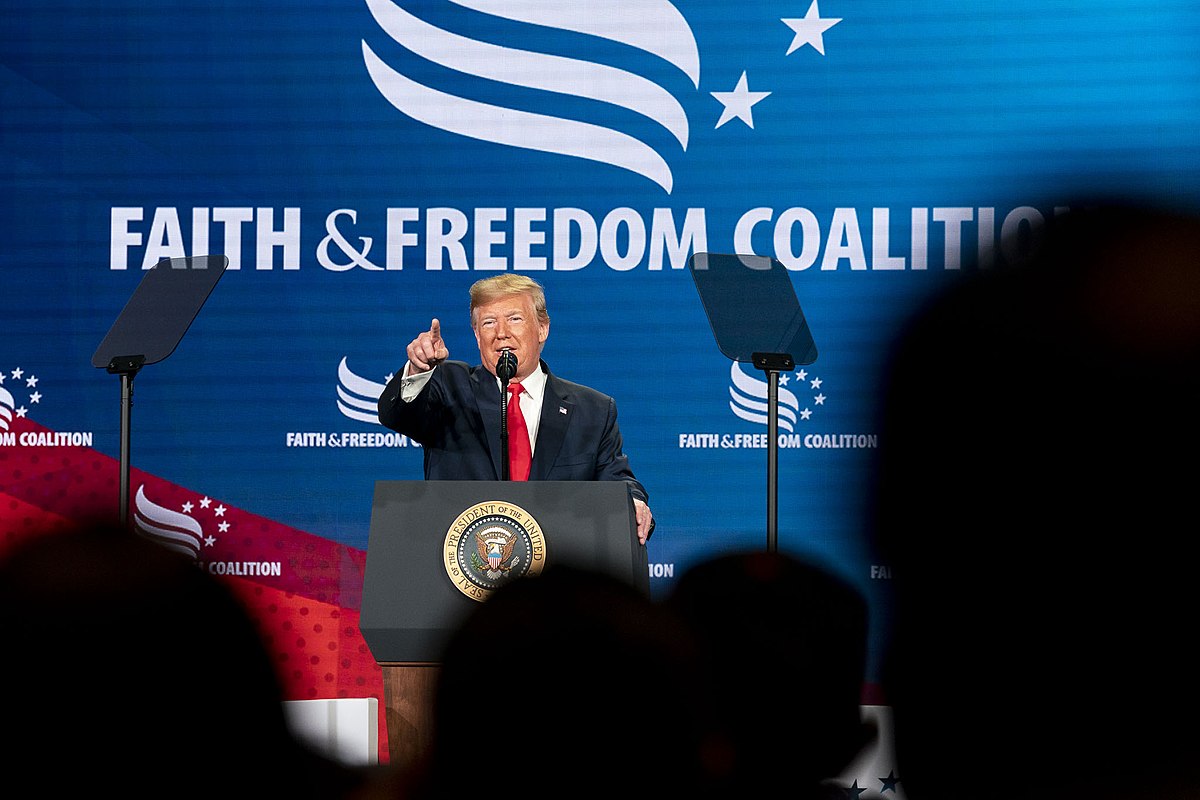 The term “Trump’s Base” has been part of the public discourse for the past four years. The standard assumption is that it consists of white working-class voters. However, is this truly the solid base that gave Donald Trump the presidency in 2016 and unwaveringly supported him and his administration? The answer to that question is somewhat more complicated.

Yes, white working-class voters dominate the overall composition of the “Trump Base,” but its sub-composition makes this voting bloc unique. According to Gallup, 41% of Americans consider themselves “born-again” or Evangelical, while 25.4% of Americans are strictly Evangelical Protestant. This religious group — Evangelicals — found in Donald Trump its new political champion.

Evangelicalism, primarily a form of Protestant Christianity, has three main characteristics. Firstly, Evangelicals believe that the Bible is God’s direct revelation. Therefore, they interpret its content literally, although they often engage in selective literalism. Secondly, Evangelicals place great importance on the process of conversion (being “born-again”). Thirdly, as the name suggests, Evangelicals are deeply committed to evangelization and bringing others into their faith. The dynamic generated by the combination of these three pillars has increasingly pushed Evangelicals to see the need for a political ally to champion their religious agenda and mission on the national political scene.

Christian Evangelicals only started playing a role in national politics in the 1970s. When President Jimmy Carter, an Evangelical Baptist from Georgia, successfully ran for president in 1976, he openly called himself a born-again Christian and related himself to the politically neglected Evangelical base. They responded, seeing President Carter as a fellow traveller who would carry their agenda forward. In return, Carter lured them out of their political stupor. Although Carter had the general support of Southern Evangelicals in the beginning of his presidency, his leadership, and in turn, his support, diminished throughout his administration as the Christian Evangelical base started seeing him as too liberal. He lost many Evangelical voters as they vilified him and the Internal Revenue Service due to a series of lawsuits, specifically Green v. Connally in the U.S. District Court for the District of Columbia. Due to this particular lawsuit, Christian Evangelical educational institutions had to either de-segregate or lose their federal tax exemptions.

Evangelical leaders were furious and felt betrayed by Carter, as they owned and profited from private religious educational institutions. Amidst all the unrest in the Evangelical community, a key player, Paul Weyrich, changed national politics for decades to come.

Before this, Evangelicals saw abortion as a Catholic issue, and many denominations, such as the United Methodist Church General Conference and the Southern Baptist Convention, even supported abortion rights as a mother’s decision. Weyrich joined forces with Evangelical leadership to change that mindset  into one of opposition. By joining the newly created anti-abortion stance with anti-communist rhetoric and pushing for prayer in schools, Weyrich and his allies mobilized the Evangelical base to become a religious-right voting bloc demanding constitutional action on the aforementioned topics.

After rejecting Carter, the emerging Evangelical religious right found their first champion in then California Governor Ronald Reagan. Although an unlikely candidate for Evangelicals, a divorced former Hollywood movie star, Reagan preached to Evangelicals with conviction. They overlooked his past and focused on his use of moral absolutes aligned with their agenda. Abortion, same-sex marriage, and restrictions on prayer were morally and constitutionally wrong. Reagan became the leader of the “moral majority.”

Although Reagan maintained a steady message for his Evangelical base, he fell short of accomplishing his promises. The Evangelical and religious right base did not fulfill their political agenda. It would take twenty-eight years  years until another candidate — Donald Trump — would again offer  a message to rally Evangelicals and the religious right into a single national voting bloc.

Evangelicals found in Trump the culmination of what Reagan started, a candidate who would fulfill their promises and outspokenly and preferentially side with them. Trump rallied the religious right  behind two main issues: abortion and foreign policy. On abortion, like Reagan’s, Trump’s approach was to repeal Roe v. Wade through the courts. The religious right received his Supreme Court nominations positively: all his judicial candidates signaled their disagreement with Roe. On foreign policy, Trump’s pro-Israel stance gained resounding support from Evangelicals, especially his desicion to move the U.S. embassy to Jerusalem from Tel Aviv. That had long been an Evangelical priority, as they see the founding of the State of Israel itself (in 1948) as a sign of the fulfillment of biblical prophecy and a hastening of the End Times and the return of Christ in glory.

The religious right and Christian Evangelical base are commonly referred to as “Trump’s Base.” This group is not the entirety of the base that supports Trump, but it is the core base which has unwavering support for him.

Evangelical support for Trump only grew throughout his presidency. His actions solidified it. This core base has a fervent religious belief behind their political ideology and it is a unique voting bloc based on religious convictions that can be mobilized as a whole in support of a candidate championing their agenda. That is what Trump was — the Christian Evangelical champion, the culmination of Reagan’s promises and a decades-long process.

With the ending of the Trump administration, a new question emerges: was Trump the apex of the promises made to Evangelicals by Reagan, or was he a stepping stone for the religious right to regain a national voice? No one can deny the importance and uniqueness of the religious right as a voting bloc. Now, with the defeat of its champion, only time will tell what impact the religious right will have.

Carlos Orbegoso is a senior at Fordham University studying Economics and Theology and a 2020-2021 Duffy Fellow.