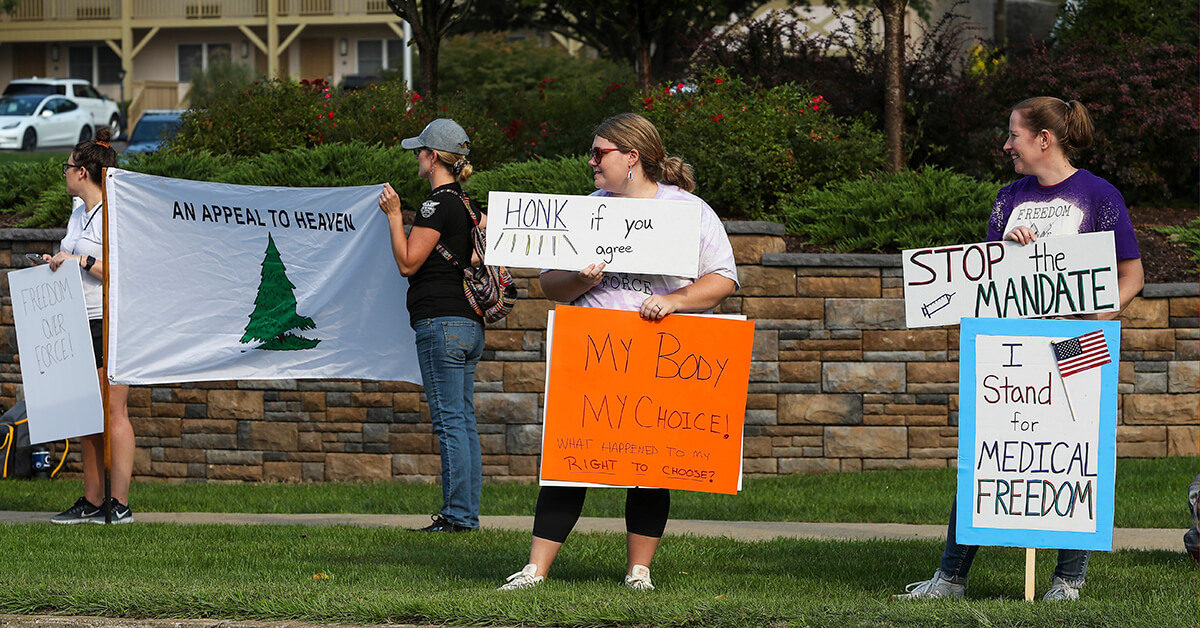 Christian Nationalists espouse a literal interpretation of the Bible, and they believe the United States is “special, chosen, and protected by God, and God’s plan is for the United States to be successful.” Their patriotism centers around their religion, for they “demand that their brand of Christianity” guide the civic affairs of the United States, and they view science as an obstacle to achieving this end.

Researchers conducted their study in response to an earlier one that related Christian Nationalist sentiment to general anti-vaxx attitudes. This earlier study, written by sociologists Andrew Whitehead and Samuel Perry, was unable to directly measure anti-COVID-19 vaccine sentiment, since they conducted their survey pre-pandemic. Whitehead and Perry, nevertheless, found a strong correlation between anti-vaxx sentiment and Christian Nationalist beliefs, providing the foundation for Corcoran and Scheitle’s recent study.

Whitehead and Perry offer a few explanations for why Christian Nationalists might oppose the vaccination effort. To start, science represents a competing “epistemic and moral” authority, so these Christian Nationalists question the role of science in remedying issues like the pandemic affecting their families and communities.

Secondly, the researchers point out that Christian nationalism upholds individual liberty and the economy over protecting populations that might be vulnerable to COVID-19.

Lastly, Christian Nationalists have a high affinity for former President Donald Trump “who is connected to anti-vaccine statements.”

The authors of this article estimate that Christian Nationalists make up twenty percent of the United States population; thus, their attitudes towards vaccine acceptance could adversely affect our goals toward herd immunity.

The researchers sought to determine whether Christian Nationalist beliefs affected COVID-19 vaccine acceptance, and they sent a survey to a nationally representative sample of Americans that included questions about religious affiliation and vaccine attitudes.

To measure vaccine confidence, Corcoran and Scheitle asked respondents whether they thought the vaccines were “safe” and “effective.” They also assessed vaccine uptake by directly asking whether or not the respondents had received a COVID-19 vaccine, and if not, whether they were planning to.

The results showed that Christian Nationalists were less confident about COVID-19 vaccine, and they were also less likely to have gotten the COVID-19 vaccine at the time the survey was given.

These findings corroborate the evidence from other studies on political conservatism and the vaccine. That is, past studies have indicated political conservatives are more likely to hold anti-vaccine sentiment and that they are less likely to comply with COVID-19 precautions like avoiding gatherings and masking.

Historically, vaccine hesitancy has been prevalent among racial minorities, and this research article in particular found evidence of decreased confidence in the vaccine among Black, non-Hispanic adults. However, this decreased confidence didn’t correlate with less vaccine uptake among Black respondents; Black Americans who were surveyed were just as likely to receive a COVID vaccine as White Americans.

Christian Nationalists, on the other hand, were less confident in the vaccine and, on top of that, they were less likely to receive one or indicate the intention to get one in the future.

Schietle further added that “When you find these issues with racial/ethnic minorities, it is more tightly grounded in issues of discrimination — either historical or contemporary, whereas for Christian Nationalists, it’s a much more global: ‘I just don’t trust institutions or I don’t trust elites in general.’”

Though the data provided in this study uncovers a correlation between Christian nationalism and COVID-19 vaccine confidence, it does not delve into the mechanisms underlying this connection. Corcoran and Scheitle suggest that further research needs to be done to further elucidate this connection and that more research is needed on how to increase vaccine confidence and uptake among this particular population.

Nevertheless, the politicization of the vaccine continues to be a pressing public health issue, and Corcoran and Schietle contend that “Christian nationalism’s anti-science, anti-vaccine, anti-government intervention, pro-Trump ideology with a focus on protecting one’s own freedoms at the expense of protecting medically vulnerable people makes it the perfect storm for COVID-19 vaccine hesitancy.”

Luke Osborn graduated from Fordham University in 2021 with a degree in Integrative Neuroscience and he is a 2021-2022 Duffy Fellow.