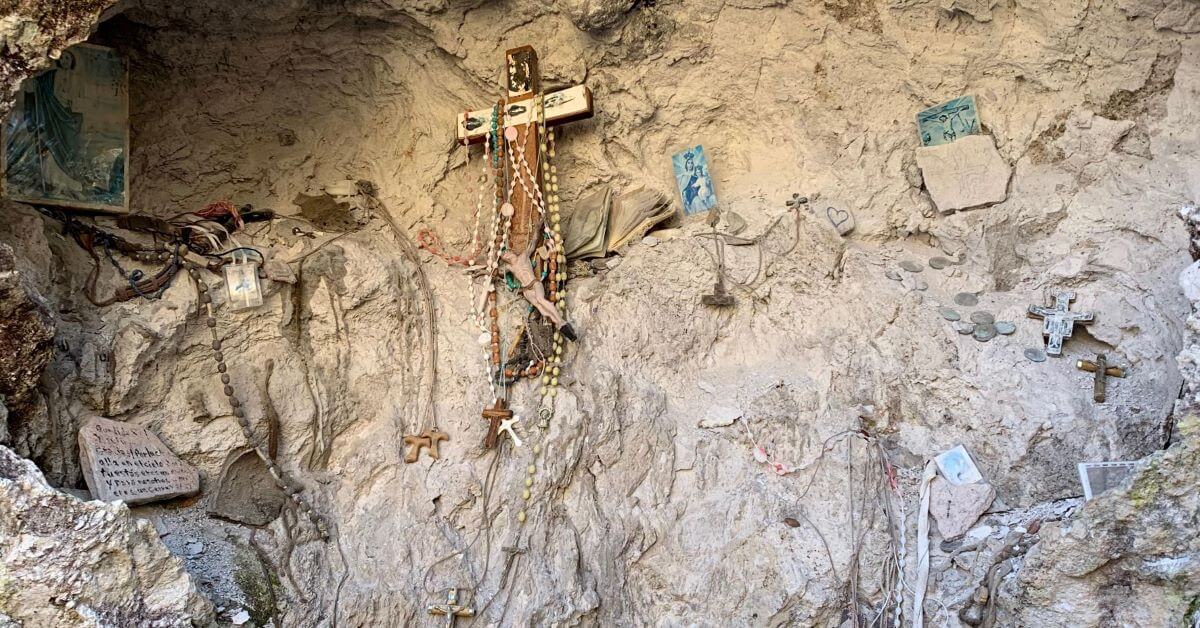 It can be argued that there is a spiritual aspect to everything we do as humans. As I traveled through Arizona early this year as a Duffy Fellow at the Center on Religion and Culture, this became more apparent than ever to me.

My good friend and research partner, Afrah Bandagi, and I were curious about the intersection of migration activism with spirituality, faith, and/or religion. We began to contact and schedule interviews with several activists in the southern Arizona region, from urban Tucson to rural Green Valley and all the way down to the border city of Douglas and Agua Prieta, Sonora in Mexico. At the beginning of January, we traveled to these places and had such meaningful, rich conversations with so many kind and generous people willing to share their insight and knowledge. We had the opportunity to experience the desert and walk where people have passed through countless times. In the land and the evidence of human contact, there was such a strong sense of spirituality and purpose.

We approached each interviewee with the disclaimer that religion and spirituality are not synonymous — religion can be the vessel through which one finds their own spirituality, but spirituality can and does exist without the presence of religion, as a separate entity, not necessarily tethered to it. There cannot be a static definition of the term, but our field research thus far has clarified my perception of spirituality and led me to the conclusion that it is what motivates someone to do this kind of work, such as migration justice activism, to keep going despite discouragement. It fuels their sense of responsibility, necessity, and urgency.

During the fall 2021 semester, I was one of the student workers involved in the Hostile Terrain 94 exhibit at Fordham’s Lincoln Center campus and I helped install and organize toe-tagging events amongst student and faculty groups. This is an interactive art exhibit displayed all over the country and started by Undocumented Migration Project. It consists of approximately 3,200 handwritten toe tags, all geolocated on a map of Arizona represented on the wall. Each tag represents a person who died while crossing the Sonoran desert in Arizona. It is by no means comprehensive: it only provides a record of the bodies which have been found. Unfortunately, many who perish in the desert will never be known.

It was an immensely moving, intentional, and quite spiritual process to hold a moment of space with each of the people whose names we were writing and recognize the humanity that has been stripped by failures of policy and avoidable violence. Feeling the tangible density of all 3,200 tags, some thickly concentrated in certain geographical areas, and the sheer quantity of people who suffered through dangerous conditions without support was revelatory; it is not easy to visualize that many people, but the exhibit forced us to see the number all at once.

During Afrah’s and my trip to Arizona, I often thought back to this experience. I still do. We were in the areas represented on the Hostile Terrain 94 map. We saw markers of where people once walked, where many people died due to neglect by the state. One activist we spoke with, Mohyeddin Abdulaziz, refuses to say that migrants “died” in the desert. The way we use language is very influential and we must be mindful of the way we phrase things; thus, he says that these people were killed because the government abandoned them and actively operates against their right to thrive. This did not have to be their fate.

There is an inherent sense of spirituality in the act of migration, itself an act of faith and hope. Everyone we interviewed noted the steadfastness and admirable spirituality displayed amongst migrant people whom they have encountered and interacted with in their work. We also saw much religious imagery along our journey —  markers of humanity and symbols of hope.

On our first day of research, we attended a Samaritan Search with Green Valley Samaritans Laurie Jurs and Barb Lemmon. After driving through the desert and seeing the border wall at the port of entry in Sásabe, we stopped by a cross placed in honor and memory of a baby boy who was stillborn on that spot. The child is called Baby Arizaga, which is perhaps the last name of his mother. There were toys, flowers, and jewelry adorning it. There was also a jar containing a poem for people to read if they encounter the spot, which we did while standing there. The cross project, Where Dreams Die, was started by a local artist, Alvaro Enciso, who is involved in this work. In places where remains were recovered, Alvaro and his volunteers place a wooden cross and items to honor the deceased person. The crosses have a red dot to show that they belong to Alvaro’s program and they are registered in the GPS system to document their set location.

A few days later, we also stopped at crosses in a desert site behind the home of Laurie Jurs and Jennifer Clarke. Some crosses say “desconocido,” or unidentified, while others bear  names. At each cross we encountered, we shouted “presente” to acknowledge the weight of the moment and state that we are present with this person and they are present in this land. Their existence was and is meaningful. These tributes stand as a heartbreaking yet crucial reminder of the profound loss that we all as a society suffer from every person’s death (let alone that person’s family). Everyone is a valuable part of the whole, and we should all be appalled and saddened when anyone is missing from that whole.

Gail Kocourek, a Tucson Samaritan whom we met with and interviewed, drew an analogy to illustrate the phenomenon of selective memory in society and who deserves mourning. There were more than two hundred deaths reported last year in the Sonoran desert — if there were a plane crash with two hundred casualties, we would all know everyone’s name and grieve those people publicly, loudly. Why don’t we do the same when these deaths occur? Why aren’t these people granted the same treatment after they pass away? Why is it not seen as a tragedy of the same magnitude? Most people are not even aware that this is happening. Why do only certain people receive the dignity of memory and respect? It is an easy statistic to ignore, so we do, while families are left never knowing where their loved ones are. This is a humanitarian crisis happening right before our eyes yet so many of us look away, because it is more convenient and comfortable to do so, to avoid the difficult work and facing the harsh reality. These people are deemed disposable by every system that works to dehumanize them.

Religious imagery came up many times throughout our trip as a symbol of hope and perseverance. On a hike with Tucson Samaritan John Heid, near Arivaca Lake on a trail traversed by migrant people, we came upon water drops that the Samaritans as well as the organization No More Deaths maintain by periodically leaving jugs of water, blankets, and food. We cleaned up past supplies and refreshed the stops with new and full items. There were rosaries hanging from the trees sheltering the resources. Upon seeing these and mentioning them to John, he informed us that he placed them there to communicate solidarity, because where there is something peaceful like a rosary, there can be no harmful intention. It signifies that they are welcome to take what they need, that it is safe to do so, and that they are not alone.

Toward the end of our hike, we came upon a shrine built over the years by people passing through that spot. It was semi-hidden and not heavily trafficked, up a vertical cliff and deep off the path. In an indentation on the rock, various items were placed to form the shrine: crosses, rosaries, prayer cards, drawings, books, handwritten sentiments, a Jesus figurine. It was so detailed. As soon as you thought you had seen everything and could look away, more items popped out, subtle, small, or blending into the rock. It seemed to be a hopeful place, a sign to keep going, perhaps a place to stop, rest, and pray.

Through all of our experiences in Arizona, spirituality was a constant, even when less explicit or religious. The spirituality of the migrant people was clear with the shrine and memorials, and beyond Christianity, demonstrated a common humanity, a bridge between two individuals who will likely never meet one another, an act of encouragement and support. This common humanity, the personal obligation to save lives and be there for your fellow man was a spiritual purpose for the activists; they feel they have no choice but to continue doing it.

Each human deserves a full and content life, a door opened to them in time of need, and to not live in constant fear of losing their loved ones. Along the journey of migration and in every position relative, spirituality is an aspect that makes present the potential for endurance in an unjust situation, a difficult environment, a feeling of hopelessness. It allows for a sense of purpose and a crucial bond, whether subconscious or palpable, between people of every circumstance.

Madeline Hilf is double-majoring in Music and Film at Fordham University and she is a 2021-2022 Duffy Fellow.