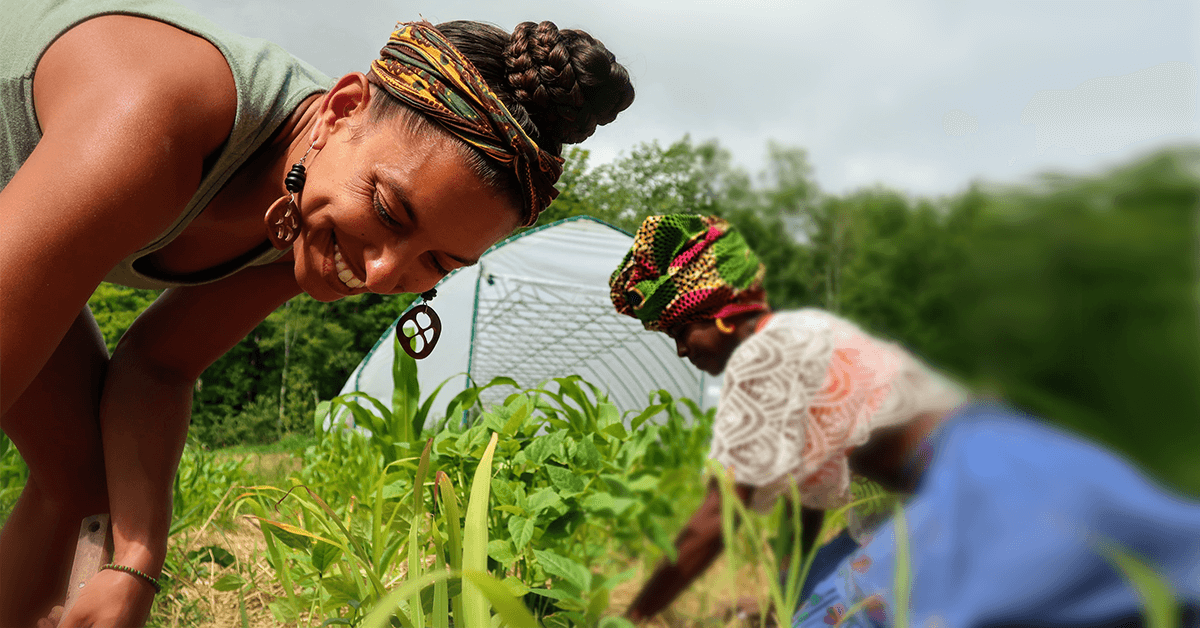 “… for the sake of thought blacks must now freely accept for themselves that which in a previous history they were forced to undergo.”

During an April 21, 2020 webinar hosted by the Center on Religion and Culture at Fordham University, Leah Penniman, the co-founder of Soul Fire Farm, urged eager listeners to consider the healing power of the Earth and the role that farming can play in struggles against the lasting effects of settler colonialism and enslavement. It was a powerful message at a critical moment in our history, and it’s a message that Soul Fire Farm embodies.

Dedicated to the work of food sovereignty, Soul Fire Farm is one of many groups within the United States that are working to establish grassroots alternatives to the food systems of the planet. As Penniman recounted in her talk, the global food system is built on modern practices of land theft and the disenfranchisement of non-European life ways. Soul Fire Farm confronts these traditions of oppression not only through food sovereignty initiatives, but also through spiritual processes of reconnecting the dispossessed with the life forces of the Earth.

As a spiritual activity, Soul Fire Farm(ing) is guided by what Penniman refers to in her book, Farming While Black, as “the multiplicitous way of knowing the Sacred.” The multiplicitous way regenerates the faith traditions of African diaspora peoples who made room for the diverse notions of divinity that were brought together in the context of enslavement in places like Haiti, Jamaica, the U.S., and Brazil.

What we now understand as Haitian Vodou was a deeply relational system of faith that made room for Ewe, Fon, Kongo, Ibo, Yoruba, Taino, Catholic, and other perspectives on the sacred. Soul Fire Farm regenerates the Earth focused practices of these faiths in order to reconnect Black Americans, in particular, to the spiritual forces that enveloped their African ancestors within the sacred life forces of the Earth.

While it may not be apparent at first glance, the work of Soul Fire Farm and similar organizations are providing alternative pathways to a future beyond racial domination. Key in this work is a commitment to delinking from what critical geographer, Kathrine McKittrick, describes as the geography of the plantation.

Soul Fire Farm’s practice of food sovereignty and reconnection with the Earth reminds the human family that chattel slavery and the economy of the plantation is a spatial violence. Penniman’s insights, similar to McKittrick, point to a new way of remembering the plantation as a vision that replaced the imagination of the Americas as a space which, according to McKittrick, was at once “nowhere and inhabited by no one.”

Once Europeans realized that the lands of the Americas and Sub-Saharan Africa were indeed some place and inhabited by some one, another geographic vision of the west emerged. This new vision of the west looked to make sense of the lands of “nowhere” and the bodies of “no one.” The racialization of human labor under the plantation economy figured heavily in how European colonialists made sense out of the lands and peoples of Africa and the Americas. The current struggle against racial oppression in the U.S. is deeply tied to this history and is challenged by the need to create a future in what literary scholar and historian Saddiya Hartman describes as the “afterlife of slavery.”

The afterlife of slavery that marks our present moment is animated in the uprising following the killings of George Floyd, Breonna Taylor, and Ahmaud Arbery, in the summer of 2020 as well as the “insurrection” at the White House on January 6, 2021.

In the face of these events, reconnection with the earth might seem like a kind of escape from the critical work of anti-racism. However, Soul Fire Farm clarifies that the work of reconnecting to the Earth is at the nerve center of carving out an alternative afterlife to racial domination. Racial domination, the plantation, and their afterlives, are a failure of intimacy. What is racism if it is not a failure of intimacy?

In her responses to the questions raised by three Fordham students (Rachel Coyle, Anthony Nunuez, and Sydni Britton), Penniman mirrored the issue of intimacy as she talked about the importance of building community and deep connections with the Earth. These practices decenter the plantation economy and regenerate the sacred practices and knowledges of the planet that were ravaged by bottom-line capitalist interests.

The fact that food sovereignty has not figured heavily in the popular conversations about systemic racism and anti-racism in the U.S. is a sign of the power of capital to determine how we understand freedom. The healing work of Soul Fire Farm is radically alternative in that it centers relationships of substantive reciprocity in ways that mimic, as Penniman poetically and biochemically explained, the relational economy of the forest. Soul Fire Farm is a healing practice that critically understands the profound ways in which plantation economies force vulnerable humans, top soils, flora and fauna, to engage in the intimate act of touching while simultaneously preventing the possibility for a deep intimacy in the act of touch.

Penniman’s talk rang true with prophetic fire as she evoked the wisdom of the forest as an integral component in the struggle against racial oppression. With wise counsel she cautioned that turning to the land is not a utopian vision but a practice of facing a long duration of historical trauma.

As history of religions scholar and former president of the American Academy Religion, Charles H. Long, wrote in the introduction to his influential study Significations, “for the sake of thought blacks must freely accept that which in a previous life they were forced to undergo.” Soul Fire Farm has surmounted a powerful option for rethinking and enacting an alternative future for the afterlife of slavery. As a radical alternative to the “necropolitics” of global food systems, Soul Fire Farm is a well spring for intimate reconnection with the Earth, especially for those struggling against dispossession.

As Penniman shared through the powerful image of her ancestors braiding seeds into their hair before entering the abyss of chattel enslavement, farming while black is an insurgent act of survival—an act that should call humans of good faith to recover the sanctity of food in the afterlife of slavery.

Rufus Burnett, Jr. is an assistant professor of theology at Fordham University. He is the author of Decolonizing Revelation