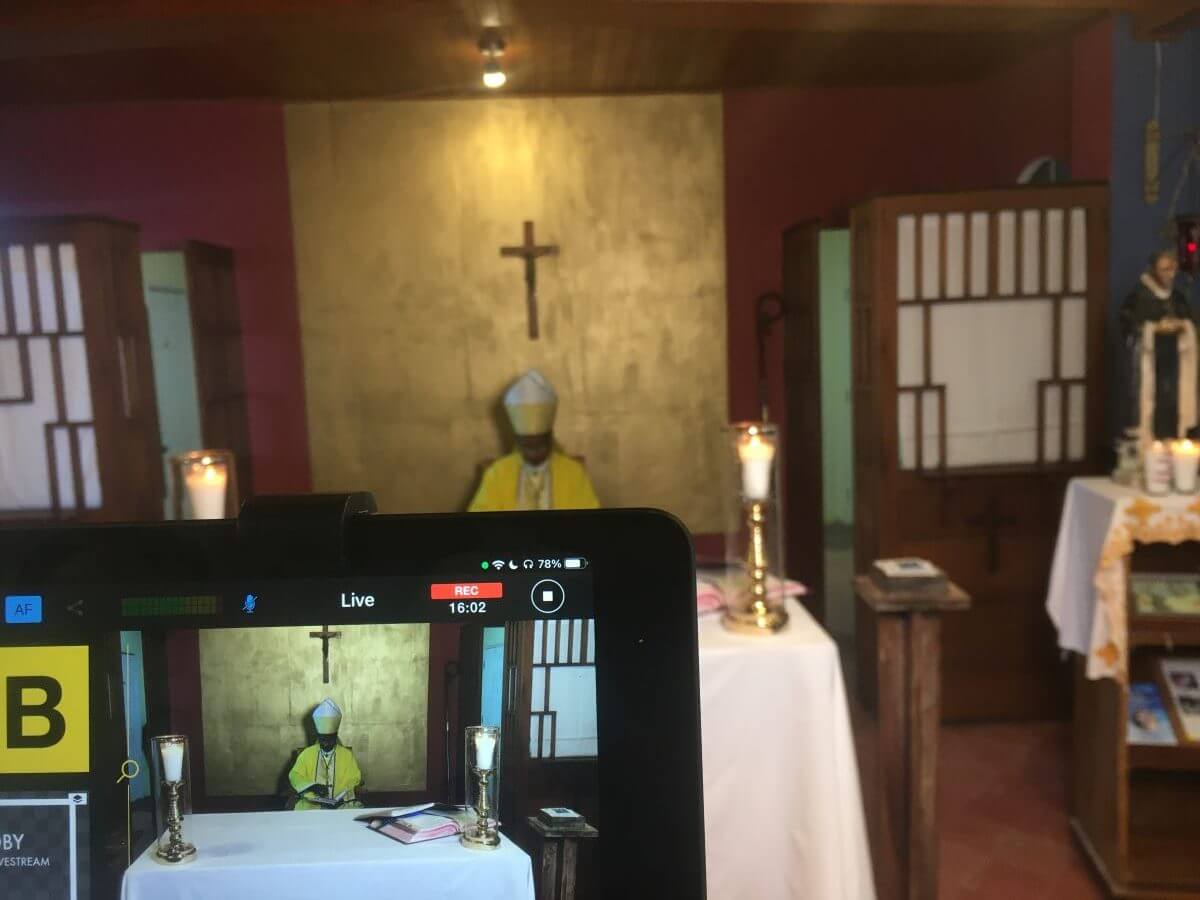 I don’t usually dance at Mass. It’s not that I don’t find the Mass a joyful experience. I do. But I usually experience that joy relishing and reflecting on what’s happening in the Mass: God becoming present. Since I moved to the Central American nation of Belize, however, the rhythms of the local liturgical music and the joy of my fellow worshipers have unexpectedly changed my ingrained habits.

I’m a pretty typical American Catholic who grew up on mostly Seventies Era hymns at Mass (think “On Eagle’s Wings”). That’s not a bad thing, but the music at Mass here in Belize just has a livelier energy to it, although I have yet to enjoy the full experience. Here, like most of the world, pandemic measures are in full effect; the number of congregants is limited and I spend much of the liturgy watching through a video camera viewfinder.

Belize, a small country located on the Caribbean coast of Central America, was in lockdown for the better part of 2020. My mission assignment to Belize was to begin in August, the start of my regency. That is the stage of formation which requires a Jesuit to go live and work full-time in a Jesuit apostolic community. (Yes, the many steps of Jesuit “formation,” as we call it, can be confusing even for Jesuits. Here’s a handy guide written by my confrére, Jim Martin, SJ.)

My arrival was delayed, however, because Belize kept it’s international borders closed until this past October.

The country remains on lockdown, so the only experience I’ve had of the Mass so far are the livestreamed liturgies celebrated by the Jesuit parish in Belize City, St. Martin de Porres. And, since I’m not particularly good at dancing, it’s a good thing I’m behind the camera running these livestreams.

Much of the congregation of St. Martin de Porres Parish (referred to simply as “Mah-tins” by Belizeans) is Creole and Garifuna. Creole, generally speaking, refers to ethnic groups with origins in West African, European, and indigenous peoples. Garifuna are the descendants of West Africans and the indigenous Arawak people of St. Vincent Island, located hundreds of miles to the east, off the coast of South America. There are Garifuna communities throughout Central American and the Caribbean, in Belize, Honduras, Guatemala and Nicaragua, as well as the United States.

I was fortunate enough to arrive in Belize in time for Garifuna Settlement Day, a national holiday celebrated every year on November 19th. It commemorates the arrival of the first Garifuna to Belize in 1832. Garifuna history is a much more complex saga than I can relate here, but the exile of the Garifuna from St. Vincent Island was the work of  British colonizers who had been warring with the Carib peoples of St. Vincent Island for decades: there had been two so-called “Carib Wars” (1769-1773 and 1795-1797) and the Anglo-French War (1778-1783) during which the Carib peoples allied with the French against the British. These, as well as the American Revolution, were all parts of the global conflict between the British and French empires. In 1797, the victorious British sent thousands of Black Caribs, who later came to be known as the Garifuna people, to an island off the coast of Honduras.

If it weren’t for the resilience and indomitable spirit of the Garifuna people, this day might otherwise be an occasion for mourning. And that would be understandable, given all that the Garifuna suffered. But the Garifuna have reclaimed it as a moment of celebration. The livestreamed Mass we celebrated on November 19th reflected that spirit. You bet I was dancing.

Fr. Brian Christopher, current superior of the Jesuit Mission in Belize and former pastor of St. Martin de Porres Parish, shares this sentiment. “The heart of the Garifuna Mass is celebration,” Brian told me. “They take celebration very seriously in ways that Anglo-Catholics don’t quite understand. The drumming, the dancing, the singing—that’s such a central part of the Garifuna liturgy … it’s hard not to want to dance and sing when you’re there.”

The drums that Brian mentioned are not just an important part of the Garifuna Mass, they are central to Garifuna culture and spirituality in general. I spoke with Melissa Zuniga, a Garifuna woman and Project Coordinator for the National Garifuna Council of Belize. She says the drums serve the important purpose of connecting the Garifuna people to their history.

Zuniga said they had to be careful playing the drums for Garifuna Settlement Day celebrations this past November.

“No matter what you’re doing, when you hear those Garifuna drums, there’s something about them that calls to you,” Zuniga said, “We had to take more precaution when playing [them] because people hear those drums and they want to be close, they want to sing, they want to dance.”

Zuniga also told me that these Garifuna Masses draw large crowds of people, particularly people who aren’t otherwise usually coming to Mass. She thinks this is because people are drawn to experiencing their own culture and language. And that desire draws them to an experience of faith.

“For some [attending Mass] may not be about spirituality at first, but eventually, when they learn the songs, it helps them to work on their faith,” Zuniga said, “Because it celebrates in a culture they know and understand, and they’re closer that culture, it helps them to understand the faith.”

Our local bishop, Lawrence Nicasio, a Garifuna man himself, celebrated the Garifuna Settlement Day liturgy in vestments using the national colors of Belize. The yellow and black were not exactly standard liturgical colors for the season, but close enough — and closer to the people he was preaching to.

I think it’s easy for Anglo-Americans to overlook the importance of inculturation of our faith because we so easily embrace the European-infused Roman rite. Anglo-Americans, by-and-large, share those same cultural foundations and it can seem like the default mode of proper Catholic worship. Too often that experience leads us to dismiss or even demean the liturgical practices of other cultures, or, rather, of our fellow believers who simply bring a different cultural lens to our shared faith and worship.

As the liturgy expert and Commonweal writer, Rita Ferrone, explained in a recent essay on Pope Francis’s encouragement of liturgical inculturation:

“[Inculturation] is the insertion of liturgy into a given culture in such a way that the liturgy absorbs the culture (and is thus able to speak from within the culture) and the culture absorbs the liturgy (and thus the Christian faith upon which it rests becomes more deeply integrated into the social fabric and worldview of that society).”

I’ve seen that first-hand as I’ve had the privilege of encountering so many other Catholic faces: indigenous Mayan, Amazonian peoples, African American, and, most recently, Garifuna and Creole. And I have seen the Mass through their eyes, through their lives.

That has made me appreciate more than ever Francis’s forceful encouragement of liturgies that respect local cultures and practices. As the pope said in his exhortation after the wonderful (if, sadly, controversial for some) Synod on the Amazon: “What is needed is courageous openness to the novelty of the Spirit, who is always able to create something new with the inexhaustible riches of Jesus Christ.”

It’s that Spirit that communicates God’s beauty, ever ancient, ever new.

Ian Peoples is a Jesuit Scholastic working as a campus minister and prison chaplain in Belize City.