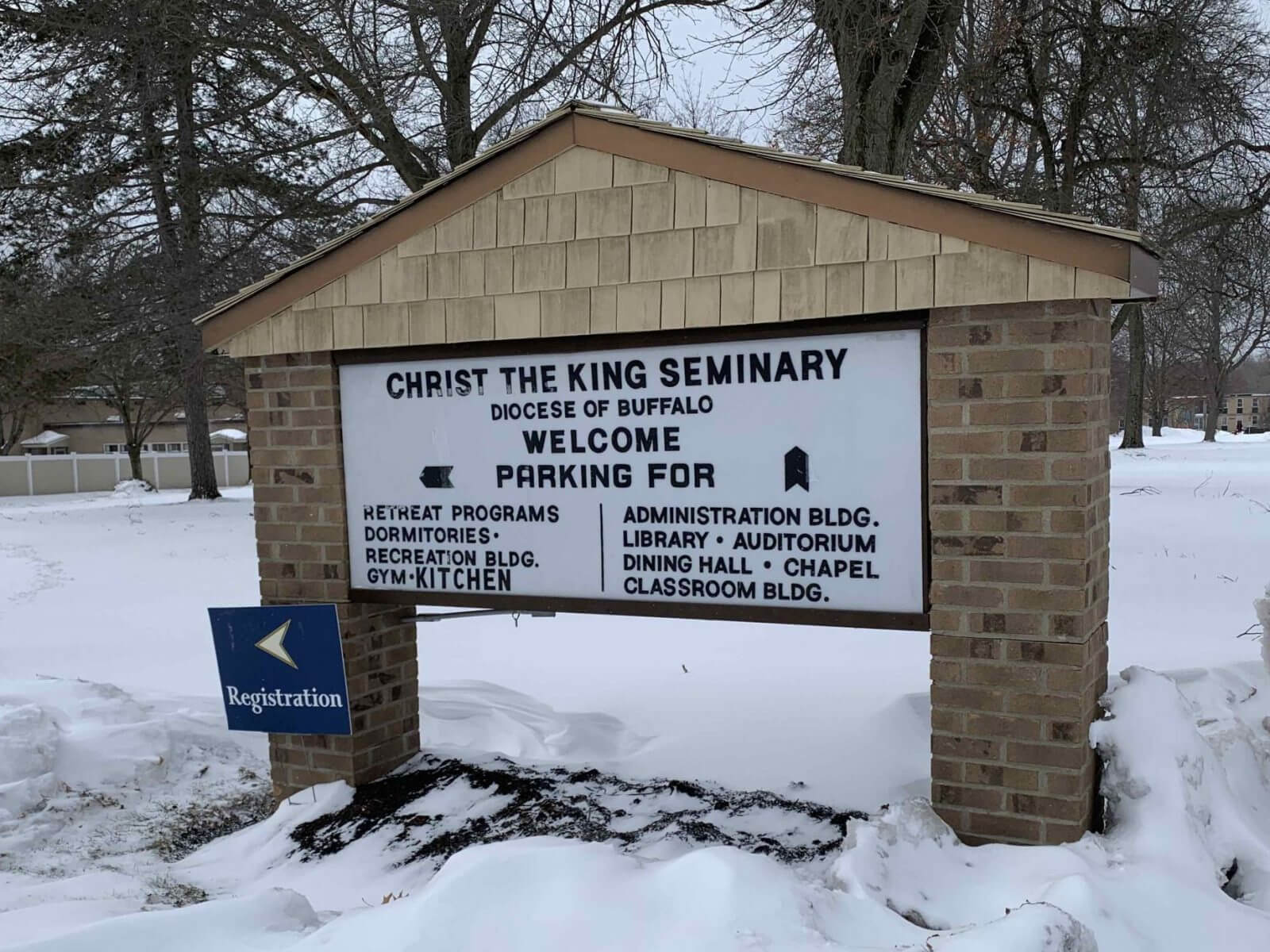 Timing is everything, and it’s one of those clichés that journalists should always avoid. Except when we can’t. My recent visit to the Roman Catholic Diocese of Buffalo to take part in a conference at the diocesean Christ the King Seminary qualifies as an exception to the rule, I think.

I was honored to be asked to give a keynote talk for the 3rd Annual International Conference for Collaborative Philosophy, Theology, and Ministry, which aimed at “bringing together some of the most creative minds working in theology and ministry today.” What I was doing there, much less addressing this audience, was the question foremost in my mind. I titled my talk “Communication and Conversion: Notes – and Hopes – for the Future of the Catholic Mission,” and I thought I would offer a few reflections on my own conversion, on the complex relationship between the media and the church, and how those two arenas might work for–rather than against–the common good.

Going into the event, there was a tentative sense of optimism that the beleaguered Diocese of Buffalo might be catching a break after years of turmoil. In December, Bishop Richard Malone had finally resigned following a tenure marked by abuse cover-ups, persistent dissembling, and an approach to his flock and the public so tone-deaf you’d have thought he was living in the pre-scandal days of Cardinal Bernard Law’s Boston – which was in fact where Malone was from and when he was first made a bishop.

Malone seemed to bring that pre-2002 sense of clerical entitlement (think of the culture that led to the events in the film “Spotlight”) with him to Buffalo, and it was only due to diocesan whistleblowers and local journalists that a Vatican-sponsored investigation was launched and wound up forcing Malone to leave.

Albany Bishop Edward Scharfenberger was named apostolic administrator, an ecclesiastical term meaning he is an interim placeholder until a suitable replacement can be found. Scharfenberger was amiable and open with the press, an immediate breath of fresh air.

Well, as luck, or Providence, would have it, the respite was even more fleeting than anyone thought. Just three weeks before the start of our  conference, Scharfenberger suddenly announced that Christ the King Seminary would be shuttered at the end of the school year in May. The 163-year-old institution had been running in the red, yes, but it was the diocese that was in a financial meltdown thanks in large part to Malone, who had overseen a $5 million operating deficit in the deficit the previous year in large part to a precipitous drop in donations.

The rural campus has twenty-six  men enrolled as seminarians with fifteen from the Buffalo diocese and the rest from New York State, New Jersey, and Ontario, Canada. . In addition, thirty-six people were training for the permanent diaconate and various lay ministries. Now almost all of them were trying to figure out where they will be studying next year. The dedicated faculty – many of them lay people – were scrambling to find work.The closing came just after the hiring season in academia ended, making their job search that much tougher.

Then, two days before the conference came news that Bishop Scharfenberger inexplicably celebrated Mass with several Buffalo priests who have been credibly accused of sexually abusing children or other boundary violations. It was astonishing and creepy, since these men should have been out of ministry. Scharfenberger apologized. But the damage was done.

The snowfall that slammed Buffalo on Thursday, the day before the conference opened, seemed to be the final insult. I’d grown up on televised images of Buffalo buried in snow, so I figured this was standard. But, in fact, this was the first serious snowfall of the season. Still,  almost all of us managed to get there in spite of various travel snafus.

Then, just as I was being introduced for my talk on Friday morning, February 28, the diocese announced that it was filing for bankruptcy in the face of expected lawsuits from clergy sex abuse survivors.

Well. As one exasperated participant put it, “I don’t even know how Jesus gets in the room. Maybe he’s trying to slip in the window or something.”

What else could one say? What was there to say? The show must go on, and so it did.

I gave my talk, and the other presenters delivered genuinely stimulating and creative presentations. But here’s the thing: The rest of the conference was not an exercise in pantomime, of people just going through the motions or pretending all would be well.

The gathering of some seventy scholars, pastors, and ministers from across North America and beyond was in itself an answer  to the gloomy news. The institutional reality is what it is. There is no sugar-coating the pain and injustice that decades of clericalism have wrought, as several Catholics noted on social media:

And yet the sense of solidarity in being with a diverse group whose members voiced varying views on a range of topics – always with charity and illumined by sharp intelligence, deep faith, and a shared dedication to the common good – was incredibly heartening. It showed what the Church is, and what it can be. My opening remarks could not convey any of this, but by the end of the two days together the message was clear and it did not need to be articulated: Jesus gets in, by the window if not the door, maybe through the walls.

The sense of determination was embodied most powerfully and poignantly by one of the conference organizers, Father John Mack, a 66-year-old Buffalo priest who has taught theology at Christ the King for the past thirteen years. For the last five years, Father Mack has been living with what’s called “non-alcoholic cirrhosis of the liver” and in recent months he has entered a critical stage – ill enough to qualify for a donor liver, but also facing death if a donor cannot be found in time. The closing of the seminary and the wrenching travails of the diocese piled on top of his own health crisis just as the conference opened did not deter Father Mack, a gracious host who created the space for this community to coalesce.

A final note: The church needs an institutional expression to help foster and shape communities like this. The body blows sustained by the seminary and the Buffalo diocese in these days showed not only the resilience and value of Catholicism, but also the extent of the damage suffered. It’s too easy to lose sight of this amid the drumbeat of discouraging church news.

Yes, the students and faculty and clergy will disperse and will find other paths and other communities. But let’s recognize that this was a successful and effective conference launched just three years ago by a seminary whose program of formation for priests and deacons as well as lay people looks like a model  of the healthy, collaborative, integrated, mission-oriented education that will serve the church of the future.

Let’s  pray that this conference can find a resurrection next year, likely in a different place, but hopefully with the same Spirit.