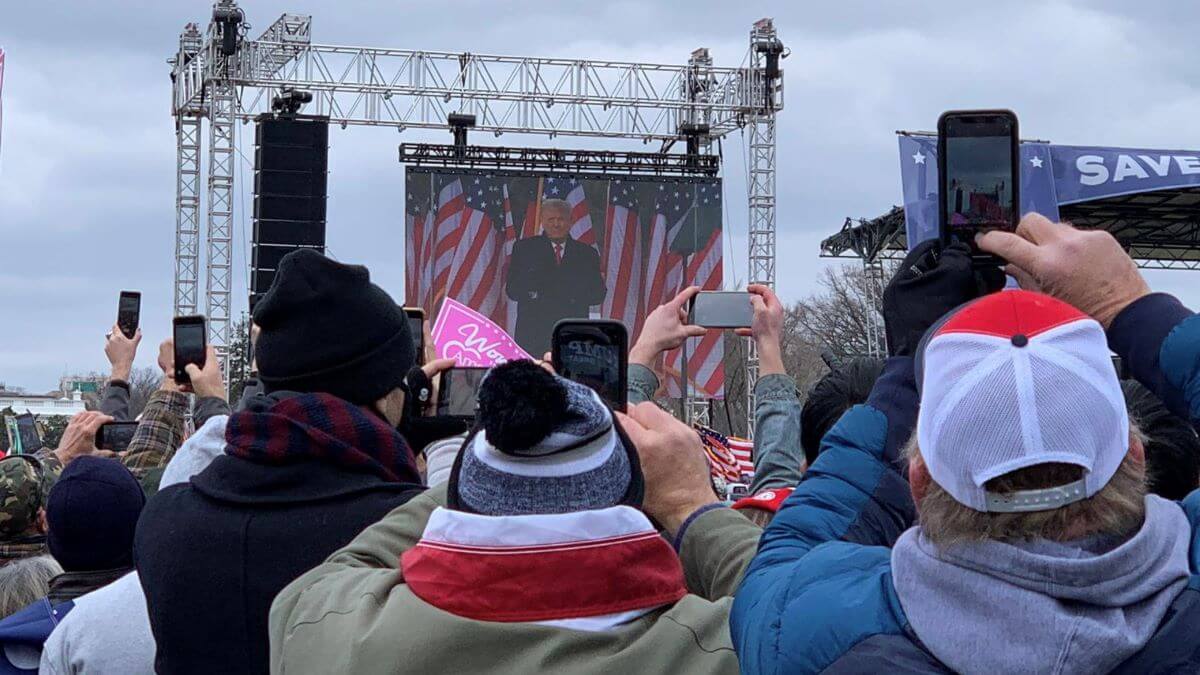 In light of last Wednesday’s violent and deadly storming of the United States Capitol by a mob egged on by President Trump, government officials, scholars, legal experts, and business leaders have called for the president’s removal ahead of the inauguration of President-elect Joe Biden on January 20.

The best-known avenue to removal is impeachment; in fact, Trump was impeached by the House in December 2019 but the Senate refused to convict him, and he stayed in office.

Today, with time short and the situation dire, in the view of many, some are advocating for the unprecedented use of the 25th Amendment, which was adopted in 1967 to clarify issues of presidential succession and removal in case of disability.

The emeritus dean of Fordham University’s School of Law’s, John Feerick, played a key role in drafting and promoting the 25th Amendment to the U.S. Constitution. Visiting Clinical Professor John Rogan, co-created the Maloney Library’s Twenty-Fifth Amendment archive and taught a presidential succession clinic with Feerick at the law school.

CRC Assistant Director David Goodwin talked with Feerick, who is the Sidney C. Norris Chair of Law in Public Service and author of The Twenty-Fifth Amendment, and Rogan about the 25th Amendment, its history, and its possible application in the waning days of the Trump presidency.

This conversation has been edited for length and clarity.

David Goodwin: Dean Feerick, you played a key role in the movement initiating what became the 25th Amendment. What is the history of this constitutional amendment and what motivated the discussions surrounding its debate and its passage?

Dean Feerick: I would point to a ten-year period involved in the development of the 25th Amendment, even though it has a much earlier history in terms of its origins. That period begins in the middle of the 1950s when issues started to arise concerning the absence of any process, or any protocols you might say, to deal with the illness of a president. President Eisenhower at that time had a heart attack, and subsequently had a stroke. As illness and the mortality of presidents became clearer [issues], Congress started to have hearings on the subject, the president’s inability [to perform his duties]. They received testimony and had assistance from historians, and political scientists, and others involved in government who had different approaches to dealing with a president’s inability.

There had been a lot of reform proposals in the 1880s when President Garfield was assassinated. [Ed. note: James A. Garfield was shot and wounded on July 2, 1881 but his vice-president, Chester A. Arthur, was not sworn in as president until Garfield succumbed to his wounds ten weeks later, on September 19, 1881.]

Then we came back to focus on that subject, not as extensively, in my opinion, when Woodrow Wilson had his stroke. [Ed. note: President Wilson suffered a severe stroke in October 1919, but the seriousness of his condition was withheld from the public for months.] But what was happening with President Eisenhower was that the world had changed. We had nuclear weapons now, and you had a president who believed in chains of command. All of that gets merged together in a movement that says we should have some protocols and some methods of dealing with the disability of a president.

Then the President of the United States [John F. Kennedy] was assassinated [in 1963].  If you read the history at that time, there was a lot of focus on what would have happened if President Kennedy did not die, but had been disabled. How would we have dealt with that since the constitution had very little clarity about what was an inability? What was the status of a vice president who tried to serve as an acting president in the absence of the president, and who really had the authority to judge an inability or not.

All of those questions existed at that point when Kennedy was assassinated. Senator Birch Bayh (D-Indiana, then Chairman of the Constitutional Amendments Subcommittee) had taken some of the ideas from the Eisenhower period and shaped it into a draft, a proposed constitutional amendment. The first action in history on the 25th Amendment was September 28, 1964. By July 6, 1965, it’s out to be ratified by three-fourths of the states. And it gets ratified in February of 1967.

DG: What exactly is the 25th Amendment? How is it intended to work? What issues of presidential succession is it structured to resolve?

DG: The 25th Amendment has four sections. What are they, briefly?

Feerick: The first section deals with status in terms of presidential succession. What do I mean by that? Suppose a president dies in office, resigns from office, or was removed from office. And the vice president steps up. Section 1 talks about death, resignation, removal. It separates out entirely the inability of a president.

Section 2 fills in the vacancy in the vice presidency. Section 3, you could almost say, reflects the protocol that Eisenhower and Nixon had developed, which is to say that a president could say to a vice president, “I’m not up to doing the job right now because I have to have an operation tomorrow. I’m going to be unconscious as they remove the polyp in a colonoscopy or some other surgery.”

So a president can say: “I need you, Vice President, to assume my powers and duties until I tell you I’m able to go again.” And so that the nation will be secured by the fact during when I have an operation, I’m unconscious, whatever the situation might be, there will always be somebody at the center of our Constitution as a chief executive, even though you’re an acting chief executive.

DG: Section 4 is the issue at the heart of the current debate over whether to remove President Trump.

Feerick: Section 4 now deals with the subject of the president’s inability. It says that the vice president and a majority of The Cabinet —  it’s fifteen, the majority is eight — eight votes of eight individuals have the power to say a president is unable to discharge the powers and duties of the office.

DG: Taking that all that into consideration, does the ongoing situation in the White House with President Trump meet the standard for invoking the 25th Amendment?

Feerick: Well, it’s a safety net in the system. It’s really up to the vice president and The Cabinet to decide when the president’s unable, in their view, to discharge the powers and duties.

DG: Is there any penalty for the vice president if he refused to go along with it, or is it purely a voluntary action on his part?

Feerick: No, that’s his judgment. The Constitution doesn’t allow people to take away his judgment on that kind of question.

DG: Has the 25th Amendment been invoked fully or partially in the past?

The second time was, ten or eleven months later, President Nixon resigns the presidency and Ford goes up and becomes the new president. That’s Section 1 of the 25th Amendment, succession. Then Ford fills the vacancy in the vice presidency by choosing the governor of New York, Nelson Rockefeller. That’s the third time. In that time period, you’ve got three uses of the 25th Amendment.

The next use of the 25th Amendment came in 1985 when President Reagan had to undergo an operation, surgery, during which he would be administered anesthesia, and he would be unconscious. He wrote a letter transferring his powers and duties to the vice president, Vice President [George H.W.] Bush, saying that, “You have the power and duty of the presidency until I tell you I’m okay again.” So that’s a Section 3 use. And that wasn’t very long. And so President Reagan had the operation, and as soon as he could he signed the letter saying, “I’m ready to resume my powers and duties.” And I think it was less than twenty-four hours. And so that’s another use.

Then, twice during the George W. Bush administration, he [President Bush] used the Section 3 process when he was undergoing medical procedures. So, that’s the six uses of the 25th Amendment.

John Rogan: It’s been something that a lot of members of the media have been able to use as they’ve been covering the Amendment. One of my favorite examples was a Washington Post story that looked at how the movie and book, The Caine Mutiny, influenced the Amendment’s drafting. A reporter called Dean Feerick and asked about the impact of that story. It was first a book, then a movie about a Navy captain whose crew ultimately lost confidence in him when their ship was caught in the middle of a pretty serious storm. And they [the crew] removed him from his command. The book had come out in the 1950s. It was something that was actually on members of Congress’s mind when they were drafting the Amendment.

The reporter was able to go into the archives and find different mentions of the movie or the book in the legislative history. That became the focal point of an entire article in the Washington Post. That’s just one example. I think it’s also been helpful to scholars who were researching the Amendment and just members of the public who want to learn a little bit more about it. Because in addition to these hundreds of pages of legislative history, there’s some pretty accessible features, too, such as the timeline that describes the key moments in presidential succession and inability history.

DG: Last question. Does the 25th Amendment need to be amended further, in your view?

The main inspiration for the presidential succession clinics was that there are these remaining gaps in the presidential succession procedures in the Constitution. It’s not that the framers of the 25th Amendment didn’t realize [there were these gaps], but there were just various practical and political challenges to solving every problem. The clinic looked at the fact that there’s no procedure for declaring the vice president unable [to perform their duties], which based on what Dean Feerick was saying before, is a pretty serious problem because the vice president is an indispensable participant in the 25th Amendment procedures.

Similarly, there’s no procedure for a situation where both the president and the vice president are disabled. The students put forward recommendations for closing those gaps in the procedures. We also looked at a scenario where Congress needed to resolve a dispute between the vice president and the Cabinet on one hand and the president on the other, over whether the president was incapacitated. The 25th Amendment sets out a procedure for doing that. But Congress has never really given any thought to how they would handle that situation. The students developed all the different procedures that Congress should follow in the twenty-one days that the 25th Amendment gives Congress to resolve that dispute and decide if the president can return to power.

Q: You also note that there is a lack of clarity about the line of succession in government. [It’s even the plot line of a popular TV series, “Designated Survivor.”]

Rogan: There’s plenty of criticism of the law that creates the line of succession. Because right now the Speaker of the House and the President Pro Pempore of the Senate are at the top of the line. The speaker could be from an opposite party of the president, which could lead to a change in party control of the White House, which a lot of people think is undemocratic. That was just one concern about the line of succession that the clinic addressed.