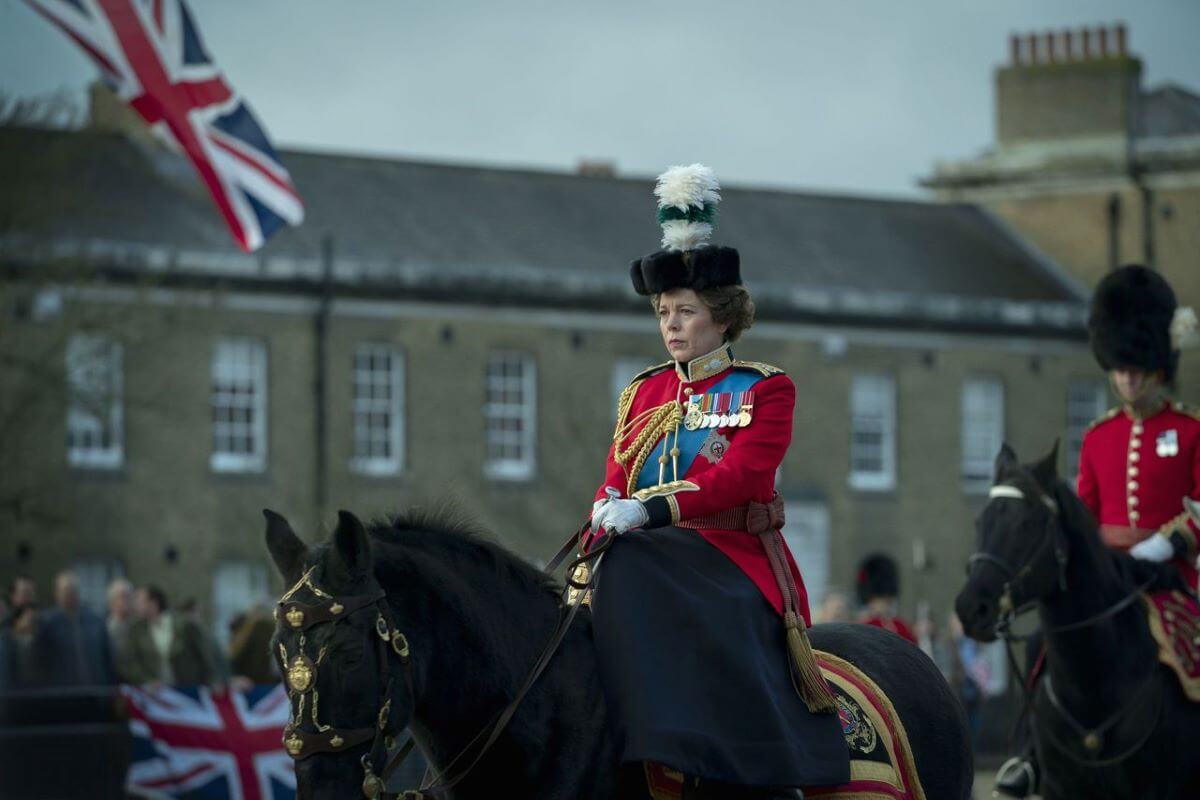 Season four of The Crown, Netflix’s big budget, bigger buzz historical drama about the life and times of Queen Elizabeth and her family, opens on the Queen, bedecked in a crimson military uniform as she rides out of Buckingham Palace as part of the annual Trooping of the Colors ceremony. Meanwhile, we hear a member of the Irish Republican Army arguing for the need for violence resistance in voiceover.

In a season dominated by the stories of Princess Diana and Prime Minister Margaret Thatcher, this moment hardly seems important. And yet, it captures what this season is about – the stories we tell ourselves, the competing fairy tales by which we live. Representing the fantasy of royal life is Diana. When first we meet her, she is dressed as a fairy from A Midsummer Night’s Dream. Wearing a mask and hiding behind pillars, she gazes on Prince Charles with the fascination of a little girl who has been taught all her life of the wonder of being a princess.

He’s twenty-nine, she’s sixteen, but in fairy tales age is not important. Love really can happen at first sight, and the horrible family is the one you escape, not the one you marry into. As one would expect, much of season four is an exploration of what happens when this fantasy smacks up against the reality of being married to a prince in love with another woman and entering into a family in which human relationships come at best a distant second to duty and convention. In many ways, this is the most brutal season of The Crown, for Diana especially but also for Charles, who continues to search for some place for himself in his family, and finds himself ignored, dismissed, or bullied into submission.

One of the abiding insights of the series is that no one touched by the Crown comes out undamaged. If this is a fairy tale, it’s about a curse, not a treasure.

On the other end of the season’s stage we have Margaret Thatcher, who seems the polar opposite of a fairy-tale character. Indeed, she spends the season delighting in ridiculing  anything remotely akin to idealism or human kindness. She’s the first character in the series to blatantly ignore some of the conventions of the Crown. She repeatedly interrupts, talks over, and lectures the Queen, so much that Elizabeth seems ready to pop during a few scenes. (The moments between actors Olivia Colman (Elizabeth) and Gillian Anderson (Thatcher) are some of the best in the entire series.) Elizabeth has never had a sparring partner like Thatcher.

But even as Thatcher imagines herself as the tough-talking truth-teller tearing down the country’s naive fantasies, she is selling her own, built out of her adoration for her strict teetotaling father and upbringing. People succeed or fail by virtue of their own labor, she insists again and again. Offering help only hurts them. No matter how dire things become in the country as a result of her insistence on austerity, she continues to insist that her policies are necessary, that the country is sick and that she is the doctor giving it the difficult medicine it needs to survive. Even to the end Thatcher can’t see past her own story.

This theme of the myths we tell ourselves and others weaves its way throughout the season. The Queen has her press secretary leak her displeasure with Thatcher, only to then force him to spin the leak as his own when the move blows up in her face. Diana and Charles visit Australia as its Prime Minister is trying to give his country a new story for itself, that of a republic with no need for a royal family. The Australian Prime Minister  watches in awe as Diana’s fairy-tale grace and beauty completely undermines his efforts.

The show’s creators don’t absent themselves from this notion of myth-making. The fifth episode of the season purports to tell the story of Michael Fagan, an unemployed painter who broke into Buckingham Palace not once but twice– the second time ending up in the Queen’s bedroom. As the creators present it, Fagan and the Queen share a remarkable conversation about life in the United Kingdom at the time, one that crystallizes the Queen’s own concerns about Thatcherism.

In fact, that conversation never happened. By Fagan’s account, the Queen ran out of the room as soon as she saw him. Rather than being a sober, thoughtful soul who comes to the Queen because no one else will listen, Fagan says he was high on mushrooms when he broke in. The show’s description of their conversation actually comes from an interview Fagan gave years later, in which he talked about his life at that time and what he wished he could have expressed.

Some have blasted the show for these kinds of convenient fictions, but the fact that this episode is so entirely confected might be the point. Everything you use to fight fantasy holds within itself fairy tales of its own. The IRA can say it’s been forced to fight back, but what we see is its agents murder an old pensioner and his grandchildren. Thatcher can say she refuses to play favorites with any of the nation’s populace, but in reality she not only favors her son over her daughter, she refuses to condemn apartheid in part because it could hurt her son’s business activity in South Africa. While the season  goes a bit easier on the Queen, placing her as truth-teller before others’ fairy tales, when it comes to her children, especially Charles, her role as queen prevents her from seeing them as they are and helping them as they need.

In the end, only one person seems to escape from the house of mirrors in which our fairy tales trap us, or at least to make her peace with it. That is Diana. In the finale, she arrives on a trip by herself to New York City, struggling under the weight of how Charles and his handlers describe her, as selfish and narcissistic. A disaster. But when Diana is brought to meet children abandoned by their parents because they have AIDS, her own anxieties fall away, and she’s able to respond to them with a care that affects everyone who reads and sees the stories about this encounter.  Although she’s now all too aware of the brutal foolishness of her princess fantasies, the power of that story in others still grants Diana the power to help these discarded children be seen again, and seen as human beings. When we met Diana at the start of the season, she was dressed like a magical, fairy-tale creature. Having had every element of that idea stripped away, paradoxically at the end, she has actually become one.

That moment provides a key counterpoint to the season’s overall theme. Yes, each and every one of us has stories that guide us, stories which both give meaning to our lives and yet are only partially true and that hold us back from understanding and seeing one another. To confront this one fundamental fact is essential. It is to open ourselves to greater freedom in how we see and behave in the world, and greater love in how we respond to it.

At the same time, there is no life free of stories. The insistence that one can in the end “put away childish things” is itself just another fable, potentially quite a dangerous one.

And even as they need to be regularly interrogated, the tales we tell ourselves still can do a tremendous amount of good. Diana’s insight in the season finale is the same lesson Pope Francis has been preaching by example for the last seven years. Time and again in public settings he recreates moments from Scripture, spending time with the sick, the imprisoned, the shunned, and the ignored. In doing so, Francis both draws our attention to those people and their needs and calls forth a similar response from us.

Yes, Francis’s actions proclaim, the stories we were taught as children are true. There is a God who sees and loves us all. And even if we’re each just flawed, fragile human beings, in following his example we can make the world better.