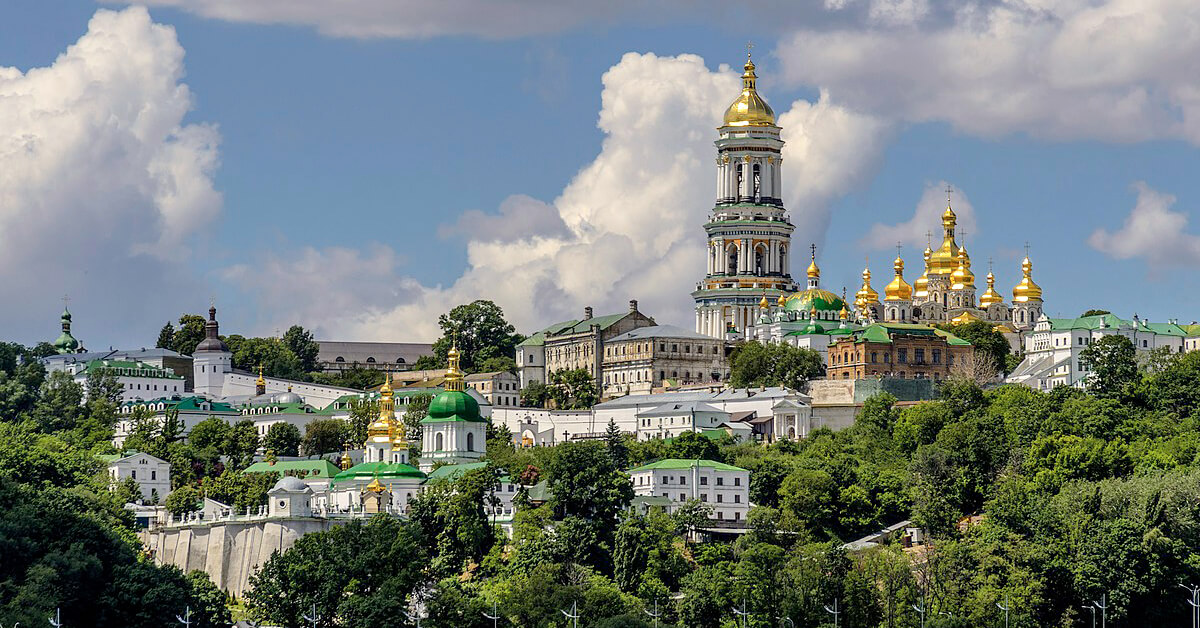 The Kyiv-Pechersk Lavra—also known as the Kyivan Caves Monastery—is the oldest monastic complex of Kyivan Rus, dating to ca. 1050. It was established by a man from Liubech named Anthony. After traveling to a certain “Holy Mount” and then returning to Kyiv, he wandered the land in search of an ideal retreat from the world. Eventually, he found a spot in a cave atop a mount, overlooking the Dnieper River, some distance from the city center. There, Anthony  settled in prayer, and around him developed in time the monastic community of the Kyiv-Pechersk Lavra.

Throughout its long history, the Kyiv-Pechersk Lavra gathered icons, textiles, metalwork, woodwork, relics, books, prints, and many other artifacts. These vibrant collections grew in time through gifts, exchanges, donations, and objects produced in local workshops, demonstrating the piety of patrons, the connections of the monastery across the Christian cultural spheres, as well as the skills of local artists, craftsmen, and scribes. The collections of the Lavra gradually enhanced the significance and holiness of the monastery within Rus, as well as within the broader medieval and modern spheres of Christianity.

The monastery has suffered the ravages of war and political upheaval over the last millennium. But the current Russian invasion—conducted with the blessing of the Russian Orthodox Church —represents perhaps the most serious threat to a complex that has been crucial to the region’s Christian history and legacy.

Objects from the Kyiv-Pechersk Lavra had been in use, on display, or stored in the various buildings of the fortified monastic complex over the centuries. The repositories included the main cathedral of the Dormition, which was first built in the eleventh century (1073) according to Byzantine design and decorative principles. Unfortunately, the cathedral was destroyed in November 1941 during World War II. Construction on the current building began in 1995, and it was consecrated in 2000.

Among the many treasures of the former cathedral was a miracle-working icon of the Dormition of the Virgin, corresponding to the dedication of the church. It supposedly stood above the entrance to the cathedral. The original is now destroyed, but the new church displays a nineteenth-century copy of this dedicatory icon.

Other key buildings in the Kyiv-Pechersk Lavra complex include the Holy Trinity Church. Dating to the first decade of the twelfth century, the edifice became the main church (katholikon) of the monastery after the destruction of the Dormition cathedral. Other churches date to the seventeenth century, including the church of Saint Anne’s Conception (1679), the church of the Nativity (1696), the church of the Resurrection (1696), and All Saints’ church (1696). In addition, a great belfry was constructed between 1731 and 1744. Rising about 315 feet (96 meters) in height, the tower houses a library, a large clock, and three of its original bells.

But perhaps the most noteworthy aspect of the monastic complex is the vast underground network of caves that preserves the tombs of the holy monks and important figures associated with the monastery, including the founder Saint Anthony. In fact, the name of the monastery, “Pechersk” derives from the word for “caves”/“pechery.” This labyrinth of underground passages once offered a retreat from the world for the holy men who lived and prayed at the monastery. Now, it serves as eternal burials and sites of memory.

Today, the caves can be visited, serving as a key site in the spiritual economy and tourism of the region. Each year, visitors and pilgrims make their way through these exceptional holy caves that safeguard some of the most important relics of Christian Rus and Eastern Orthodoxy. These sites offer special and otherworldly experiences that bring one closer to the divine.

The material and textual evidence of the Lavra is preserved in various buildings of the monastic complex, which have been repurposed after the monastery was converted into a museum in 1926. It was then renamed as the Kyiv-Pechersk Historical and Cultural State Reserve (All-Ukrainian Museum Town). In 1990, the Kyiv-Pechersk Lavra was designated as a World Heritage Site by UNESCO.

Within the complex, one can find today the Museum of Historical Treasures of Ukraine, the Museum of Ukrainian Decorative Art, the State Historical Library, the Theater and Film Arts Museum, and the Book and Print History Museum, among others. The museums of the Kyiv-Pechersk Lavra include numerous religious and liturgical objects, as well as manuscripts and printed books dating from the sixteenth to the twentieth century, as well as objects associated with the local icon painting workshops and the printing house. The latter had a profound impact on the cultural development of the Lavra in the seventeenth century. The printing press and printmaking activities at the monastery began in 1616.

The monastery became well-known for its printed books, paper icons, and printed textiles. Woodcuts with religious iconographies were sold in large numbers to pilgrims, thus increasing the revenues of the monastery. Some of the earliest examples of such paper icons date to 1625–29. About 3500 woodblocks, mostly from the seventeenth and eighteenth centuries, are kept in the archives of the monastery today.

Calendars were a popular printed art form created in the Lavra printing house. These included twelve sheets of paper, showing the saints celebrated in each month of the year. The earliest examples executed in the Lavra workshop date to 1629. The printing house at the Kyiv-Pechersk Lavra was so active, successful, and popular that it established connections throughout the Eastern Christian cultural spheres beginning in the seventeenth century.

The complex and diverse collections and archives of the Kyiv-Pechersk Lavra, accumulated over centuries, demonstrate the intense activity, deep spirituality, and wide connections of the monastery within Kyiv, the wider Rus, and the even wider medieval and early modern cultural spheres.

Today, only a pale image of the former rich collections of the Kyiv-Pechersk Lavra survive. And these are further endangered by the current war in Ukraine. During World War II, German forces transferred art among local museums and also removed objects from the region. Hundreds of icons and precious objects of the Lavra were placed in storage, others moved to nearby collections, and some removed to other countries. This shifting of the cultural heritage also resulted in works being stolen or illegally sold.

The lack of documentation from the period poses serious problems to modern scholars trying to piece together the evidence and reconstruct the history and collections of the monastery. Eventually, some of the objects were returned to Kyiv, but only a small portion. Most were restituted to the former Soviet Union and ended up in Russian museums such as the State Tretyakov Gallery in Moscow, while others entered international and private collections.

This was the case with one of the earliest icons of Rus. The thirteenth-century image known as “Our Lady of the Cave” shows the Theotokos (Mother of God) at the center with the Christ Child on her lap against a gold background. To either side of the holy duo stand Saints Anthony and Theodosius—the early founders of the Kyiv-Pechersk Lavra. Theodosius was the third abbot of the monastery, and the community significantly grew under his guidance.

This important early icon of Saints Anthony and Theodosius connected with the Kyiv-Pechersk Lavra is now housed in the State Tretyakov Gallery in Moscow. Its journey away from Kyiv is representative of the dispersed cultural heritage of Kyivan Rus in Russia and other international collections, primarily due to military and cultural conflicts.

This pattern continues amid the ongoing Russian invasion, which is leaving Ukraine, its people, and its cultural heritage once again in the crossfire.

Official website of the Kyiv-Pechersk Lavra: https://lavra.ua/en/. This site includes views of the caves and a substantive video.

Lilienfeld, Fairy von. “The Spirituality of the Early Kievan Caves Monastery.” In Christianity and the Eastern Slavs, vol. 1, Slavic Cultures in the Middle Ages, 69–72. Los Angeles: University of California Press, 1993.