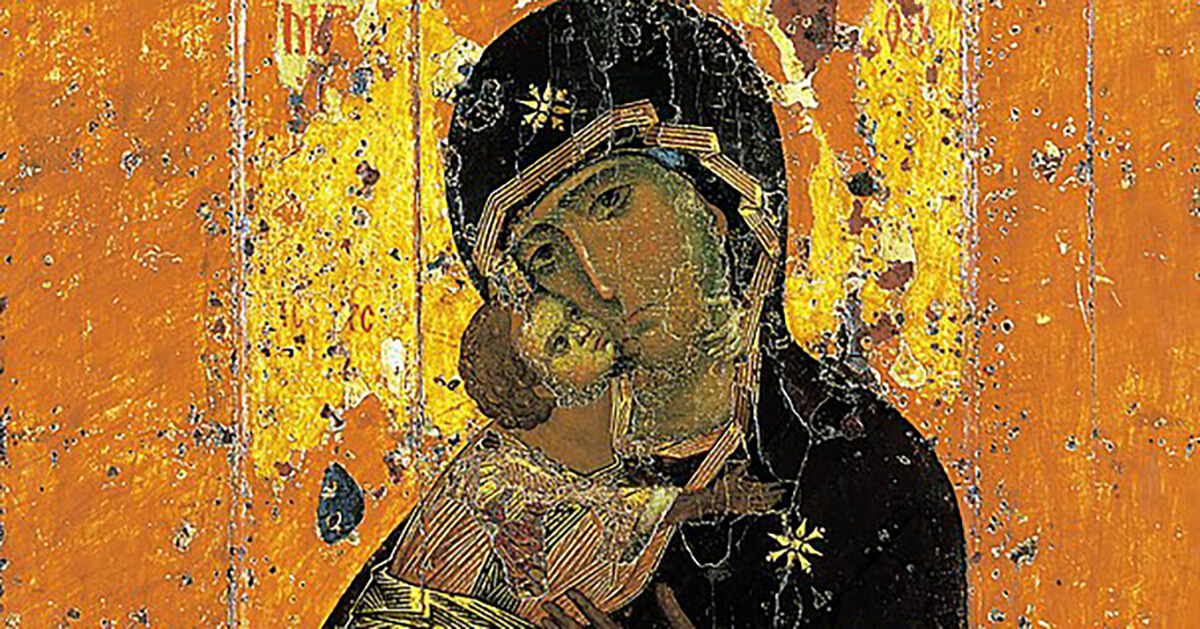 The history and culture of Ukraine—endangered by the continuing war—have long been reframed by the USSR and the Russian Federation in order to promote certain narratives. For much of the twentieth century and in recent decades, there have been ongoing efforts to delegitimize and transform the medieval cultural heritage of the region, which constitutes part of the former territory of Kyivan Rus. This vast kingdom extended over parts of modern Ukraine, Belarus, Russia, and other Eastern European countries in the Middle Ages. Important medieval buildings of Kyivan Rus, as well as smaller portable objects, like the Virgin of Vladimir icon, have changed forms and meanings over time, complicating the historical picture.

In the modern era, the culture of Kyivan Rus, with roots in Byzantine and Western medieval artistic traditions, has been appropriated as part of a Russian visual (and ideological) identity at the expense of other histories. This is evident in architecture—if we consider the transformations of Saint Sophia Cathedral in the historic center of Kyiv—and in icons.

One key example is the so-called Virgin of Vladimir icon. This object is a bilateral icon displaying the Virgin Eleousa (or the Virgin of Tenderness) with the Christ Child on one side, and an image of the Hetoimasia with the nearby instruments of Christ’s Passion on the back. The Hetoimasia offers a symbolic representation of the Second Coming of Christ, often found on icons, monumental art, manuscripts, and other media. The back of the icon was likely painted later on top of an older image of a saintly figure, possibly Saint Nicholas.

The image on the front of the icon, however, is the most poignant. It shows the Christ Child reaching for his mother, touching his cheek to hers while extending his right arm around her mantle. The Virgin gently cradles the child in her arms and bends her head to reach his cheek while looking out to the viewer. Her gaze is both loving and sorrowful, as if anticipating the suffering that was to follow in her son’s death and subsequent resurrection.

Today, the icon measures 106 x 69 cm, but framing elements were added at a later point. The original image in the central composition measures 78 x 55 cm. Its size indicates that it was designed to be displayed inside a church and carried in religious processions. Its technique and iconography suggest a Byzantine origin, and more specifically from a Constantinopolitan workshop.

The icon is supposedly a miracle-working image, having protected Moscow from military attacks during the fourteenth and fifteenth centuries, for example. It is known that on August 25, 1395, the icon of the Virgin of Vladimir was taken to Moscow to protect the city from Timur’s army (r. 1370–1405). A century later in 1480, the icon once again was brought to Moscow to safeguard the city, this time from the attacks of Khan Ahmed (r. 1465–1481). Therefore, in times of need, the Virgin of Vladimir served as a palladium for Moscow, invoking divine protection and assistance from enemy attacks.

The icon arrived in Kyiv probably as a diplomatic gift from Constantinople during the first half of the twelfth century (ca. 1131). In 1155, it was transferred to Suzdal and Vladimir, and then to Moscow in the fourteenth century. This occurred sometime after 1326 when Moscow began to assert its religious and military presence in the region. The Metropolitan See (or seat of the Church), headed by Peter (ca. 1260–1326), was transferred from Vladimir to Moscow at this time. Moreover, the Muscovites led by prince Dmitri Donskoy (r. 1359–1389) emerged successful in a confrontation against the Mongols at the Battle of Kulikovo on September 8, 1380.

The physical movement of the icon between these centers corresponded with the transfer of religious, political, and ideological power, as well as its eventual concentration on the Kremlin in Moscow from the fourteenth century onward.

The importance of the Virgin of Vladimir icon is also indicated through the many copies that survive from medieval and early modern periods. Through the emulating process, the miraculous qualities of the original were transferred to the other hundreds of icons that emulated the prototype. The veneration of the icon was thus widespread through its many copies in different media.

One example is the icon by Andrei Rublev (ca. 1360–ca. 1430), produced around the turn of the fifteenth century (1395–1410). It is considered one of the oldest copies of the Virgin of Vladimir icon. Since circa 1921, it has resided in the Vladimir Museum.

Another example is the mid-eighteenth-century icon known as The Virgin of Vladimir with Twelve Scenes from the Legend of the miracles of the Icon of the Virgin of Vladimir. The main image of the Virgin and Child is surrounded by twelve narrative vignettes, forming a frame around the central holy due. This icon is now preserved in the Fogg Museum at Harvard University. Similar images are scattered in private and museum collections around the world, underscoring the popularity of this icon.

But just as the original icon of the Virgin of Vladimir received other iterations through copies, this work also was transformed through restoration and additions. In the fifteenth century, the icon received a gold oklad (or revetment) for the area around the figures and the frame, consisting of twelve representations of holy feasts. In 1657, the icon also obtained an elaborate riza (embellishments for the figures), which further transformed its appearance. The latter consists of gold designs for the garments of the Virgin and Child, as well as elaborate jewel- and pearl-lined sections decorating the collars and haloes of the figures. The riza also added a crown to the figure of the Virgin, underscoring her role as the queen of heaven. Additional small gold plaques on the side carry the initials of the Virgin and Christ Child. The Virgin of Vladimir icon acquired physical and spiritual value over time, and this is evident in its many restorations and additions through which different individuals left their own marks on the icon.

For medieval regions like Kyivan Rus, the history, art, and culture should be studied through connections, identifying elements of specificity and negotiations in local contexts, as well as transformations over time. These territories developed at the crossroads of traditions, with far-reaching contacts across the medieval world. They should not be dismissed or relegated to the margins of inquiry, as the history and cultural heritage of Eastern Europe have been for much of the twentieth century.

Just like the Virgin of Vladimir icon, other icons from Kyiv and other Rusian centers, like Novgorod, had similar fates, and are preserved today in the State Tretyakov Gallery in Moscow. These are icons of Rusian—not Russian—origin. Yet their layered histories, intimately intertwined with those of Kyivan Rus, have been bypassed in favor of a more monolithic view of history from which Russia emerges as the dominant power.

To avoid such historical distortions, however, different voices and perspectives ought to be considered and brought into the conversation. The textual and visual records should be studied side-by-side, and the afterlives of medieval objects and monuments should be critically examined. Such approaches would help counter modern myths and uncover the diverse and layered dimensions of the past.

Bakatkina, Maria Sergeevna. “‘Hands off That Sacred Image!’ The Vladimir Icon and Its Power.” MA Thesis. University of Virginia, 2017.