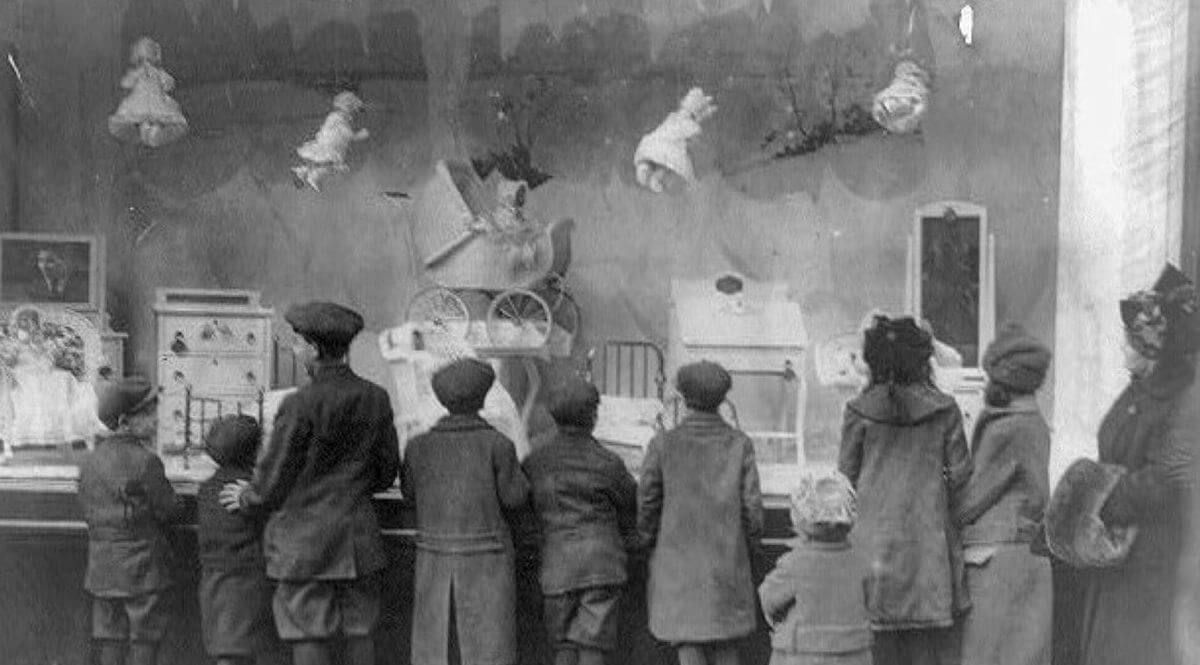 It’s Christmastime in New York. Whether you’re reading this from your dorm room at Rose Hill or from your home in Wichita, Kansas, there are things about the way we celebrate Christmas here that you probably know about: the tree and ice skating at Rockefeller Center; the show at Radio City Music Hall; and the holiday windows along the Fifth Avenue storefronts and at Macy’s.

This is my eighth year living in New York, and I’ve never really thought about where any of these traditions came from. They’re just part of the fabric of life here. Maybe that’s true for you, too.

But it turns out their origins offer some really fascinating stories, stories that touch on matters of faith and solidarity in the face of suffering and racial justice. So, as a little stocking stuffer from me to you, here’s the secret origin of these three great New York Christmas traditions.

The Tree at Rockefeller Center

For as big a deal as the Rockefeller Center Christmas Tree is today—one site calls it “the worldwide symbol of Christmas,” which I feel as if the world’s Christians may have some opinions about—its origins as a tradition are both humble and touching. In 1931, construction started on Rockefeller Center, which was going to be this massive twenty-two-acre complex. It required the demolition of over 200 buildings.

When it came to that first Christmas, a bunch of the construction workers collected their money and bought a twenty-foot balsam fir tree, which they placed in the midst of the demolition, and they decorated it with garlands and strings of cranberries made by their families. It would probably remind you more of Charlie Brown’s Christmas tree than what you’ll find today at Rockefeller Center, a eighty-two-foot high Norway spruce covered in 50,000 LED lights. But these men and their families did this during the height of the Depression. Money was very tight, the future scary. That tree might look as if it’s covered in silly string, but it was a quiet expression of hope and solidarity.

Two years later, the tree became an annual tradition, and the first tree lighting took place. Three years after that, the ice rink was installed.

I don’t know if you’ve ever taken a good look at the gold sculpture that stands above the rink. Created by artist Paul Manship in 1934, it’s actually a rendition of Prometheus stealing fire from the gods to bring to humanity. There’s an inscription that reads: “Prometheus, teacher in every art, brought the fire that hath proved to mortals a means to mighty ends.” It’s one of dozens of works of art around Rockefeller Center, all of which were meant to represent aspects of the theme “The March of Civilization.” Once again, context is everything. In this period of often unrelenting despair, Prometheus and the other art at Rockefeller Center offered viewers the reminder that the horrors of the present would not last forever. The progress of humanity cannot not be held down or held back.

Radio City Music Hall is part of the Rockefeller Center complex. It opened for business two days after Christmas in 1932. Its first show was intended to be an extravaganza, the kind of thing to spit in the eye of the Great Depression. In reality, it was a total disaster. The program went too long, and the space was too big for their microphones to sufficiently amplify the sound. After a year of similar misadventures, Radio City was turned into a movie theater and it became RKO Pictures’ big splashy place to debut films. (Fun fact: the Hall actually gets its name from its first tenant, Radio Corporation of America (RCA), which owned RKO.)

Ever since its very first Christmas as a movie theater in 1933, the Music Hall has put on its Radio City Christmas Spectacular featuring the Rockettes. (That first year it was accompanied by two movies, including Flying Down to Rio, the first pairing of cinematic legends, Fred Estaire and Ginger Rogers.) The original stage show was actually designed by film and stage director Vincente Minelli, aka Liza’s dad.  Believe it or not, the show’s biggest numbers have been in it since the very beginning. The Rockettes’ “Parade of the Wooden Soldiers” and “The Living Nativity” were part of the original stage production. In early November, Cardinal Timothy Dolan traveled to Radio City to bless the animals in the show.  “Animals,” he said, “the greatest gift, were right there at Jesus’ birth when nobody else was.” (He also mentioned “Once a camel spit on me and we had to have my clothes cleaned.”)

It’s worth noting that the Rockettes themselves precede the Music Hall. Choreographer Russell Markert founded the group in 1925 as a troupe of precision dancers to match those he had seen in London. Originally called the “Missouri Rockets,” the group was a touring company. When they performed in New York they were an immediate hit. S. L. “Roxy” Rothafel, the owner of the theater where they performed, begged Markert to hire a second set of sixteen dancers to perform for him in New York full time. He named them his “Roxyettes” (I know, ugh), and he moved them to Radio City in 1932, where they’ve been ever since.

A little Ram trivia: before the shows begin in early November, the Rockettes do six weeks of rehearsal across the street from Fordham’s Lincoln Center in the basement of the Church of St. Paul the Apostle. So if you walk by the church next October and hear Christmas music blasting, that’s what’s going on!

Take a walk down Fifth Avenue or past Macy’s right now and you’ll find windows decorated with scenes from Christmas-themed stories brought to life. If you’re not from New York, perhaps they do that in stores where you’re from as well. (I know in my hometown of Chicago Marshall Field’s was always known for its fantastic Christmas windows.)

Well, according to Macy’s, this tradition began with them. Owner R. H. Macy was always looking for ways to draw people into his store, which at the time was located not on Thirty-Fourth Street but was a cluster of stores on Sixth Avenue between Thirteenth and Fourteenth Street. (In the late nineteenth century, the quadrilateral area between Fourteenth and Twenty-Third Street and between Sixth Avenue and Broadway was filled with fancy stores; meanwhile, Fifth Avenue didn’t have a single commercial building until 1896.) The invention of a machine ability to create large plate glass allowed Macy and others to create elaborate window displays for their stores, which he then lit up, enabling his stores to advertise their products all night long.

R.H. Macy had been doing holiday-specific decorations in his windows since 1864. (Macy’s was also the first department store to hire a Santa for the holiday season and the first New York department store to stay open until midnight on Christmas Eve.) In 1874, he came up with the idea of putting porcelain dolls in his windows, set in scenes from Harriet Beecher Stowe’s Uncle Tom’s Cabin. And that’s where the tradition began.

You might wonder, why feature scenes from a book about the horrors of slavery in Christmas windows? It’s a great question. While I have yet to find a definitive answer, I think it could go back to religious convictions. Macy was raised Quaker, and the Quakers were the first major religious movement in the United States to have condemned slavery.

Christian faith is also a prominent theme of Stowe’s book. Tom holds true to his faith despite the brutality he faces and he  inspires other slaves through it. In the end he functions as a Christ figure, sacrificing his life so that his fellow slaves can escape.

Perhaps the windows were an expression of Macy’s own faith, or a way of connecting the birth of Christ explicitly to the cause of emancipation. Whatever the reasons, his choice to present that story at Christmas is a potent challenge to those today who argue that racial justice movements are “simply” political or have no place in a life of faith.

At its core, the Christmas story is a story of liberation. But as we live it, it’s also a story about the power of community. Just as the construction workers at Rockefeller Center picked up one another’s spirits by decorating a Christmas tree; the Rockettes have brought holiday delight to so many with their incredible dancing; or R. H. Macy put a spotlight on the lives and experiences of Black people by placing a story of slaves at the center of his first Christmas window display, we, too, have the power in this season to lift one another’s hearts, to be a source of cheer, and to raise up those who others demean or mistreat.  Christmas is not just what God did 2,000 years ago. It lives on in how we choose to live it out. It’s what we make of it today.