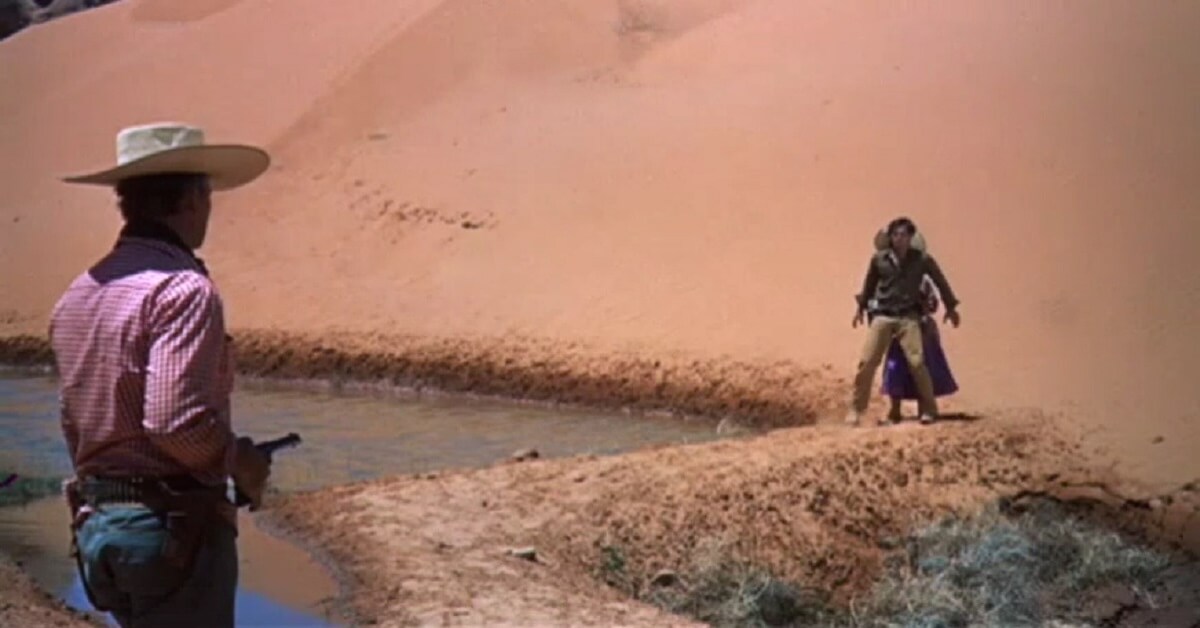 The closest thing to an imprimatur in American literature is publication by the stately Library of America (LOA) series.

And the LOA, home to Ralph Waldo Emerson, Henry James and F. Scott Fitzgerald, buffed up the profile of pulp Westerns this spring by issuing The Western: Four Classic Novels of the 1940s & 50s. This volume includes Shane, The Ox-Bow Incident, and The Searchers. All these novels are better known as Hollywood films that lived a second life before big audiences as staples of American broadcast television long before cable and streaming.

But only The Searchers, a film about two Texas settlers relentlessly and bloodily seeking a young niece kidnapped by Comanche fighters during a murderous attack, can still prompt charges of racism from famous names such as New York film director Spike Lee.

While promoting his recent film Da 5 Bloods, Lee lumped The Searchers — which was directed by John Ford, starred John Wayne, and was released in the Vista Vision format in 1956 — with lesser lights of the Western genre, which was immensely popular on television and in movie theaters and paperback racks in the post-war United States.

I think Lee might have it wrong: he only sees the film–deemed the greatest western movie ever by the American Film Institute–as about its setting and cultural context. However, its themes and magnificent closing shot are about the terrible costs of hatred and the duties we all hold to wider communities.

I suspect that Lee, like me, a Brooklyn-bred child of  the 1950s, who most likely knows his Ford westerns from “Million Dollar Movie” screenings on New York’s WOR-TV Channel 9, does not see Herman Melville’s Moby Dick as a story about the ocean and 19th-century commercial fishing. John Huston’s film version of the classic American novel was released the same year as The Searchers.

The Library of America’s new edition of The Searchers prompted me to read Alan LeMay’s original novel, and it was both a pleasant surprise, and underscored the themes that the movie version recast. Ford tilted the screenplay for The Searchers away from the novel’s main character, Martin Pawley, a callow young man as aggrieved by the kidnapping as Wayne’s Ethan Edwards, and also alters Pawley’s backstory to include partial Native American heritage.

That change initially makes Pawley an object of Wayne’s racial scorn as the ordeal to find the captured girl starts, but, more importantly, it places at center stage the Wayne character’s distorting racial hatred. Wayne’s portrayal of Edwards is more pained and embittered than the character in the novel. As the film critic Roger Ebert wrote: “I think Ford was trying, imperfectly, even nervously, to depict racism that justified genocide.”

An even more telling difference between novel and film is the ending.

In the novel, Le May killed off the Ethan Edwards (Wayne) character, and Pawley rescues Edwards’s niece Debbie Edwards. This leaves readers in the dark about whether or not the Wayne character would have murdered his kidnapped niece, as he repeatedly pledged to do in the film. He incarnates a white settler’s disgust at a white girl being impregnated by a Native American and he thought the kidnapped girl would be better off dead.

In the film adaptation, Ford gives us an unexpected answer to Wayne’s racist character, shown with one of cinema’s most famous and affecting shots. Wayne returns the girl unharmed to other joyous settlers, but Ford condemns Wayne’s Ethan Edwards to isolation. He remains alone on a front porch before turning and walking into a barren desert.  Ethan Edwards has no place to go. It is part of the price for his racial hatred.

For me, that shot proves to be a reliable weeper, evoking the expulsion from Eden of Adam and Eve. I am unsure whether Ford had that Bible story in mind in 1956. The son of Irish immigrants, Ford made something in the order of an astounding 140 films and seldom used explicitly religious themes. The one exception being an adaption of Graham Greene’s The Power and the Glory, a tale of a failed, drunken priest on the run in Mexico.

But Ford repeatedly visited the topical, often religious themes of people sacrificing themselves for a bigger purpose or making choices informed by love for a broader community. This is why The Searchers and other Ford films might merit viewing, or re-viewing, today. Americans by the millions are confronting our own Original Sin of racism, and deciding whether we, too, will walk away in self-imposed exile, or search for a different ending to our national narrative.

Michael Connor is a writer, editor, a former correspondent for Reuters News.