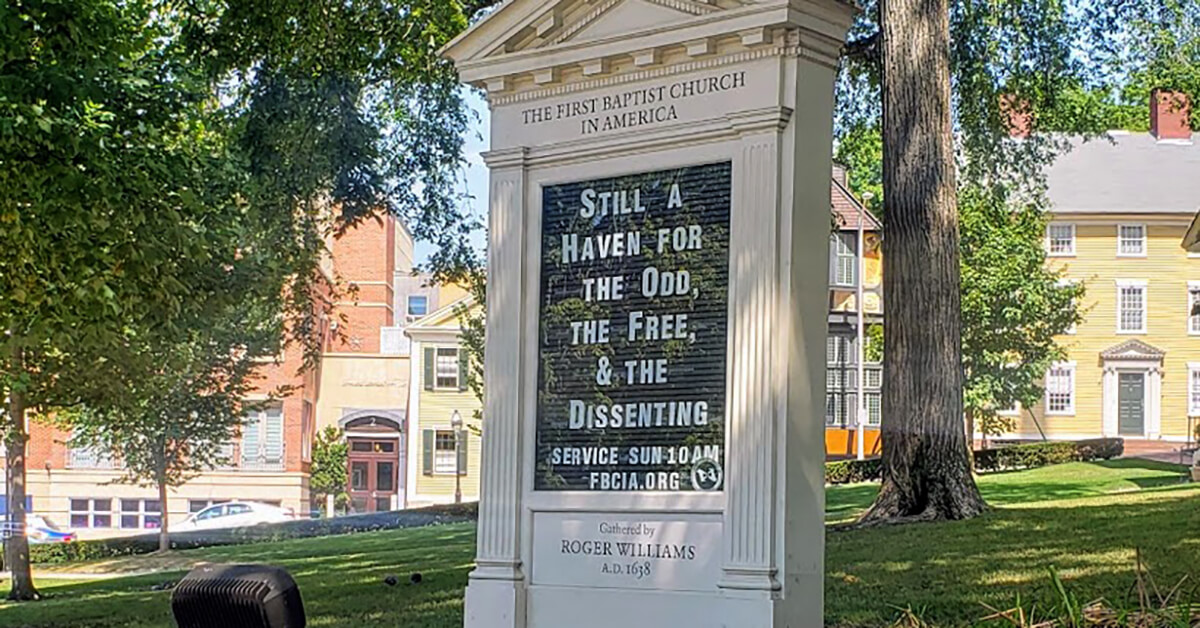 In The Case of Charles Dexter Ward, a novel unpublished in his own lifetime, cult author H. P. Lovecraft described his native city of Providence as a “haven of the odd, the free, and the dissenting.” Over the course of a long weekend this past August, the historic First Baptist Church posted a paraphrase of this quote outside its meeting house, welcoming largely black-clad visitors to the opening ceremony of Necronomicon Providence, a convention commemorating the writer and artists influenced by his literary output. This “international festival of weird fiction, art, and academia,” and the city itself lived up to Lovecraft’s characterization.

Attendees filled the streets of downtown Providence (Downcity to the locals). They explored the nearby and picturesque neighborhood of College Hill to experience sites and buildings figuring prominently in Lovecraft’s biography and fiction. They nestled in darkened theaters to watch films inspired by his work. They sat in hotel conference rooms to listen to discussions on his life and legacy. They mingled with fellow readers and researchers at block parties and rooftop galas to share their passion for this imaginative subculture.

I was honored to moderate a panel on Lovecraft and his decades-long friendship with activist, writer, and curator, James F. Morton. For the past several years, I have been writing a biography of Lovecraft and New York City. He lived in Brooklyn between 1924 and 1926, and his relationship with Morton blossomed during that period. This panel was something of a soft unveiling of my project. (You can read a preview in Gotham.) Speaking with an in-person audience for the first time since the beginning of the pandemic was equally thrilling, nerve-inducing, and fun.

Like many creative and historic figures, Lovecraft was a complicated and contradictory person. In recent years, his deep-rooted and unwavering racism and bigotry have drawn deserved critical attention. As a biographical subject, Lovecraft is flawed, curious, troubling, and fascinating—that is, all too human. However, his unique medley of the science-fiction and horror genres ensures that his position in the literary pantheon remains secure and his dark cosmology of alien gods quietly, yet widely, impacts popular and high culture. His influence can be heard in the music of trend-setting heavy metal band Metallica, seen in the films of Academy Award-winning director Guillermo del Toro, and read in the novels of MacArthur Fellow N. K. Jemisin. This vexing distinction between Lovecraft the individual and Lovecraft the artist informed many panels at NecronomiCon, and presenting scholars and writers attempted to honestly address it.

Shared secular rituals and communion shaped the entire conference. Its final day even began with a Cthulhu prayer breakfast. A staunch materialist and atheist, Lovecraft likely would have chuckled over such a phenomenon. (For the uninitiated, Cthulhu is a powerful extraterrestrial entity long dormant in the South Pacific Ocean and who will one day awake and herald the end of all human civilization. As we are buffeted by a constant barrage of apocalyptic news, this return does seem imminent.)

Lovecraft’s unsettling racial beliefs do not dampen the enthusiasm for his work and its adaptations in various media. The conference attracted guests of different backgrounds, colors, and gender identities from across the United States and the globe—all excited to learn more about this Providence author and interact with other people who shared their own fascination with him. These same individuals arguably represented the summation of Lovecraft’s demographic and cultural fears: he did not write his fiction for them and, in fact, he partially offered it as a warning of how America would degrade when populated by diverse and mixed ethnicities, races, cultures, and religions. This appropriation testifies to the power and transcendence of Lovecraft’s better stories and the unpredictable and sometimes inexplicable nature of artistic identification and ownership.

During this one August weekend in Providence, the “odd,” “free,” and “dissenting” found themselves belonging to a rich and supportive subculture with its own symbols, language, and history. Wearing a shirt with a graphic from an early German expressionist horror film might represent cineastic credibility. Dropping the name of an monstrous creature found in a fictional hieroglyphic might operate as a watchword. Asking a question about an obscure, yet revealing correspondence between Black American man of letters William Stanley Braithwaite and Lovecraft himself might reveal an appreciation of surprising narratives still underexplored.

NecronomiCon promoted the place of Lovecraft and Providence in the American and world cultural sphere. It provided a welcome jolt to the local economy by encouraging attendees to explore the city and sample its restaurants and businesses. It invited readers and fans of every persuasion into a welcoming community.

Amid an increasingly unmoored society and weakened polity, NecronomiCon’s nourishment of this colorful and strange subculture might stand as its most important and moving contribution. Lovecraft’s masterpieces communicate his grim surety of the absolute meaninglessness of humankind in relation to the universe. Ironically, this celebration of those same stories hinted at a more hopeful alternative.