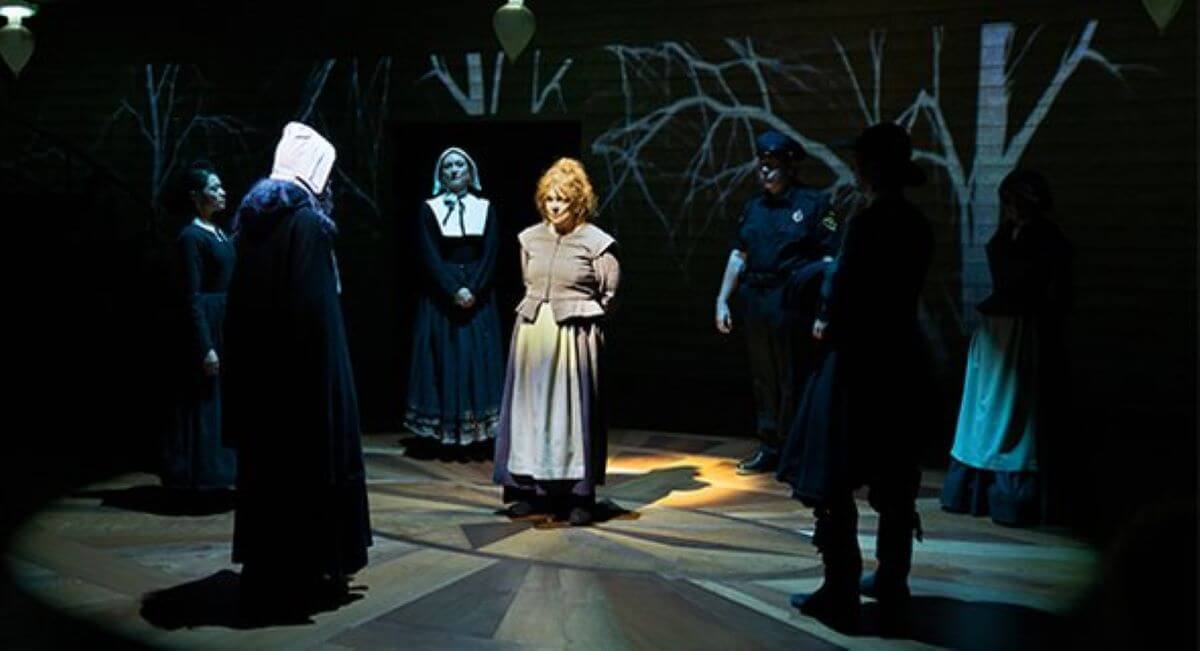 If you graduated from high school sometime in the last sixty years, you probably had to read The Crucible, or saw it produced at your high school. Playwright Arthur Miller penned it in 1953 in response to his own experience of being dragged into Senator Joseph McCarthy’s insane hunt for communists. But I think most of us remember it more as a history lesson. Miller’s play chronicles what happened in Salem in 1692.

Either way, we’re meant to see it as a story about the way that a group of people can wield paranoia to punish their enemies and exert social control. Whereas the agent of villainy in the real-world of the 1950s was a government official with a lot of power and influence, in The Crucible it is a group of mostly teenage girls, the leader of whom was having an affair with the play’s main character, John Proctor, while she was working in his home. Popular study guide Spark Notes calls Abigail Williams “clearly the villain of the play.” After being shunned for rumors of her affair with Proctor, “she tells lies, manipulates her friends and the entire town, and eventually sends nineteen innocent people [including Proctor’s wife] to their deaths.”

But there are crucial pieces of information that Miller altered from the historical record, a fact that led Sarah Ruhl to write her new play, Becky Nurse of Salem, which just closed at Lincoln Center. In the real story, John Proctor is not thirty-five, as he’s portrayed in Miller’s play, but sixty. And Abigail Williams, the girl who Miller imagines lusting after Proctor, was not seventeen. She was eleven. Also, they never even met in real life. (Meanwhile, Miller was a thirty-eight-year-old married man in love with the twenty-four-year-old Marilyn Monroe at the time he was writing his play.)

In Ruhl’s play, Becky Nurse reveals this information partway through a hilariously plain-spoken opening monologue, in which we are imagined as a high school tour group she is leading through the Salem Witch Museum. (She follows it up with something like “What the f—?”) The play doesn’t dwell on this fact, or on Becky’s note about how the modern town is built on the graves of those innocent murdered women, including her own ancestor, Rebecca Nurse.

But once those comments are made, they become part of the ground that we in the audience, too, are treading here. After a very funny first act in which Becky engages an actual witch to help her with her problems, we find ourselves in a much more serious second act story about Becky hitting bottom. We learn that she is a high-functioning opioid addict. After being put in jail and awaiting trial for breaking into the museum, she begins having intense hallucinations of herself as her ancestor on trial for her life. And as much as Becky has difficult experiences of her own to confront, at a deeper level her struggle is to confront the trauma of being a woman.

She and Rebecca Nurse share the same horror: that of existing in a reality in which women are judged without being seen; their brutal deaths are understood only as an object of tourist scavenger hunts or as inspiration for Disney movies; and children are taught to treat as fact stories of girls and women told by a middle-aged man who paints the male character as the real subject (and victim) of the story.

Historical trauma in Ruhl’s hands is not some slippery piece of psychobabble, but a sharp line that goes very clearly from today back to then, and a hell of a lot further. (Tell me that the story of Adam and Eve doesn’t match up exactly with this one. Eve is a woman who approached creation with an openness, curiosity, and wonder that the man—who notably spent his time defining everything—couldn’t handle. And for her “crime” she was saddled with the blame for not only human sin and suffering but death. And we still tell children this story.) For Becky, it is only in forcing herself to stop running, experience the pain of that greater trauma, and confront the truth of her reality, that she can finally be free.

At the end of the play, Becky herself is put on trial, both for breaking into the museum and trying to smuggle drugs into the prison, a crime with serious time attached to it. She confesses to everything, and desires no pity from the man who sits in judgment over her. “I just ask,” she says, “that you imagine me to be real.”

Although the Salem witch trials happened over three hundred years ago, we continue to be fascinated by them. There are no doubt many reasons for that. But I wonder at the conjunction of the persecution of those women—two hundred in Salem were accused by the end of the trials—and the Christian faith of their nascent American community. All these years later, have we found a way to unwind the objectification or fear of women from our faith, or the ethos of our country? Or could it be that we continue to return to the trials precisely because we haven’t, because even in retelling the stories of the egregious crimes done to them we actively resist their reality, turning them into metaphors and justifications for other things?

No matter how deep we try to bury them, those women continue to cry out from their graves in Salem, insisting that they are real and that they be heard.