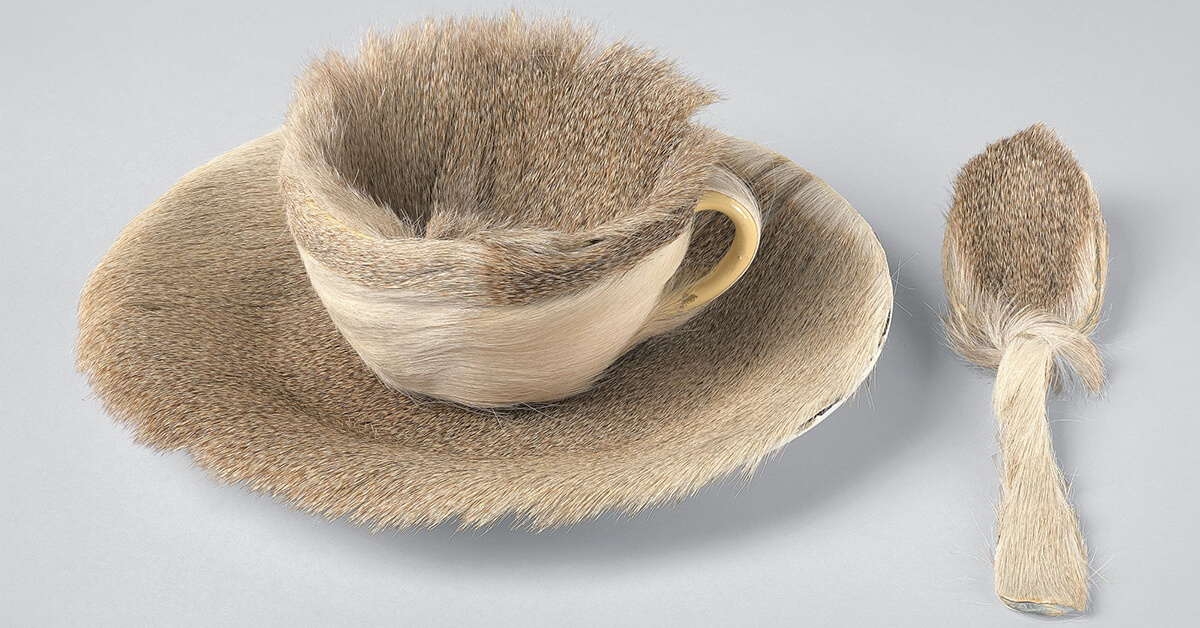 I love to hit an art museum or two during the holiday season. This year I’ve been especially interested in the Meret Oppenheim retrospective exhibit at the Museum of Modern Art. A twentieth-century artist from Switzerland, Oppenheim moved to Paris after high school in 1931 and became part of the Surrealist art movement. She might be best known for a piece she created in 1936 known as Object, which consists of a cup, saucer, and spoon covered in fur.

Apparently while she was having coffee one day with Pablo Picasso (you know, like you do), he complimented her fur bracelets, noting you could cover just about anything in fur. And she thought, “Challenge accepted.”

Having heard so much about Object, I definitely wanted to see it. But at the exhibit, I was surprised to discover that I found the piece so unsettling that I could barely look at it. In fact, just in writing this right now, I can feel my stomach starting to do backflips again. I can’t explain it. The fur on a cup just seemed absolutely repellent to me. And to make things worse, rather than having the fur be sheer and form-fitting, so that I could perhaps just focus on its shape as a cup, Oppenheim “tufts” the material so that the furriness of it is unavoidable.

The exhibit, simply called My Exhibition, includes many different kinds of pieces, from evocative landscapes like Castle by the Sea to dark, fairytale-esque paintings with titles like Corpse in a Boat or Three Murderers in the Woods. There’s a hilarious piece Oppenheim did as a teenager to ridicule her math lessons called Schoolgirl’s Notebook which consists of a typical “solve for x”-type math equation next to an outline of a rabbit. Then below it, she offers the solution:  “x=” the now-drawn-in rabbit. I only wish I had been that clever in school.

Then there’s Stone Woman, a small painting of a group of stones arranged to look like a woman lying on the beach. The figure has such unexpected beauty. The elegant curve of her body reminds me of a ballerina taking a rest on a sea shore.

But the longer I looked at the figure, the more I found it somehow resisting my interpretation. As much as I want this to be an abstract painting of a graceful woman, the collection of stones of which she is made never stops being a collection of stones. Looking closer, I also discovered that her legs, which stretch into the sea, are not stone at all, but actual human legs. Again, I am unsettled. What am I looking at here?

Over and over in the exhibit, I found myself faced with variations on this experience of something essential being ruptured. There’s Squirrel, a sort of sister piece to Object which consists of a small beer stein given a big bushy (nasty) squirrel’s tail. Or there’s Octopus’s Garden, an undersea-themed collage filled with gorgeous blues and greens framing some lovely white coral. But then looking closer amidst the coral are peacock feathers. And somehow placed in this scene where they don’t belong, those feathers undermine the setting. They’re like a conscious error that Oppenheim has made to keep us from simply savoring this otherwise inviting undersea scene.

Other than Object, for me the most traumatic piece of all is Octavia, a six-ish-foot piece set alone in the exhibit which has the look of a standing child. The length of her body has been formed from two wood saws, one which still sits on the sculpture, the other which has been removed. Her eye peers out of the absent handle, and she’s got her tongue stuck out.

Except when you step closer you discover that isn’t her tongue, it’s a finger. Once again everything is suddenly turned upside down in the most viscerally horrifying of ways. I try to dissociate myself from those feelings by offering an interpretation. This is a potent mythological representation of the process of transformation. We all go through periods of our life in which we shed an old skin and emerge as someone new. And yet here it’s more like that future person is trapped, or worse has been swallowed.

Now reading this you might say to yourself: why put yourself through this? The Museum of Modern Art has many exhibits (including one right now on video game art with games you can play). If you got sick to your stomach looking at a hairy teacup, why not tap out and go play Myst?

But for me, going to an art exhibit, even when it ends up super creepy, is like good prayer. When we’re kids we’re all taught prayer is this thing that you do, these words that you say, these intentions that you ask for. But as an adult I’ve rarely found that form of prayer to be satisfying. I certainly do come to God with needs or desires, but listening to myself rattle them off almost never makes me feel any better. Honestly, it’s too similar to the fretting I’m doing all day anyway.

Prayer is meant to put us in contact with God. It’s about making a connection and being in a relationship. And the only way I’ve found that I can do that is by surrendering my own agenda. When I pray I try to sit quietly, breathe, and just be present to myself and the world around me. Sometimes my brain continues to go a mile a minute, or I am bored silly. Sometimes the quiet is really nourishing. And sometimes unexpectedly I realize something.

At an art exhibit, I find myself doing the same things. I try not to “figure the art out” or even get through all the pieces. I just want to feel something. To make contact. To be affected. So when I find a piece that interests me, I just try to stand there, let go, and see what happens.

Oppenheim’s work might have left me queasy, but in a way that’s thrilling. How did she do that? Why is a beer stein with a squirrel’s tail disgusting? And what, if anything, did it all mean?

By the time I was coming of age in the late 1980s, Surrealism had been reduced to posters of melted clocks or endless stairways to put in our dorm rooms. Seeing Oppenheim’s work is a revelation of the drive and power of that artistic movement. Surrealists wanted to radically undermine our sense of stability. Much like that crazy kid from Nazareth whose birthday we’re all going to be celebrating this month, they broke the rules in order to reveal those rules’ existence to us. And at least in some cases, they did so with the hope that the experience would enable us to see our lives more clearly and make better choices. “Freedom is not given to you,” Oppenheim famously said. “You have to take it.”

Maybe I go to art museums during the holidays because in a sense they are like the experience of Advent and Christmas. We wait. We are surprised. And occasionally we receive unexpected gifts.