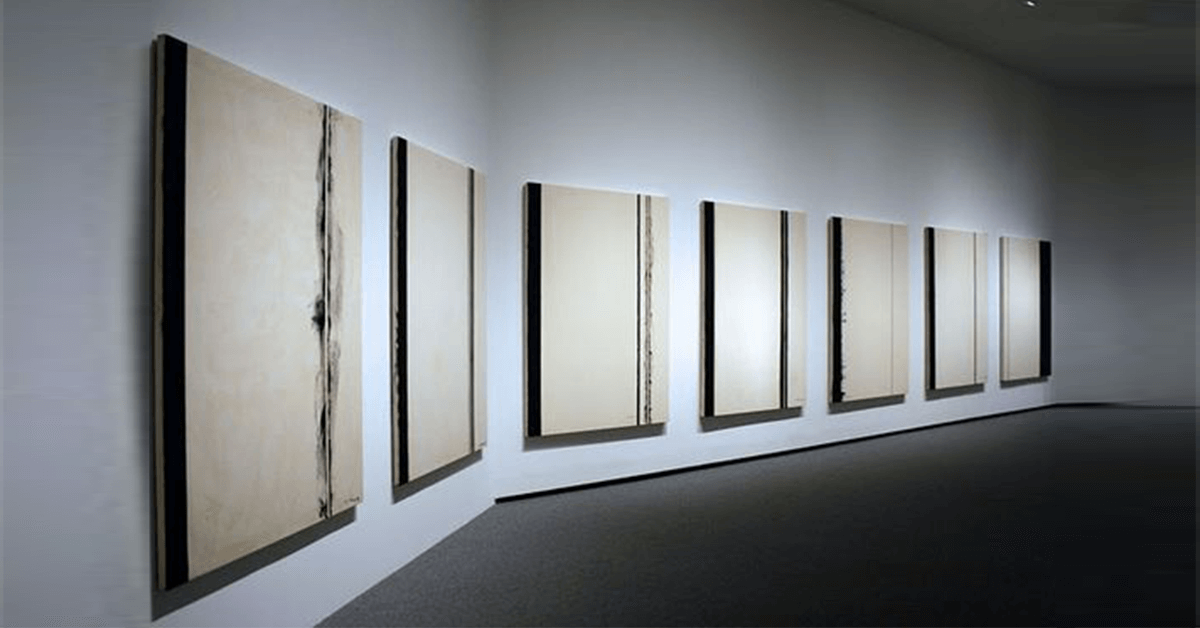 In a large white room, high atop the tower of the National Gallery of Art in Washington D.C., sits a solemn grouping of  fourteen paintings—Barnett Newman’s The Stations of the Cross / Lema Sabachthani (1958-1966). An abstract expressionist, Newman’s stations are simple and straightforward: black and/or white paint on raw canvas, five by six-and-a-half feet tall. They make use of the artist’s signature “zips,” or  vertical lines often created with masking tape. His zips are the kind of trick that make some viewers roll their eyes at modern art, while others—myself included—marvel at the smallest gestures and movements of the artist’s hand recorded in these flat lines.

These paintings are fundamental. They focus on foundations. Abstract Expressionism was in part about stripping painting down to its irreducible qualities. For the modernist painter, flatness is good: something to strive for. There is no illusion, no trickery. The painting is simply a painting.

But the paintings are fundamental in another sense. They focus on the core of the human condition—suffering. Abstract Expressionism took form in the years following World War II. The question of how to respond to human suffering on a scale not seen before—two worldwide wars, the Holocaust, the dropping of atomic bombs—was met with an impulse to paint abstractly, without representation. How do you capture the unrepresentability of suffering?

In a 1966 conversation with Thomas Hess at the Guggenheim, Barnett Newman explained it this way:  “[W]hat I’m saying is that my painting is physical, and what I’m saying also is that my painting is metaphysical.” That Newman is a Jew interpreting the quintessential Christian motif is intriguing itself; an outsider to a tradition can often perceive the fundamentals of that tradition more clearly than insiders. In naming his series “The Stations of the Cross,” Newman positions these paintings at the climax of the dominant narrative in the West. In the catalog accompanying the show at the Guggenheim, the artist describes Jesus’s cry on the Cross, “Lema Sabachthani?”, as the question that has no answer, the original question. It is the lament of the dying Jesus, in Aramaic, quoting Psalm 22: “My God, My God, why have You forsaken Me?”

In the original exhibition catalog, Newman writes: “Lema? To what purpose — is the unanswerable question of human suffering.”

As winter turned to spring last year, I devised a plan to make a repeated pilgrimage to these paintings throughout Lent. I missed the compulsory Friday afternoon Stations of the Cross from my Catholic school upbringing and had been looking for spiritual practices I could connect to as an adult. As an art teacher, and artist, and writer, and student of art history, I figured I would find some kind of solace in this Lenten practice. Much like the devotional stations in the Catholic Church, Newman’s stations require a procession. The participant stops and ponders and looks around before moving, rinsing, and repeating. They do this while confronting their own mortality and the inevitability of death. The dark, heavy thoughts we save for gloomy days in the middle of March.

Of course, as the saying goes the best laid plans often go awry and last year, the gloomy days in the middle of March had a plan of their own. At that time, confronting our own mortality was quickly no longer saved for a church or chapel or an I. M. Pei designed art gallery, but instead to be considered all the time.

We started to suffer too, in real, tangible ways. We missed birthdays and graduations, vacations and time  together. We reimagined our relationships to the workplace and home—obliterating the clean zips that used to exist between the two.

As the weather grew cooler again, my worst nightmares from the early days of the pandemic became realized. My school would not allow me to travel home to New Jersey for Thanksgiving; it wouldn’t be fair for our students who were just now getting used to a hybrid model of learning after months behind a computer screen. It stung, but mandatory travel quarantines would have shut down the wobbly structure we were building. The decision was smart and sensible; that became obvious the day after Thanksgiving when the sniffles I had heard on the phone developed into more serious symptoms. My maternal grandfather was brought to the hospital. Within a week my mom called, exhausted and barely coherent fighting the virus herself, to say he had passed away.

He was ninety-three, and even without Covid-19 his mortality was imminent. It is a dark irony that a man who grew up in a funeral home, whose father was an undertaker, couldn’t have a funeral himself.

When my father’s mother passed away some years ago, we boarded a plane and landed in the southwest of Ireland within forty-eight  hours. For hours on end, a constant stream of people walked through the narrow hallway of her house, up the stairs, and into the front bedroom to pay respect to her body, her life, and her soul. They sang songs, shared memories, and said prayers. Hundreds of people showed up, in a village of just about two thousand.

There is a clan-like mentality with how the Irish mourn. They grieve in community. That tradition carried itself through the diaspora. Growing up, I watched my Irish-American grandfather hold it up countless times. He had a strong presence at a party and shined brightest at wakes and repasts. Within a few minutes, he’d be up at the front eulogizing the dead. No one would really get a chance to eulogize him.

Suffering this year has been unique in that we can’t cope in community. We don’t have big wakes or funerals to go to. I couldn’t be with my family at that time—there was a real risk of contagion. Given the circumstances, it is hard to personalize the abstract loss our communities are going through. Over thousands of years we developed ways to process suffering or at least pretend to make sense of it. But with the unique reality of this pandemic, we can’t use them.

We are grieving the loss of mourning. It brings us back to that core question—Lema Sabachthani? Why, God? For what purpose?

After a year without art, I long for the day that I can sit with Newman’s paintings. And wallow in that cry. And hope that something might just reveal itself to me in the negative space carved out by a piece of masking tape zipped away from the canvas.