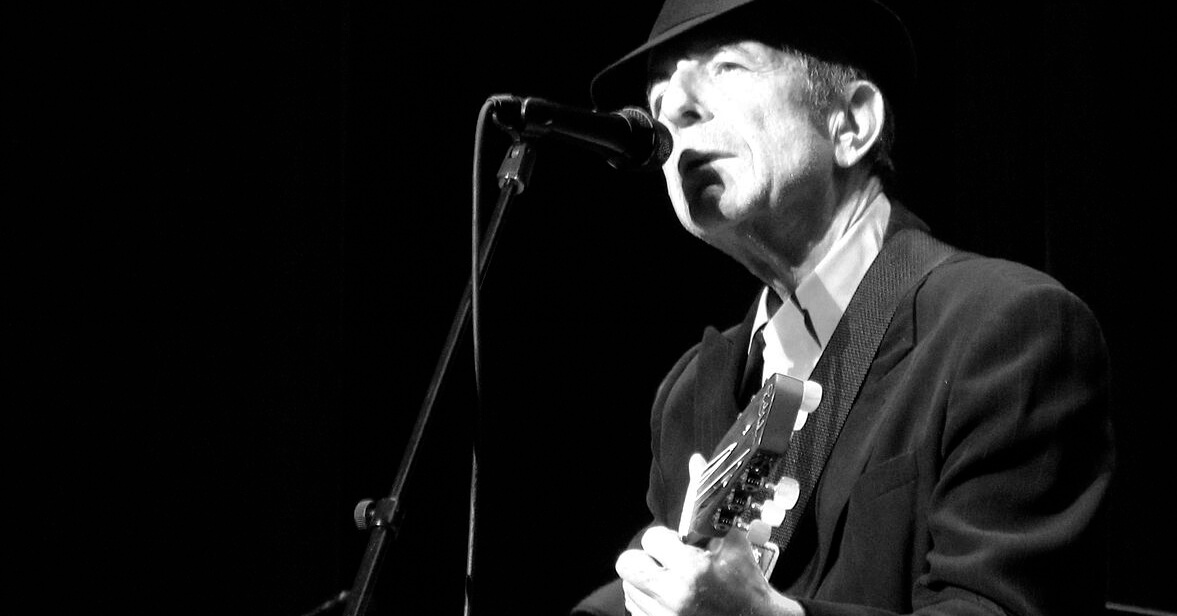 The trouble with our approaches to current ills, from political to pandemic, is that they’re too thin. They don’t get at the foundations. I’m going to propose one place to go for a deeper look: the soothsayer, poet, and musician, Leonard Cohen, who passed away five years ago last November. This may be an unorthodox proposal, but that is why it might have real impact. Art, non-propositional and sensual, circumvents our well-defended political categories and so creates an opening for something we resist or ignore.

Through his music, Cohen gave voice to a worldview — an understanding of how the universe works — and of the consequences of violating its foundational structure. In short, Leonard Cohen explained how we got to the loss, loneliness, poverty, and violence we see around us. And that explanation is grounded in a theological vision.

Cohen’s theistic beliefs were Jewish. He was also a student of Buddhism and the Christian scriptures or what Cohen, as a Jew, would call The Second Testament. “As a Jew,” Babette Babich, who teaches philosophy at Fordham University, notes, “Cohen reminds us to feel for Christ, not to be a Christian necessarily but to get the point about Christ.” Cohen “got the point” — Christ’s lesson of loving and giving for the sake of others — but he found it hard to sustain. In exposing this flaw of his, he illuminates our own.

Cohen understood that we live in a relational universe and are covenantal creatures. We become who we uniquely are through our relationships with God and with each other — importantly for Cohen, with women. Cohen thought of women sexually and, in the Jewish Kabbalist tradition, as portals to spiritual oneness with the divine.

For Cohen, connectedness with God and among persons are inseparable. We don’t get one without the other. To the extent that we jettison, abandon, or transgress these commitments, we undermine the order of the world. And no flourishing comes from that. Doron Cohen (a Leonard Cohen scholar who is no relation to the singer-songwriter) quotes Leonard:

“Into the heart of every Christian, Christ comes, and Christ goes. When, by his Grace, the landscape of the heart becomes vast and deep and limitless, then Christ makes His abode in that graceful heart, and His Will prevails. The experience is recognized as Peace. In the absence of this experience much activity arises, divisions of every sort.”

It was the “divisions of every sort” that occupied Cohen’s work. We get there by refusing relationship.

Early in his career, he expressed our foundational connection with others this way:

Passing others by precludes seeing and seeing to them. It makes us blind. A few years later, Cohen  wrote of the relationship with God in his 1984 psalter Book of Mercy: “We are made to lift my heart to you [God] … travel on a hair to you … go through a pinhole of light … and fly on the wisp of a remembrance” to you (“Not Knowing Where to Go”).

From God, to others, to lovers … There’s a trove of Cohen’s work on women, beginning with the 1967 song “Suzanne”:

From body to mind. Relations of love and spirit. And yet.

Although we are made for relationship, Cohen knew that he — we — breach it daily. Inconstancy, self-interest, and self-protection are the human condition. Cohen was unable to stay constant to God and to find peace with himself. He stayed no more constant to women. Anxious of being overwhelmed, subsumed by the demands of relationship, fearful that his autonomy would be punctured by the exposure and neediness of intimacy, he bolted. “The condition that most elevates us,” he said, “is the condition that most annihilates us, that somehow the destruction of the ego is involved with love.” Or so he feared.

In the 1984 song “Night Comes On,” Cohen wrote one of his most self-revealing lines: “I needed so much to have nothing to touch/I’ve always been greedy that way.” To be free of needing to touch — how tempting hermeticism is.

Why? What gets in the way of sustaining relationship? Everything human. We think some self-interest is better and safer than connectedness. We follow the call of Babylon and “Boogie Street,” two running themes in Cohen’s work. In “Closing Time” (1992), Cohen writes, “Looks like freedom but it feels like death.” We cannot stay in relationship because we fear it’s murder of the autonomous self so we choose “freedom,” which feels like death.

Who is responsible for our yo-yo between relationship and self-interest? On one hand, Cohen faults himself and humanity. In “The Window” (1979), Cohen writes:

“Why do you [God] stand by the window
Abandoned to beauty and pride
The thorn of the night in your bosom
The spear of the age in your side?”

Why, Jesus, do you bother to stand at the window to the world, exposed to all, while humanity, self-absorbed with beauty and pride, abandons you to the crucifixion’s spear?

“Lover Lover Lover” (1974) encapsulates Cohen’s frustration: “He [God] said, ‘I locked you in this body/I meant it as a kind of trial.’” Here, God admits that he made us for committed love yet gave us bodies — wandering desires — that betray it. What kind of rigged “trial” is that? What kind of God?

Cohen’s diagnosis of our political sins continues the relational theme. We don’t breach commitment to God, lovers, and others one by one; we do it all at once. Cohen’s dark Trinity.

Cohen’s 1992 song “Democracy” is a template for his political thinking. He begins with our political betrayals and aggressions. From the struggles against tyranny and with the police, poverty, homelessness, and prejudice, democracy may come “to the USA.” But then Cohen moves to the graver ill — lost prayer, grace, and the caring of others, here expressed as the Sermon on the Mount. Cohen writes,

“from the staggering account
of the Sermon on the Mount …
From the wells of disappointment
Where the women kneel to pray …
Democracy is coming to the USA.”

The political covenant of democracy will emerge from the covenants preached in Jesus’s sermon and remembered in prayer. If we betray these bonds, little remains to hold the world together. And that’s how we got to “divisions of every sort,” to our abandonment, self-absorption, and violence.

At the end of his life, Cohen remained frustrated by himself, humanity, and God. Yet, in his last song collection, You Want It Darker (2016), there is a move from frustration to something like assent. The title song ends with the Hebrew word “hineni,” meaning, “I am here for you,” which Cohen addresses to God. This is Cohen not in anger but in relationship, assenting to the interlocking commitments to God and persons. This is the world God made. The paradox of being relational but unable to sustain relationship must be lived with. But the effort to keep relationship, to see to others, is the human covenantal task. Without it, we come to the “divisions” that beset us.

In Cohen’s words: “Raise a tent of shelter now/though every thread is torn” (“Dance Me to the End of Love” (1984)). Although the tent threads are torn and offer no protection, there is no avoiding the effort to make shelter and commitment. For relation is the condition of our (isolated) being.

Marcia Pally is a professor in Multilingual Multicultural Studies at New York University and has written numerous books and articles on culture, religion, and politics. Her latest book is From This Broken Hill I Sing To You: God, Sex, and Politics in the Work of Leonard Cohen.