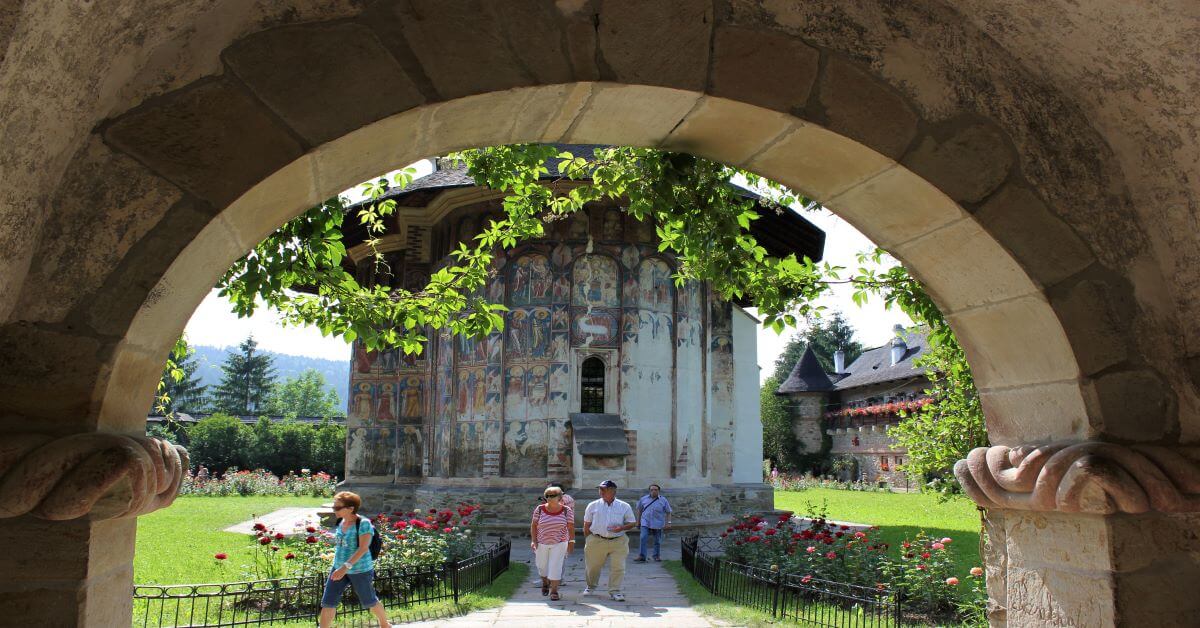 The Christian communities of the Balkan Peninsula, the Carpathian Mountains, and further north into Russia, have preserved some of the most extraordinary religious monuments of Christian history, many quite old, some of them more recent. Over the centuries, these buildings have transformed the sacred topography of these picturesque regions.

Often little known in the West, these churches, chapels, and monasteries have survived the vicissitudes of  history. In recent decades, they have emerged from the shadow of Soviet communism to become centers of spiritual tourism and renewed scholarship.

These monuments, some with centuries of activity and development behind them, are now centers of devotion, study, and even artistic production with local workshops that produce religious icons and objects. These sites have also become popular tourist attractions. The spiritual and cultural journeys that people undertake to these sites—either alone, or with their families, or in organized groups—allow them to admire aspects of the architecture and art of the buildings in a beautiful setting, learn about local customs, and pray before holy images and relics.

The Coronavirus pandemic has slowed this renewed popularity and hurt some of these religious centers. But a survey of these stunning buildings shows why they have become major draws in Eastern Europe, especially for Orthodox Christians, and why we might hope that they will become even better known once the COVID-19 virus itself passes into history.

Specific monasteries in the Balkans and the Carpathians have drawn increasing numbers of tourists in the last decades. In Serbia, for example, popular sites include the monasteries at Studenica, Žiča, Gračanica, Dečani, Mileševa, and Sopoćani, among others. In Romania, the monasteries at Cozia, Curtea de Arges, Sucevița, Neamţ, and Putna, are among the most famous.

Communities of Orthodox monks and nuns have reinvigorated these large monastic complexes, some with roots as far back as the twelfth century. The individual and collective histories of these sites are complex, with moments of growth and prosperity and periods of collapse. As with much of the cultural production of Eastern Europe, the shifting political structures and especially the Communist regimes of the twentieth century did little to encourage the preservation and continuation of these monasteries. Some were closed off and fell into ruin.

This was the case for the Orthodox monasteries of Romania, situated along the eastern slopes of the Carpathian Mountains. These are some of the most remarkable monuments of the post-Byzantine period—that is, they were built in the decades after the fall of Constantinople to the Ottoman Empire in 1453. The churches preserve a remarkable dialectic between different visual and aesthetic traditions of church architecture and decoration and reveal the networked position of this territory from the fifteenth century onward.

The distinct visual vocabularies of these churches—for which the Church of the Annunciation at Moldovița Monastery is a prime example—interpret in a local context aspects of Byzantine, Slavic, and western medieval modes of building and decorating ecclesiastical buildings. For instance, the church at Moldovița is designed on an elongated triconch plan that consists of an exonarthex (outer narthex) at the west end, a pronaos, a burial chamber, and the main liturgical spaces of the naos with two semicircular apses extending to the north and south and a semicircular apse for the altar projecting toward the east. Although the main layout of the church is Byzantine and Slavic in inspiration, several features are drawn from Gothic models, such as the large three-tier buttresses along the exterior of the edifice, the portal designs with pointed arches, and the tracery of the larger windows in the pronaos.

But perhaps the most distinctive features of Moldovița and other churches from the region are the interior and exterior mural cycles that cover entire walls. Here, Christological, Mariological, and hagiographical cycles are interspersed with historical scenes and full-length depictions of saintly figures and angels. The images were carefully calibrated for the architecture of the church and the function of its distinct spaces. For example, it is no mistake that the Tree of Jesse adorns the exterior wall of the burial chamber. This is an image type that traces the genealogy of Christ, and in particular His human lineage, through Jesse, his son David, the kings of the Old Testament, and then finally through the Virgin Mary. As such, this image highlights first and foremost the notion of lineage—that of Christ in the painted representation, and that of the prince and members of his immediate family who were laid to rest in a space of perpetual remembrance in the burial chamber of the church, extending beyond the painted exterior.

Although other Orthodox churches in the Byzantine and Slavic cultural sphere preserve remnants of painted decoration on their exterior walls, as evident at the Church of St. George at Kurbinovo (1191) and the Church of St. Nikita near Skopje (1329; restored 1480s), the Romanian buildings are the only extant examples that reinterpret and amplify in striking ways this phenomenon, revealing how Byzantine artistic traditions of church building and decoration were continued but also transformed in a new context after the events of 1453. The particular cool and relatively dry climate of the Carpathians, as well as the remote location of the Moldavian churches may explain the extraordinary degree of preservation of their exterior frescoes.

However, this phenomena of sanctifying by visual means the exteriors of religious edifices has a much wider medieval context. In fact, the exterior painted decorations call to mind the low relief sculpted facades of early tenth-century Armenian churches such as the Cathedral of the Holy Cross on Aghtamar Island in Turkey’s Lake Van (begun 921), or a series of similarly adorned churches on the Upper Volga River in the principality of Vladimir-Suzdal that date to the twelfth and thirteenth centuries, including the Cathedral of St. George from Yuryev-Polsky, built between 1230 and 1234. These Armenian and Russian programs of relief sculpture, however, do not cover the exterior of the respective buildings as extensively as the painted murals do on the Romanian churches, nor are the iconographies predominantly biblical and religious in character. Nevertheless, the desire to decorate buildings externally was designed to operate in the context of ritual circumambulation and thus should be viewed as integral to the wider medieval phenomenon of interactions with structures carrying images and inscriptions that encouraged varied audiences to walk around them.

Existing at the crossroads of traditions and competing worldviews, the religious buildings of Eastern Europe, including Moldovița, are not without their tumultuous histories, unfortunately. In the seventeenth century, for instance, Moldovița was attacked and many of its treasures plundered during the Cossack-Polish wars (1648-57). During the second half of the eighteenth century, the monastery closed its doors, and its community of monks dispersed. After World War I, the complex reopened but this time as a convent.

Although most of these visually and historically rich sites fell into disrepair during the Communist period in Romania in the twentieth century, Moldovița benefited from some support from the state. However, many other monasteries closed, and their vast collections of icons, liturgical objects, textiles, as well as manuscripts and printed books were relocated to museums and archives. The Iron Curtain also created actual and ideological barriers, limiting access to sites and rendering much of the relevant literature inaccessible and new fieldwork difficult to carry out. Aside from local communities, who had concerns of their own, few others had access to these monastic sites.

But ever since the events of 1989 and the fall of Communist regimes, a more prismatic picture of the artistic production of Romania and neighboring lands is beginning to emerge. Scholarship that had stagnated throughout much of the twentieth century is being reinvigorated. In 1993, seven of the painted Romanian monasteries, as they came to be known, were added to UNESCO’s list of World Heritage Sites, which in turn contributed to the initiation of important restoration projects. In 2010, the Church of the Resurrection at Sucevița Monastery in Romania was also added to the list.

Today, these Romanian monasteries, as others throughout the Balkans and the Carpathians, have developed a vast tourist economy. This has been the case at least for the last three decades with not only locals taking yearly pilgrimages to these sites, but with tourists from all around. After Romania entered the European Union (EU) in 2007, the borders were further expanded and tourists from all across Europe and the world started visiting and appreciating the monasteries and their charming surroundings along the slopes of the Carpathian Mountains. The monasteries had adapted to these new circumstances, offering guided tours and putting on display precious objects from their collections. Although the income generated is small, it helps support the daily operations, maintenance, and monastic life.

The COVID-19 pandemic has affected tourism across Europe and the world, including the spiritual tourism that these monasteries benefited from. Many visitors journey to these remote locations each year in order to escape city life, admire aspects of the local cultural heritage, and, perhaps more importantly for  practicing Christians, participate in the Divine Liturgy in these monastic settings as well as pray and seek comfort before holy icons and relics. The tourists were certainly not as numerous this year, and due to their daily activities and close interactions, numerous monks and nuns fell ill. But with appropriate measures, aspects of pre-pandemic life are beginning to return, and perhaps in the not-too-distant future the spiritual journeys of Orthodox Christians, and tourism in general, will resume.

Until then, we can learn remotely and plan for our next adventures. Perhaps some will take us among the slopes of the Carpathians and the Balkans, where treasures await.