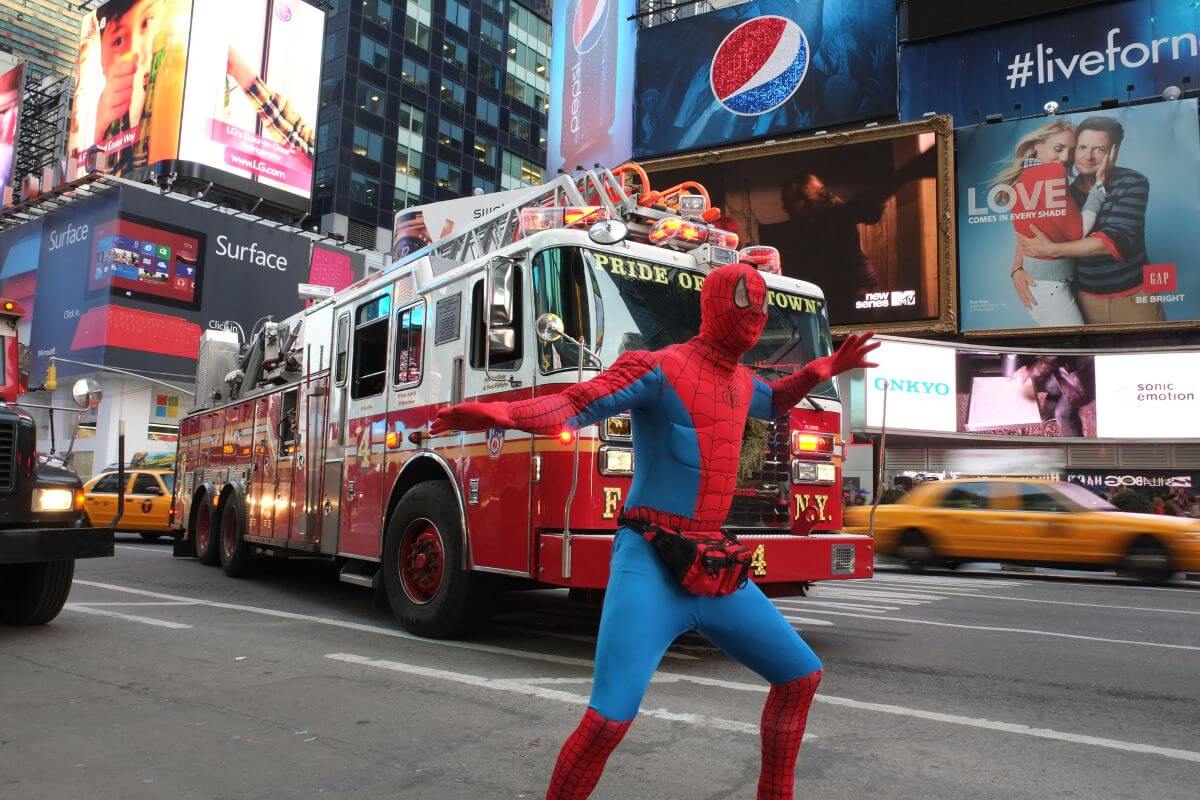 Early in his tenure as Pope, Francis met a bride and groom who volunteer at a charity that brings clowns to visit sick children. They wore red clown noses, and gave him one of his own, which he also wore, leading to maybe the most delightful picture of a Pope there has ever been.

I was thinking of that photo in June when the internet issued a collective LOL over photos of Pope Francis interacting with a guy dressed like Spider-Man. “OMG is Pope Francis in Times Square?” tweeted pretty much everyone who has ever been to Times Square.

The very last thing that anyone should want to do with these kinds of moments is overanalyze them. And yet it’s also true that part of why they create such an enormous reaction worldwide is what they say about Francis’s notions of Church, authority, and—it is Spider-Man, after all—responsibility.

Our community is built around rituals which often bring with them rules not only about the smooth flow of action but the relative value and place of everyone involved. In 2015 when a child wandered on stage during a papal audience and then hung around while Francis went on with his talk, it was a big story precisely because it ignored those unspoken expectations. Francis in a sense refused the exalted role the church and our rituals want to place him in, and the deferential and/or subservient status placed on us. (It has happened other times, as well.)

The Spider-Man and Clown stories are just the same. The Pope allows himself to be just a human being, someone who can look silly and laugh at himself and be okay greeting some dude who thought “You know what I should do with my one wild and extraordinary life? I should meet the pope in spandex.” (In fact, his story is a lot more extraordinary than that.) His actions indicate that we are all worthy of delight and welcome. The Church that Francis tries to embody is a place whose central insight is Come As You Are.

It’s a strange kind of serendipity to have this happen in Rome the same week that the United States bishops voted overwhelmingly to consider a statement meant to provide a rationale for refusing communion to pro-choice politicians, which more than anything seems intended to punish President Joe Biden, a regular Mass-goer. While Francis models a leadership of welcome and openness, the bishops supporting this policy seem to see their role as that of bouncer at the Viper Room, eyeing the clientele and deciding who’s good enough to get in.

The Body of Christ is also reduced in their arguments to a weak tea version of Aunt May, vulnerable and in need of protection. In point of fact Catholic teaching on the Eucharist sees it much more like the radioactive spider that bit Peter Parker. Slowly, implacably, mysteriously, we believe our reception of communion transforms us into a more Christ-like version of ourselves. It doesn’t need protecting, it needs to be shared.

There’s another level on which the appearance of our Friendly Neighborhood Spider-Man at the Vatican feels right. If you were to pick a superhero most likely to want to meet a Pope, you couldn’t do better than Peter Parker. His entire self-understanding is built out of his initial experience as a sinner. People love to quote that line, “With great power comes great responsibility”; but it’s Peter Parker’s refusal to do the right thing and the terrible unexpected consequences coming from that which led him to that profound insight. The responsibility he feels is as much a result of his failure as his power.

So often that’s the way with us Christians; real conversion comes about only after we confront the Green Goblin inside each of us.

At their best, the bishops arguing for this new statement might be understood as trying to provide that moment of confrontation — though a daily communicant who has spent his life in public service and just saved the entire country with the speed of his vaccine rollout doesn’t exactly scream “Supervillain.” More like Captain America.

And yet as Francis has repeatedly tried to warn the clergy and hierarchy – including during the U.S. bishops’ meetings in June — having authority does not exclude you from the story of sin. Self-righteousness is a cause for concern, not confidence. And God does not ask for protection, but for shepherds who allow their own failures to transform them into beacons of mercy and welcome.