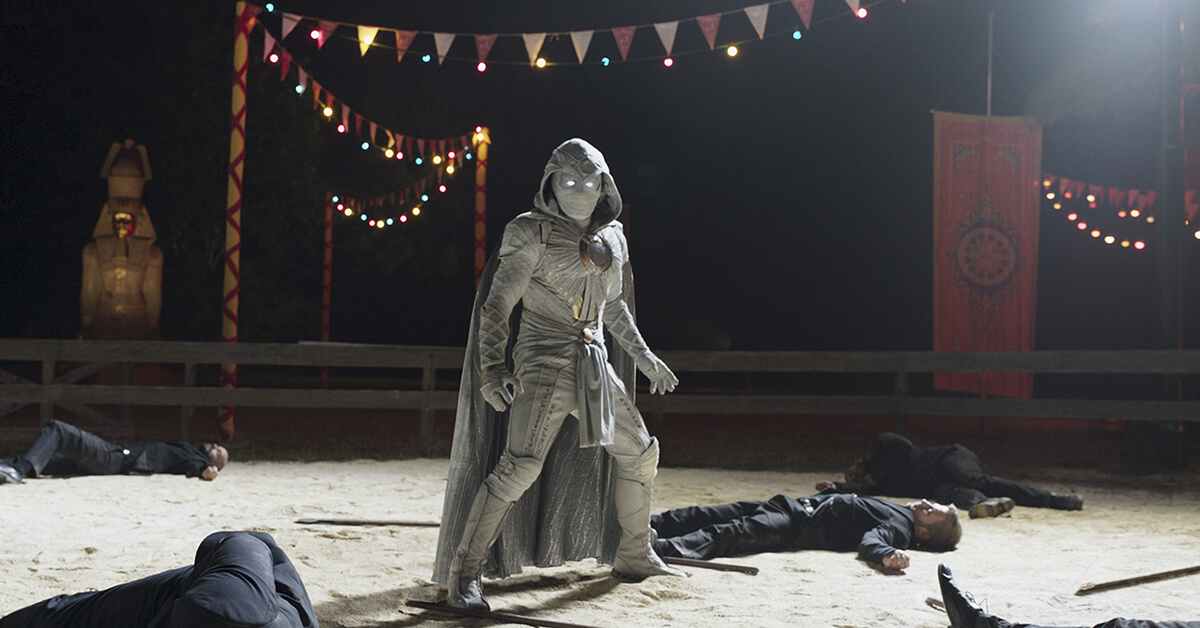 At the end of March, Disney+ will be launching its next Marvel TV Show, Moon Knight. If you’re saying to yourself “Who?,” you are not the only one. The character has never been more than a C-list hero in the comic books. Basically, he’s a Batman who wears white, has dissociative identity disorder, and believes he was chosen by the ancient Egyptian moon god Khonshu to be his avatar. (Did I mention he’s a C-lister?)

Marvel definitely intends the character to achieve a new level of prominence: the show stars Oscar Isaac, Ethan Hawke, and F. Murray Abraham. And maybe it will succeed; maybe the TV show can figure out how to prune back this character who has not only way too many identities but way too much going on. (As much as I’d be thrilled to see a Marvel show offer a hero who is neurodivergent, Moon Knight falls into so many bad stereotypes of dissociative identity disorder. Personally, I would love to see the series alter that aspect of his identity.)

But I have to say, there is one thing about the character that I hope they keep, and that’s the fact that he’s Jewish.

As P. J. Grisar wrote in The Forward in February, Moon Knight’s original creator Doug Moench gave the character a Jewish background, and later writer Alan Zelenetz really dug into the idea, bestowing on the character a father who is a rabbi who fled the Holocaust. The character’s whole origin as a vigilante ends up emerging from his fury at his father’s pacifism in the face of the antisemitism they face in their Chicago neighborhood.

It sounds like an interesting origin story, doesn’t it? It would also make Moon Knight  the first character in the Marvel Cinematic Universe with any explicit religious persuasion. It’s strange but true: for as much as the MCU in recent years has wanted to better reflect the actual diversity of our world, there are really no characters in that whole universe who have any kind of religious identity.

In The Avengers, Captain America self-identifies as Catholic, but we’ve never seen that actually mean anything in practice. There were a number of characters in the original Marvel TV shows that were explicitly religious — especially the Catholic Matt Murdock (aka Daredevil). But whether and to what extent those characters are canon in the MCU remains unknown. (Hopefully, Murdock’s recent appearance in Spider-Man: No Way Home foreshadows good things.)

In the meantime, characters that were religious in the comics have had that aspect written out. The Norse pantheon of gods which includes Thor has been rewritten as super-advanced space aliens who just like the feel of a big beard and a flowing robe. New Captain America, Sam Wilson, is the son of a Harlem Baptist preacher in the comics; he’s from New Orleans and his dad was a fisherman in the movies.

And this erasure of faith has been particularly egregious when it comes to Jewish characters. Wanda and Pietro Maximoff are the children of Holocaust survivors in the comic books; they are astonishingly introduced as members of the Nazi-affiliated HYDRA in the movies.

While Peter Parker has never officially been declared Jewish in the comics, he has traits that Jewish people have pointed to that suggest he is, among them his bookishness, experience of exclusion, and the fact that he grows up in the predominantly Jewish neighborhood of Forest Hills, Queens. When he was playing the live-action role of Spider-Man, actor Andrew Garfield insisted the character was Jewish. The idea was canonical enough that the animated Into the Spider-Verse film had Peter B. Parker step on a glass at his wedding, following Jewish custom. But in the Tom Holland-MCU version, he and Aunt May are Italian.

The problem extends to MCU actors as well: Paul Rudd, Natalie Portman, Jon Favreau, Michael Douglas, Gwyneth Paltrow, Jeff Goldblum, and Scarlett Johansson are all of Jewish descent, but not a single one of their characters is.

In some ways, this eliding of Judaism echoes the origin stories of the heroes themselves. So many Marvel characters were created by Jewish writers and artists: Spider-Man, Captain America, Iron Man, Thor, The Fantastic Four, the Incredible Hulk, and the Avengers, to name just a few. And often the characteristics of these heroes were drawn very specifically from the creators’ own experiences — particularly their feelings of rejection or being an outsider, and their desire to assimilate. Whether it’s Peter Parker, Bruce Banner, or the Lower East Side’s Ben “The Thing” Grimm, what do these characters want? To fit in.

I get that religion is tricky for pop culture. It’s easy to offend people. Also it’s possible to tell  a meaningful religious story without explicitly nodding at a given religion. Despite his clear Jewish origins and references, Superman has long been used as a cipher for Christian stories.

But religion doesn’t have to be an obstacle to storytelling: it can be an opportunity. I think the hang-up is thinking a show that identifies a character as having a specific religious background has to be about their religion. It doesn’t.

Disney+ actually has an upcoming series called Ms. Marvel about a Muslim teenager, Kamala Khan, who gets super powers. In the comics, her religion and culture are woven in as part of the fabric of her family and community, and the results are both delightful and recognizable. She’s not The Muslim Hero; she’s a kid trying to figure out how to date and fight bad guys when your parents won’t let you go out at night. As Noah Berlatsky wrote in 2014 in The Atlantic, “What Makes the Muslim Ms. Marvel Awesome: She’s Just Like Everyone.”

I don’t know what will become of Moon Knight, or whether Marvel will allow the character to remain Jewish. Actor Oscar Isaac was himself raised Christian but has Jewish heritage on his father’ side.

What I can say is this: the whole idea of the modern superhero story came from Jewish people. We should be celebrating that. And the story of a character who fights for justice with an imagination so radically fertile he can lose himself in it sounds like a fitting place to start.