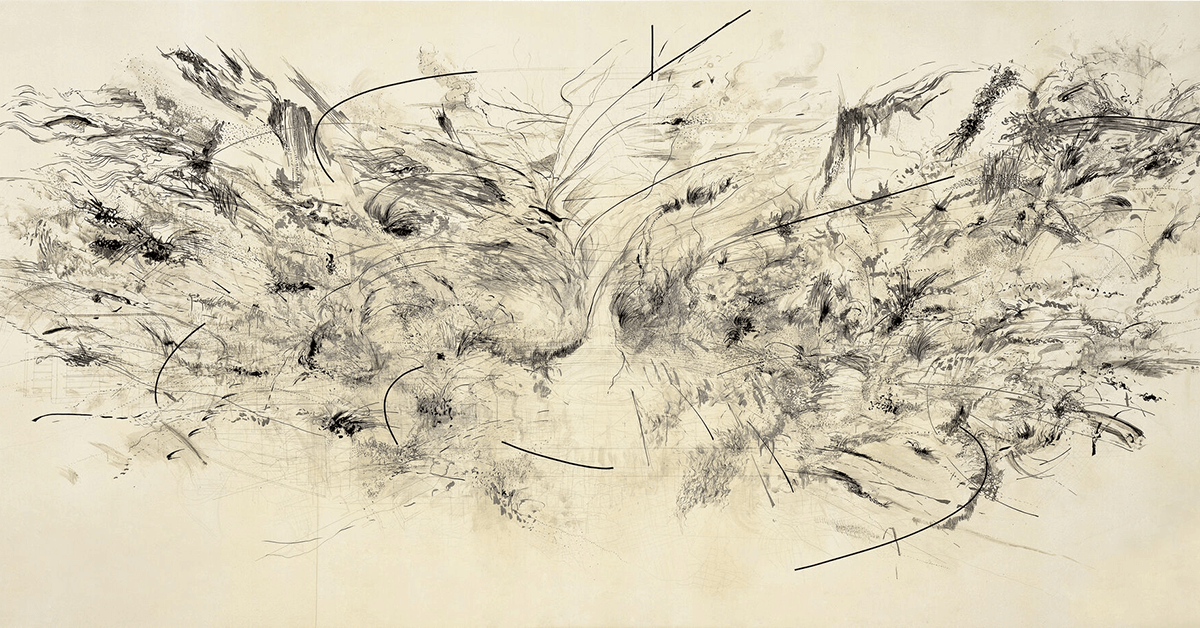 If art is what makes us human, then line is liberation for the artist. Line is one of art’s most irreducible elements, the first mark on a cave wall and the basis for written language. The application of meaning to lines is the spark of human expression and understanding.

Two major exhibitions this summer look at artists who–through line–work towards liberation. Julie Mehretu’s mid-career retrospective at the Whitney Museum of American Art and Alice Neel’s retrospective People Come First at the Metropolitan Museum of Art present us with two master painters on opposite sides of the spectrum between abstraction and representation.

Mehretu paints verbs. Her monumental abstractions explode on the picture plane. They revolt, riot, rally, and reform. Lavishly layering lines, her paintings transcend and reimagine. Through abstraction Mehretu re-envisions our shared world. In the exhibition’s introductory canvas, “Transcending: The New International” (2003), sweeping gestures contrast tightly-controlled architectural renderings for a stadium, a place of public gathering. A system of characters made up of inky brush strokes, linear hatches, organic doodles, blobs, blots, and blips move around the radial composition forming a massive mushroom cloud best viewed from a distance. Up close the delicate architectural renderings begin to reveal themselves. Mehretu makes the viewer move around the space with a push/pull effect one can only fully appreciate in person. You feel as if  you can practically step into this twenty-feet-wide painting when entering the exhibition. Here we are, walking into Mehretu’s world.

Mehretu’s biography is important, possibly essential for understanding her work. She was born in Addis Ababa, Ethiopia in 1970 to an American mother and Ethiopian father. In response to escalating political instability, her family relocated to East Lansing, Michigan when Mehretu was seven years old. In the exhibition catalog, curator Christine Y. Kim writes that as an undergraduate Mehretu studied art, art history, and liberation theology at Kalamazoo College. These disciplines continue to reveal themselves throughout her work. Mehretu accompanied her father’s students from Michigan State University on a summer program to Rome, “where she encountered Old Master works such as Caravaggio’s Martyrdom of Saint Matthew … that would come to inform her own monumental works.” History and politics inform her imagination.

As a queer, Black woman Mehretu is concerned with negotiating systems of power. In this year’s Walter Annenberg Lecture, Mehretu spoke about the concept of world-building, “where and how in making can I find freedom? Can there be space to invent something else and insist on that other thing?”

The exhibition’s opening painting has a sister that appears in a later work, “The Seven Acts of Mercy” (2004), from the same series. This slightly larger canvas is even more marked up. The explosion we were on the verge of entering is now suddenly a whirlwind around us — a revolving revolution. Yes, Mehretu is situating herself in the history of painting by referencing Caravaggio, but she is also providing us with verbs. She provides us with the seven verbs necessary for the radical world-building she imagines: feed the hungry, give drink to the thirsty, clothe the naked, shelter the homeless, visit the sick, ransom the captive, bury the dead.

While Mehretu paints verbs, Alice Neel painted nouns: people mostly, but sometimes also places and things. A figure painter born in 1900, Neel was easily dismissed as a traditional artist for most of her career, given the twentieth century’s bent towards abstraction. It wasn’t until Second Wave feminism of the 1970s that her name was brought out of obscurity. She now serves as the perfect foil to Linda Nochlin’s famous 1971 question “Why have there been no great women artists?” Although the women’s liberation movement platformed Neel at the tail end of her career, the Met’s retrospective presents the radical humanism of her full oeuvre spanning seven decades.

One of the show’s most demanding works is its most abstract: “Black Draftee (James Hunter)” (1965). The sitter’s body is sketched out but left unfinished; only the face and left hand are fully rendered. Neel’s process is on full display—we can see exactly where she stopped and called it complete after her sitter didn’t show for a second visit. Her use of line is stark and economical, with very little material it expresses a lot of information. The subject’s expression is apprehensive, reserved, and foreboding. With one hand he grips his chair uncomfortably and rests his cheek in the other. Although so much of the painting is left unfinished, it is easy for us to make sense of it. We see a man sitting in a chair. Quickly our gaze shifts from what we see to what we don’t see. We wonder: why was it left unfinished? Why is he upset? Did he head to Vietnam or dodge the draft? Did he survive the war? Our questions move from the specific to the universal as we look at this painting. It speaks to our current cultural moment. Do we as a society treat Black men as disposable? Do we allow—or even encourage—them to vanish into the margins? What good is liberation if it allows some to disappear?

The action of world-building captured in Mehretu’s abstractions is depicted on Neel’s canvases. Neel’s sitters are full of life, often literally. Some of her most affecting works are her portraits of pregnant women in their last trimester. Their bodies are unsentimentally illustrated, packed full, stretching with new life. As the retrospective’s title declares: “people come first” for Alice Neel. The people in her portraits are Black boys, Afro-Latina girls, labor activists, civil rights leaders, outspoken feminists, drag queens, writers, neighbors, lovers, and her own children. She captures them all intimately, honestly, and lovingly. Overheard hushed conversations in packed gallery spaces kept circling back around to a similar idea—we feel like we know these people. They are familiar to us. Her signature thick black and blue contour lines imbue the flat surfaces with a lyrical soul-giving touch from the artist’s hand. With this subtle move towards abstraction her paintings sing. They sing a hymn of amazing grace.

The idea of world-building essential to Mehretu’s work and in a similar way at the core of Neel’s practice is what Christians might refer to as kingdom building. How do we live for the greater glory of God? The role of the artist in society is to imagine. Neel and Mehretu both imagine a world where the marginalized are brought to the center. Through their art they work towards liberation.