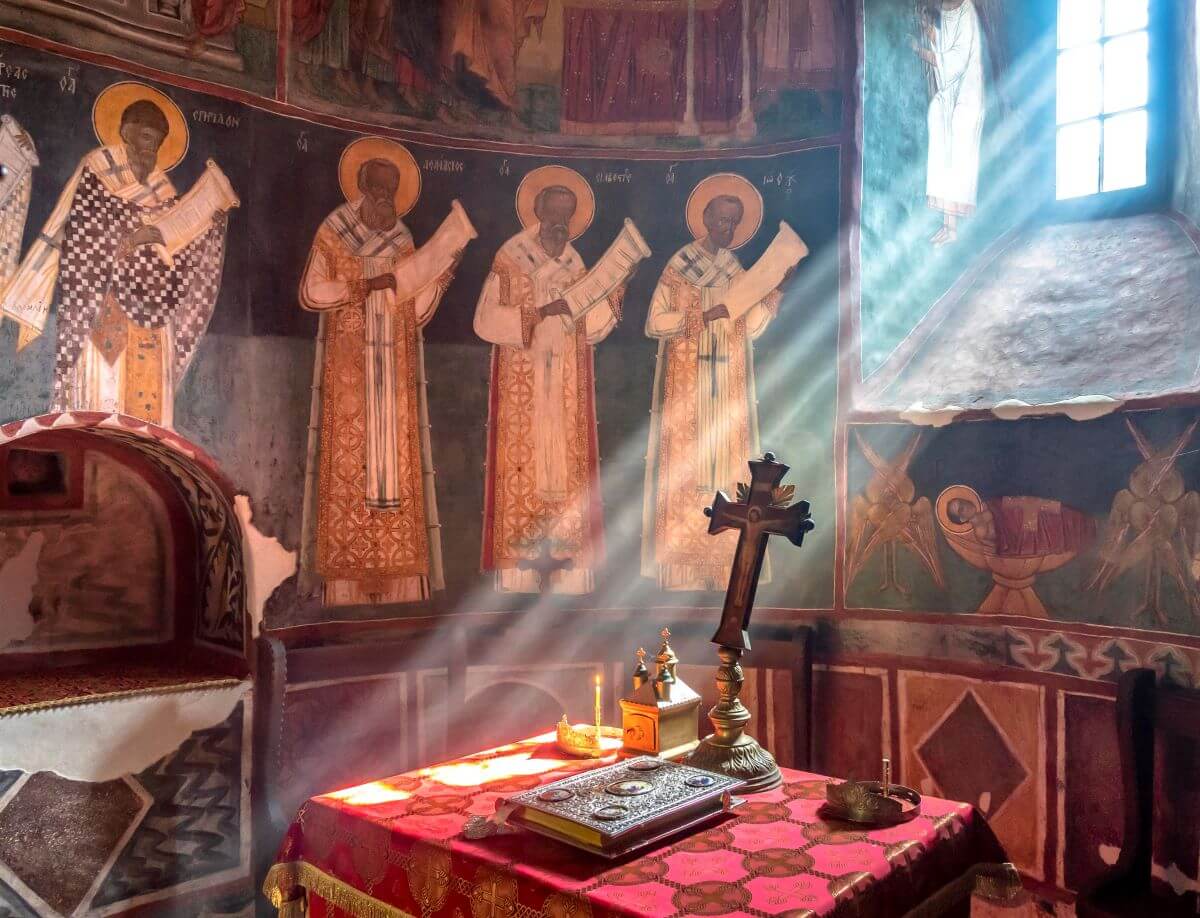 December marks the arrival of both the shortest day of the year in the winter solstice and religious festivals that take light as a central motif, such as Hanukkah and Christmas. It is a good time to remember that natural light has been harnessed in sacred spaces to indicate holiness since Antiquity, and to note that recent research is revealing the elaborate and intentional nature of those efforts.

We have long known that Egyptian temples were built according to axial solar alignments that illuminated the statues of the deities on specific days of the year. In the Christian tradition, carefully observed cosmic phenomena have informed the orientation and distinct architectural features of churches throughout the Middle Ages. But recent studies have demonstrated that religious spaces were often meticulously designed relative to the movement of the sun across the sky, and light effects served as a unifying feature, bringing together the architecture, decorations, and ritual performances unfolding within sacred spaces.

Scholars have observed that the general East-West orientation of Christian buildings was established so that the rising sun first illuminates the altar. This draws the connection between natural light as a manifestation of divinity and in particular Christ. “I am the light of the world: he that follows me, walks not in darkness, but shall have the light of life,” Jesus says in the Gospel of John. But whereas these daily manifestations of the divine (or theophanies) reinforce the associations of natural light and holiness, especially during the celebrations of morning liturgies, additional light phenomena evident throughout the year were deployed with precision to underscore other theological statements.

Italy preserves several key examples. The church of St. John the Baptist in Gravedona (now Santa Maria del Tiglio, built during the twelfth century on the site of the earlier church), displayed in the apse a mural of the Adoration of the Magi that was selectively illuminated. Sunlight was allowed to fall only on the Virgin Mary, the Christ Child, and on the gifts he received from the Magi. In the eleventh-century Cathedral of Pisa, a round-arched window on the south side of the nave permitted a single beam of sunlight to shine through at noon every March 25th and illuminate a shelf with a marble egg beneath it (a symbol of birth) on the opposite (north) wall of the nave. March 25th is the Feast of the Annunciation and the beginning of the Pisan New Year as established in the tenth century. Other similar effects are found  throughout medieval churches, demonstrating that knowledge of cosmic phenomena was carefully implemented in the design and decoration of each sacred building.

The sun’s path during the fixed dates of the solstices and equinoxes proved to be particularly relevant. Construction of the Orthodox church of the Holy Cross at Pătrăuți Monastery in Romania was begun in 1487 on the day of the summer solstice (according to the extant dedicatory inscription on the building’s west façade, set above the main entrance). The church’s current priest, Father Gabriel-Dinu Herea, has carefully observed and recorded several remarkable light phenomena inside the church over the last fifteen years. Around the spring and fall equinoxes – March/April and September, respectively – a “light path” is formed along the axis of the church for about two weeks. Each afternoon, between about 5:40 and 6:00, the sunlight aligns directly with the narrow doorways at the thresholds and illuminates the altar. This alignment would have corresponded with the celebrations of Vespers, which centered on Christ’s coming as Light into the darkness of the world.

Around the solstices, additional light effects are evident at Pătrăuți. During the winter solstice, for example, which in 1487 took place on December 13th (and this year it will occur on December 21), a sunray entering through the south window of the naos illuminates the image of St. Auxentius situated inside the niche on the north wall, near the sanctuary. This occurs around 1:00 pm on the feast day of the saint, suggesting that perhaps a special celebration in his honor took place on this day after the liturgy. Around this same time, a sunray entering through the south window of the pronaos, falls directly on the image of St. Zosima and St. Mary of Egypt painted above the main entrance. The light illuminates the chalice with the Eucharistic Christ in between the two holy figures, thus underscoring once again the image of Christ as the “Light of the world.” Father Herea from Pătrăuți has recorded these and other relevant light effects inside the church, which demonstrate the precise planning and decorating of the edifice relative to the movement of the sun across the sky.

Similar choreographed sunlight effects have been observed in the Spanish Mission churches of the United States, Mexico, and Central America. On the winter solstice – the darkest day of the year – the sunlight entering these churches illuminates specific objects within, including the altar. The California missions, established by Spanish Franciscans between 1769 and 1823, reveal careful coordination between architectural design, decoration, furnishings, and astronomical know-how. Prof. Rubén G. Mendoza (California State University, Monterey Bay) has conducted on-site research and has identified specific illuminations inside these churches during the solstices and equinoxes. At these sites, directed sunlight is deployed to underscore important Christological events, such as the birth of Christ. Although this work  continues, the study can be more directed to confirm hypotheses or reveal new data once the research questions have been identified.

In recent years, it has become increasingly evident that natural light effects were carefully orchestrated in sacred buildings through the orientation of the edifices, as well as the position, size, and shape of the doors and windows. These phenomena would have been complemented and enhanced through the use of artificial lighting, and in the context of ritual performances, although these ephemeral facets of religious spaces are more difficult to study and recreate. Nevertheless, careful study of the buildings themselves, as well as modern simulations, can recreate the multitude of sensorially-rich phenomena that unfolded in religious buildings. From these, natural light emerges as a unifying factor.

The virtual workshop “Licht aus dem Osten? Natural Light in Medieval Churches Between Byzantium and the West” – co-organized with Vladimir Ivanovici (Accademia di Architettura di Mendrisio, USI, and Masaryk University) – was the most recent gathering of international scholars around the topic of natural light in sacred buildings. The November 26-27 event brought to the fore aspects of the structuring of sacred spaces relative to light and darkness, light’s capacity to bring together features of the architecture, decorations, and ritual aspects, as well as new theoretical questions and technologies in the study of natural light. This event and the forthcoming publication of the proceedings constitute efforts toward more serious and interdisciplinary approaches to the study of light in religious buildings of the premodern, modern, and contemporary periods.

Light’s capacity to structure, define, and enhance sacred spaces has certainly been central to the design of ancient, medieval, and modern sites and buildings and it is a growing topic of study. Through careful observations, precise measurements, and meticulous simulations, light may emerge as a quintessential facet of the structuring of sacred spaces, past and present.

The Symbolic Presence of the Sun at Pătrăuți (Timișoara: Editura Universităţii de Vest, 2020). English translation of study written in Romanian by Gabriel-Dinu Herea, with a foreword by Marc Eduard Frîncu, and an introduction by Vladimir Ivanovici.

Alice Isabella Sullivan, Gabriel-Dinu Herea, and Vladimir Ivanovici, “Space, Image, Light: Toward an Understanding of Moldavian Architecture in the Fifteenth Century,” Gesta 60, no. 1 (2021): 81-100.