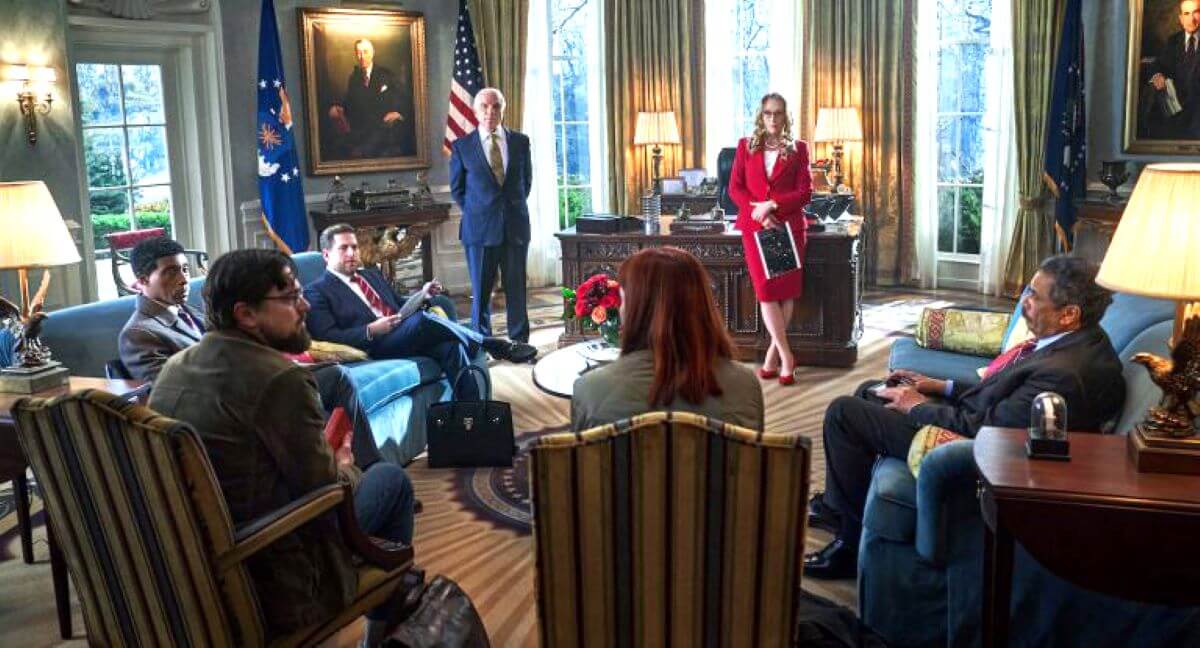 You’ve surely heard about Don’t Look Up, even if you haven’t yet seen it. A comet’s trajectory for Earth is identified by graduate student Kate Dibiasky (Jennifer Lawrence) and her Michigan State University advisor, Dr. Randall Mindy (Leonardo DiCaprio). Stunned, they are drafted into the vortex of governmental science, political messaging, click-bait media, and entrepreneurial technocrats while trying to signal to a largely nonchalant and erratic audience that this “extinction-level event” is, in fact, going to destroy life on Earth in six months. With cinematographic stop-frame pacing, a rollicking soundtrack, and sardonic yet earnest and often hilarious dialogue recognizable to aficionados of The Big Short, director Adam McKay spins a contemporary diagnostic about how human societies governed by short-term economic and political thinking relate to our most flagrant atmospheric portents.

Many commentators have rightly remarked upon the parallels with our own civic, pandemic, climate-crisis moment in the United States. There’s the opposite-of-subtle but damningly appropriate depiction of political-corporate collusion and willful collective delusion at the hands of United States President Janie Orlean (played as a convincing narcissist by Meryl Streep) and CEO Peter Isherwood (Mark Rylance), a billionaire tech entrepreneur (his company is the aptly-named BASH Cellular) whose modest demeanor belies the power he wields as a shadow influence on government. There’s the steadfastly scientific but politically over-it Planetary Defense Coordination Office director Dr. Teddy Oglethorpe (Rob Morgan) who makes the call to leak news of the comet to the media after the scientists are rebuffed by President Orlean and her sniveling, self-satisfied son Jason (Jonah Hill).

But several topics that have received little scrutiny and are frequently skirted in commentary can rightly be called theological. What role does religious faith play in Don’t Look Up? Is there such a thing as divine action? What kind of thing is God, and how does that relate to scientific knowledge? Where should people place faith and trust in this cataclysmic moment?

Here are three places where theological topics percolate persistently: the theme of blind misplaced faith; the zealous ideology of profit and technocratic solutions; and the dynamic question of divine action, scientific knowledge, and human responsibility.

First, the theme of blind, if fawning, forms of misplaced faith is omnipresent in Don’t Look Up. We see it in sycophantic nationalist crowds, in a political religion surrounding President Orlean, whose willfully myopic populace parrots her certainties that it will all be fine, that there is no need to look at what’s hurtling towards Earth. Then there’s the blind faith in technocratic approaches — the melding of technological innovation and neo-liberal frameworks — in CEO Isherwood’s ability to persuade the federal government that, in fact, the comet is too financially lucrative to destroy: it must be mined for profit. Through these scenes and others, Don’t Look Up ably depicts the quasi-religious, late capitalist desire to believe in that which conduces to our own self-affirmation — to cling to a notion of the world in which we will, surely, be vindicated — or from which we at least stand to benefit.

Second, the entrepreneurial pursuit of profit is portrayed as its own religious ideology. Early in the film, Isherwood addresses a hushed audience that awaits his announcement of a new smartphone-health surveillance system as a crowd might await a vaunted TED speaker or Joel Osteen: promising an easy answer to life’s perils in a short, visually pleasing presentation. We are introduced to BASH CEO Isherwood as if to a guru, a savior, or an exotic and rare species worthy of protection. Before Isherwood shuffles onto the stage, a pleasant and disembodied female voice reminds the audience: “Please remember to avoid direct eye contact, sudden movements, coughing, or negative facial expressions. And now, please welcome Sir Peter Isherwell!”

Indeed, it’s no accident that the BASH technologies auditorium features a larger-than-Sistine-Chapel portrayal of Michaelangelo’s famous ceiling at the Vatican, but with a BASH phone hovering between the two outstretched hands: “It all started with a connection … a simple gesture that created so much …” The disembodied voice continues: “Sometimes it can even feel like too much. Until now! Introducing BASH Liif.” As an image on the backdrop displays the words “LET THERE BE LiiF,” the voice continues: “Life, without the stress of living.” Why have real relationships when they can be digitally mediated? Immediately after this appearance, Isherwood dismissively waves away a child, receives a picture of the comet with the words “DIRECT HIT” written in Sharpie, and thus begins the collision course between economic ideology and political power.

The third site of theological themes is my favorite. What explanations do humans give for such cataclysmic events? What are the appropriate moral stances to take? What kinds of actions matter?

Comets, earthquakes, and divine disasters have long been interpreted in the religious West (as in many cultures) as signs and manifestations of divine powers. Christians — especially fundamentalists, who try to read the Bible literally and apocalyptically – have been especially prone to interpret hurricanes, floods, and other ecosocial disasters as “divine will.” We see a glimpse of this with Yule (Timothee Chalamet), the post-evangelical skateboarder, who says while stargazing with Kate: if God’s in control he could have just planned this whole thing, so what does it matter?

Indeed: why bother? If the end of the world has long been prophesied, shouldn’t we just go with the flow?

But then again … how would we know? In contrast to Yule’s response of “who knows, why bother?” (or the “Don’t Look Up”-ers, for that matter) there are the scientists, data-driven and attempting to foment appropriate responses to an objective material reality hurtling toward Earth. Dr. Mindy’s appraisal is one of mathematical calculations and statistical significance: he’s never seen such a firm astrophysical trajectory in his entire career. That judgment has nothing to do with religion, but everything to do with basic beliefs in the reliability of observations about the natural world. The ethical implications and moral negotiations that follow for Mindy are, of course, interpersonal, professional, and familial.

It’s with Kate Dibiasky that the most interesting questions about belief in God and the meaning of human choices get maximum air time. When Yule and Kate recline on the rooftop, looking into the depths of space, Yule says that God might be making all this happen.  Kate, though, is unwilling to commit to such direct causality, or to the idea of God at all. In many ways, the scene is about Yule, who confesses that he was raised evangelical and that he’s made his own peace with God after rebelling. But to me, it’s Kate’s quiet agnosticism that makes the story work, in that scene and throughout the movie. There is so much we cannot know, and also much that we can. What do we choose to acknowledge, and what do we do with what we know?

We do not know if Kate believes in God. We only know how she handles the moral-apocalyptic dilemma at the moment.

Near the end of the movie, when the protagonists have assembled to dine at the Mindys’ before the world ends, Yule again becomes the center of the scene. “I’ve got this,” he says to the table, after the vague question surfaces about whether the group should pray. And what Yule prays for — well, that, too, bears great indebtedness to Christian monotheism: “Dearest Father and almighty Creator, we ask for your grace tonight, despite our pride; your forgiveness, despite our doubt. Most of all, Lord, we ask for your love. To soothe us through these dark times. May we face whatever is to come in your divine will with courage and open hearts … Amen.”

A few commentators have observed the power of this “sacramental” moment. Director Adam McKay himself noted, in an interview with Allison Stewart on All of It, that this is his favorite scene of the movie. For McKay, it represents “pure faith.” These are remarkable statements, worth pausing on. McKay’s point, as he elaborates it in radio and print, is that when religion is used politically in the United States, it’s easy to forget about “pure faith.”

In many ways that ending scene is beautiful, and as some interpreters would have it, redemptive: the holding of hands, in a circle, as the world ends. It’s been named a Last Supper, a sacramental correction to the “strangled and subverted Christianity” portrayed in the rest of the movie.

But it’s also telling that what counts as “pure faith” in Don’t Look Up is a prayer uttered in Christian language, invoking God the Father and evangelical modes of expression in structures of language that Yule (and perhaps McKay) claims to have moved beyond. It is, of course, a very explicitly Christian prayer, structured in the cadence and language of Yule’s youth. It may be heartfelt, but it’s neither unconditioned nor unanimous.

Around the table, there are gentle Amens, a few smiles, and “Wow, you’ve got some Church game” from the otherwise buttoned-up Oglethorpe. Kate smiles softly, leans over, and says: “That was beautiful,” as she kisses Yule on the cheek.

But for me, Kate’s words a few moments prior seem to linger more poignantly than Yule’s prayer. “I’m grateful that we tried,” she whispered.

Those words are as much “pure” prayer as Yule’s expository moment. Yes, it’s a different kind of statement, an utterance into the space of a question: an agnosticism not about how the world ends (that much is very clear), but about the task of being human.

And in response, nodding quietly, the friends look around, holding each other’s gazes. They don’t look up.

Christiana Zenner is an Associate Professor of Theology at Fordham University.