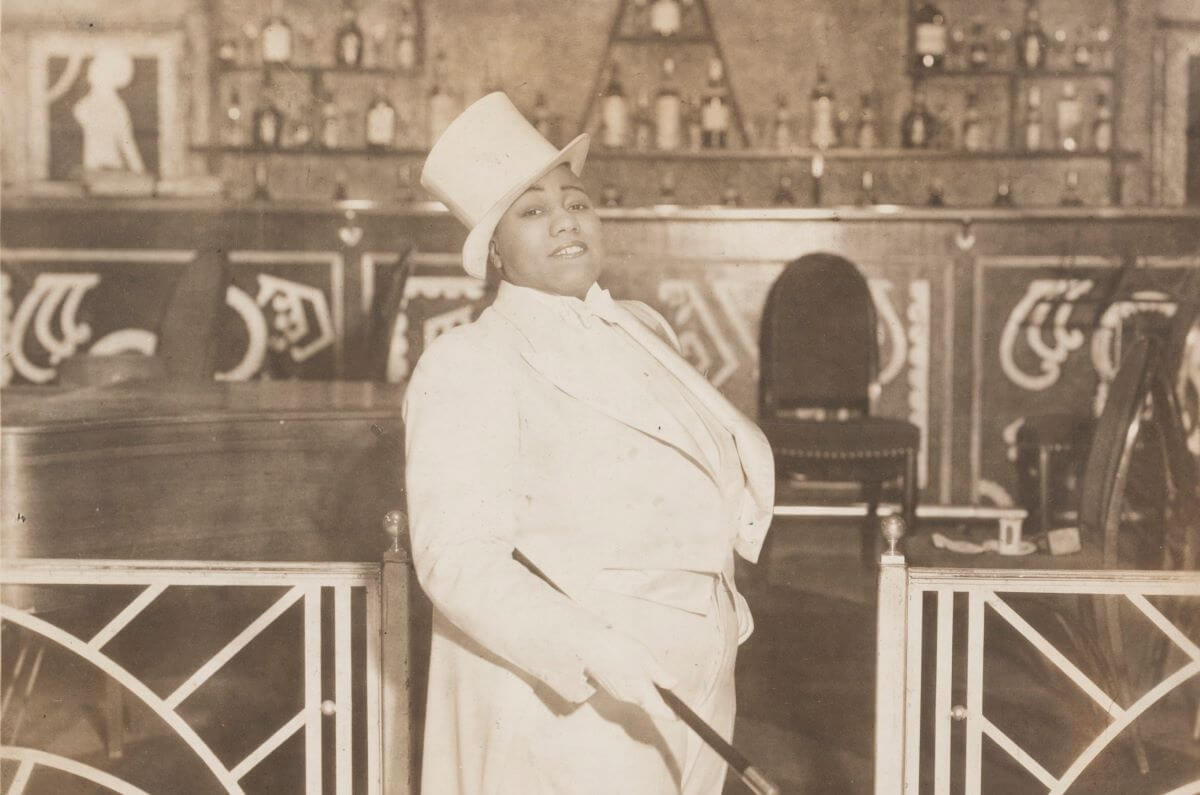 Gladys Bentley was a triple threat—a singer, a dancer, and a lesbian. She rose to fame during Prohibition in New York City, entertaining speakeasy audiences with performances testing the boundaries of gender and sexuality. Although she was a talented singer and pianist, her lyricism and queer presentation truly made her stand out.

She sang her own original music as well as risque parodies of popular songs, all while wearing a suit and flirting with the women in the audience. Her performances became infamous across the country, and Bentley was often referenced when decrying the debauchery of speakeasies and the lax social standards of that time. Although Prohibition ended in 1933, Bentley’s career did not. She continued to perform in Harlem at venues such as the Ubangi Club and King’s Terrace without much change in her material—still bawdy, still queer. In 1937, she took her talent to California and stayed in San Francisco and Los Angeles.

Gladys Bentley was able to build her career on being shockingly and unapologetically queer until August 1952, when Ebony magazine published her article “I Am a Woman Again.” In this piece, she wrote that she hoped to help others living “between the boundaries of the two sexes” by sharing the story of her “recovery.” She started with her childhood—her mother had wanted a boy, which Bentley claimed pushed her to be masculine. When she moved to New York to perform, she added butch behaviors into her stage persona to give herself an edge over other performers. The people who came to her shows wanted to see the spectacle of a masc lesbian as well as her talent. According to Bentley, she continued on this path both publicly and privately, never marrying and acting and dressing masculine. When she was finally ready to experience the “miracle” of a man’s love, she went to her doctor, who supposedly prescribed her the “injection of female hormones.” After this, Bentley stated that she was able to embrace her role as a woman.

Almost every scholar who has examined Bentley’s life agrees that she published the Ebony article to escape persecution during the McCarthy Era and the Lavender Scare. Red-baiting officials often conflated communism and homosexuality, and actors and actresses were being accused and then blacklisted. Throughout Bentley’s article, there are hints and untruths that make it clear that she was not actually called back to heterosexuality through the grace of God and the magic of modern medicine. For example, she slipped in a reference to The Well of Loneliness, a lesbian pulp novel that was released in 1928, around the time she first started performing.

In her article, Bentley also claimed that she was married to J. T. Gipson, a columnist for the California Eagle. Most facts in the Ebony piece can’t be disproved as easily as this one. First of all, J. T. Gipson publicly denied his marriage to Bentley as soon as he heard about the magazine article. Secondly, he was married to another woman, Gertrude Estelle Lomax.

The same month that the article was published, Bentley married a man named Charles Roberts. However, her new husband’s name was conspicuously absent from the article, and so we are left to doubt the validity of this relationship. This marriage did not last long, and they had no children together before separating. After September 1952, the two were never mentioned together again. This clearly was a marriage of convenience, brought on by Bentley’s need to prove she was straight.

If Gladys Bentley was speaking truthfully about her break from a life of purported immorality, it did not last long. In 1957, she showed a reporter two pictures—one of her husband, and one of her wife. Her performances didn’t change much, either. She was still advertised as a risque character and shared venues with burlesque dancers. She was very much not the wholesome straight housewife she portrayed herself to be in Ebony magazine. Amongst all of these untruths, it seems unlikely that she went through any form of conversion therapy, despite her claims.

Although “I Am a Woman Again” was almost certainly published for the sole purpose of positive publicity, there are a few reasons that we can’t write it off completely. The first and foremost is the scope that Bentley had as a celebrity. At the publication of the article, she was one of the most high profile people to discuss her struggle with homosexuality. At this time in the United States, on the rare occasion that same-sex attraction was discussed, it was seen as a sin or as an incurable medical condition. Bentley’s article was sympathetic to the queer community in a way that no other sources were. Although we now recognize that the idea of a cure to queerness is very harmful, the Ebony essay gave queer people hope that their lives would improve.

Instead of condemning queer people, her article—beginning on its very first page—discusses her own challenges being queer and how she was simultaneously exploited as a performer and shunned as a person. Only after she established how society had abused her did she explain how she came to conform to it. Her article gave her readers a hope that they, too, could grow to benefit from the society that abused them. The October 1952 edition of Ebony published many letters to the editor thanking Bentley for sharing her story.

The other feature of Bentley’s last few years meriting consideration is her religious life. In her article, she said that she followed the teachings of Unity Church, a strain of New Thought Christianity. The New Thought movement was centered around metaphysics and the personal power of the mind, and Unity Church  professes the power of thoughts to shape events. As Boston University historian Christopher Evans put it, “The term ‘New Thought’ signified that one’s thoughts could unlock secrets to living a better life, free from the constraints of religious doctrines or dogmas.” In short, Unity Church is not a religion which you would claim to follow when trying to establish your traditional values, so we can assume that Bentley was at least partial to Unity Church at the time of publication.

Yet a few years later, Bentley was on track to become a minister at a Baptist church called the Temple of Love in Christ in Los Angeles. Although she may have been shading the truth about her religious beliefs in “I Am a Woman Again” and using Christianity to save her career after the article appeared, there seemed to be little to gain for her professionally by pursuing ordination in a mainstream denomination. That would have been hours of work and dedication just to sell an unconvincing lie. She most likely became a minister because she felt a calling to it.

Of course, this raises questions. How did the raunchiest performer in Harlem become a minister? How did Bentley reconcile her queer identity, which she never gave up, with a religion that shunned her? Despite spending almost her entire life in the public eye, we don’t know much  about Bentley’s private life, religious or otherwise. Most of the insight we have is from her Ebony article, and we can’t know how much of that was fabricated. Instead, we’re left to read between the lines that she left us and try to guess the details of her life. That’s a challenge when your subject only ever wrote in bold strokes.

Lillian Gieseke is a history major at Fordham University and a recipient of the 2022 Spring Undergraduate Research Grant.