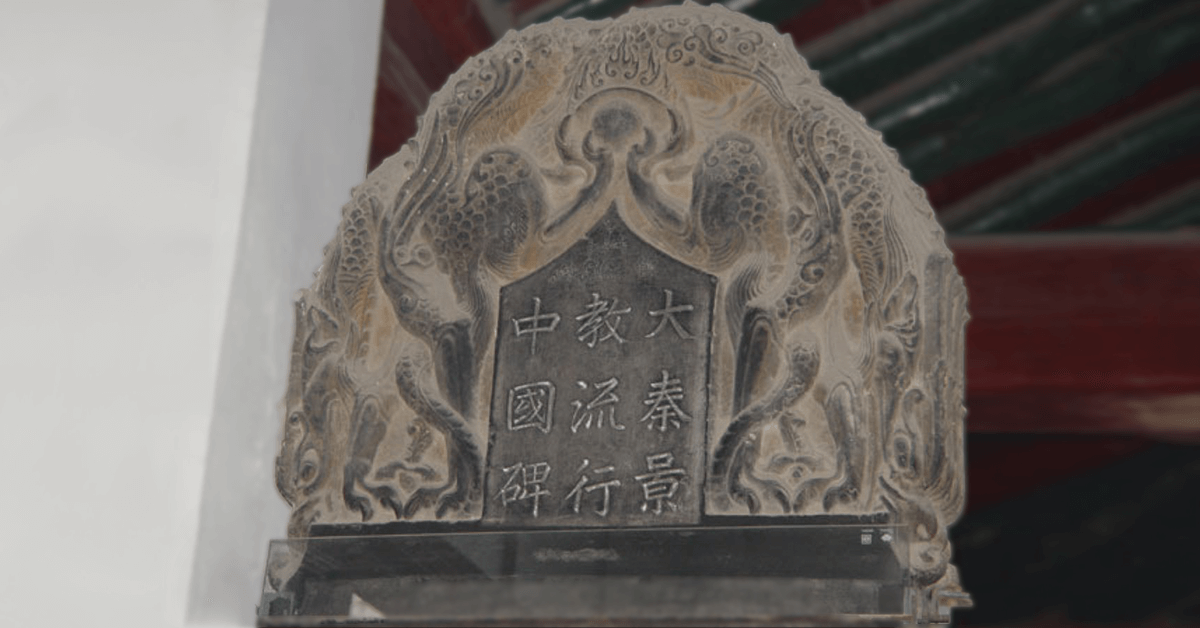 Every country in the world has a famous archaeological find emblematic of its history. For China, this is the iconic Terracotta Warrior Army. Residing in the central Chinese city of Xi’an, these thousands upon thousands of still statue soldiers are the most visually impressive artifacts preserved from ancient China.

Xi’an, however, is also home to perhaps an even more significant archaeological discovery than the Terracotta Warriors: the Xi’an Stele. Since 1907, the Xi’an Stele (or Nestorian Monument) has been exhibited in the eastern portion of the city at a place known as the Beilin, or “Monument Forest.” At the Beilin, China displays many of its ancient monuments in one museum.

It is not immediately obvious why this austere and somewhat foreboding monument is historically important. Engraved texts and only a few images cover the nearly ten-feet-tall Xi’an Stele. To observers who do not speak or write Chinese, only the cross at the top might hint at its meaning.

The Xi’an Stele stands as evidence of the ancient geographic relationship between East and West across Central Asia. As the cross suggests, moreover, it is also one of the most concrete proofs of the presence of Christianity in China prior to the early modern period. The Stele’s title succinctly expresses this meaning:

Scholars usually translate this sentence as something along the lines of “Monument to the Propagation of the Luminous Religion of Rome in China.” This “Jǐng jiào,” or Luminous Religion, is the first name under which Christianity entered China.

The Stele itself has an interesting and mysterious history. Accounts disagree on exactly when and where it was discovered. Some record that it was unearthed during a construction project in the early seventeenth century. Others say a farmer ploughing his field accidentally hit upon it. One interesting theory is that it was found while digging a grave for the dead child of Xi’an’s governor. One common thread runs through all these accounts: that the Stele had been found buried in the ground somewhere near Xi’an city during the early 1600s.

The manner in which the Xi’an Stele was discovered raises one crucial question puzzling scholars for centuries. Why had it been buried?

To answer this question, let us place the Stele in the context of Chinese history. Its inscription confirms it was erected on February 4, 781 AD. Although we cannot be sure of the exact date of its discovery, most historians agree it probably occurred between 1623 and 1625 AD. That was  when Jesuits missionaries and Chinese Christians in and around Xi’an began writing of its existence. Furthermore, ancient Chinese writings on metal and stone monuments in the country dating as far back as 1064 AD do not mention the Xi’an Stele. Thus, most historians suppose that the stone was buried sometime between 781 and 1064 AD.

This 283-year-long gap between the stone’s probable raising and its burial is a long stretch of time. Unfortunately, the two possible events in Chinese history that likely precipitated its burial occurred soon after it was erected.

The first is a rebellion against the Tang Dynasty that broke out among the military. Zhu Ci (朱此), a military general, led rebel forces in a takeover of Xi’an and deposed the emperor. For the name of his new dynasty he choose “Qin (秦)” and declared himself the “Daqin (大秦)” Emperor. (You may recognize this combination of Chinese characters as also referring to ancient Rome in the context of the Xi’an Stele’s inscription!) When the rebellion was quickly quashed and Zhu Ci executed in 784 AD, the Christians responsible for caretaking the stone possibly buried it to protect it from the restored Tang emperor who sought to erase any existence of the short-lived “Qin Dynasty.”

The second possible event was a direct religious persecution. A new school of thought was rising to power in China: Confucianism. The Confucians’ increasing influence in the Imperial Court precipitated a reaction against competing ideologies. Foreign religions were targeted. In China at the time, Buddhism was still considered a transplant from the West. (The West being northern India.) Less than a hundred years after the Stele was erected in 845 AD, Emperor Wuzong (武宗) began a widespread campaign against Buddhism. All foreign religions from the west of China were caught up in this fundamentally anti-foreign reaction. In addition to Buddhism, Zoroastrianism, Islam, and yes, Christianity were targeted. The Emperor began to confiscate religious land, such as temples and monasteries, regardless of religious affiliation. One thing notable about Wuzong’s methods is that he also defrocked the Buddhist and Christian clergy, forcing them to return to secular life. The Christians are mentioned by name in the Imperial edict announcing the campaign:

Examining into the teachings from the foreign lands in the Empire, We have discovered that there are over 3,000 monks from 大秦 … these monks also shall return to lay life. They shall not mingle and interfere with the manners and customs of the Middle Kingdom.

Thus, the Xi’an Stele may have been buried in an effort to save it from confiscation by the government during this brutal persecution. Whatever the circumstances, the burial achieved its likely purpose of protecting the monument from both enemies and the elements. When the Stele was unearthed nearly 800 years later, it was in near-perfect condition. By 1625 AD, the Stele began to attract attention and be recognized as an important find. Notably, the first people holding an inkling of its significance in the seventeenth century were Chinese Christians themselves — not the European missionaries.

Li Zhicao (李之藻) is considered one of the Three Pillars of Chinese Catholicism. In early 1625 AD, he received a rubbing of the Stele from another Chinese Christian, Zhang Gengyu (张赓虞), a friend of the late Matteo Ricci, the Jesuit who had sought to adapt Catholicism to Chinese culture.

During my residence in retirement [in Hangzhou] [Zhang Gengyu] … sent me a rubbing of an inscription of the Tang Era saying: “recently in [Xi’an], they dug out a stone bearing the title, ‘The Monument Commemorating the Propagation of the Luminous Religion in the Middle Kingdom.’ We have never heard of the name before. But is this not the same Western Holy Teaching that has been preached by Matteo Ricci?”

From Li Zhicao, news of the Stele’s discovery spread throughout Hangzhou in southern China. Many Jesuit missionaries and other Christians were hiding in that region after recent persecutions and unrest. Thanks to the Jesuits, the Xi’an Stele soon took the Christian world by storm. A Jesuit missionary in China, likely Nicholas Trigault, translated its inscription into Latin that year. French and Italian versions soon followed. Leading European scholars such as Edward Gibbon and Athanasius Kircher wrote of the Stele. Most of Western Europe, however, did not know what to make of it. In fact, Voltaire was a leading voice in society branding the Stele as “a Jesuit forgery.” It was hard for many to believe that at the same time Charlemagne set about converting warring tribes in Europe to Christianity, there were Christians in China performing similar efforts.

For the missionaries in China, however, the discovery strengthened their hearts and their purpose. The first Westerner to write of the stone was a Portuguese Jesuit, Father Alvarez Semedo. Historian P. Y. Saeki writes how Father Semedo felt at the time of its discovery:

“When he read the Chinese text he felt as St. Paul once had done: ‘God indeed had not left Himself without a witness!’ He thought that the long-felt desire of his predecessors, Matteo Ricci, Jules Aleni, and others was at last fulfilled, and the more he studied it the more delighted he was with the stone.” (Saeki, The Nestorian Monument in China)

The missionaries felt that the stone vindicated their efforts in China. In those dark times of unrest and persecution, the Xi’an Stele was a sign from God that their work in China was not in vain and that they were treading on ground that had heard the Gospel before.

Anastasia McGrath is a senior at Fordham University studying Chinese and a 2020-2021 Duffy Fellow.