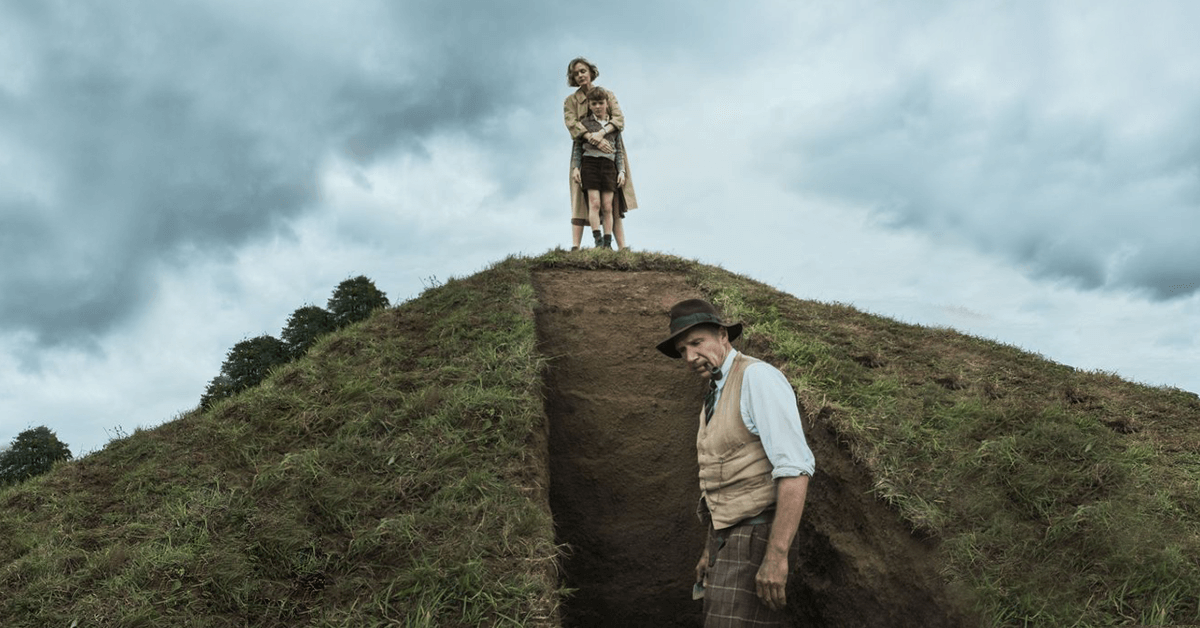 The discovery of the Sutton Hoo burial site in Suffolk, England, in the summer of 1939, marked one of the most remarkable archaeological finds of the last century. Netflix’s recent release, The Dig, explores the details of this extraordinary event and the importance of history, art, curiosity, and the transience of time.

The narrative unfolds mostly on the property of Edith Pretty (Carey Mulligan), who hires a learned yet self-taught archaeologist, Basil Brown (Ralph Fiennes), to excavate a series of mounds, which he believes could be of Anglo-Saxon origin (6th-7th c.). With a few assistants, Brown sets to work and slowly uncovers the formidable treasure. As news of the discovery spreads, archaeologist Charles Phillips (Ken Stott) arrives and takes over the project with a team of experts, relegating Basil to the margins. Tensions between Charles, Basil, and Edith mount over the proper care and ownership of the treasure. Growing increasingly ill, Edith ensures that the site and its rich objects are properly cared for, and Basil’s work acknowledged. In the midst of the excitement and drama, relationships shift and Edith’s son, Robert (Archie Barnes), grows closer to Basil and his wife May (Monica Dolan). As an energetic and thoughtful young boy, Robert embodies the spirit of curiosity and discovery that permeates the film.

The real-life story is every bit as engaging and remarkable as the Netflix version.

The initial archaeological investigations on Edith’s land in Suffolk were carried out right before World War II. These efforts uncovered fifty-six burials including two ships that were hauled to the site more than a third of a mile from the sea. Although the tradition of burying the dead with prized goods was not entirely new knowledge, the Sutton Hoo dig uncovered a wealth of evidence detailing the material culture and funerary rituals of the Anglo-Saxons. Among the treasures were military equipment, coins, silver bowls and spoons, and other luxurious objects. The latter were executed in solid gold with elaborate surface patterns in a variety of techniques (Figs. 1-2). These small, durable, and richly decorated pieces demonstrate the exquisite craftsmanship and creativity of those who created them.

Adapting John Preston’s 2007 historical novel of the same title, the producers of The Dig have created a film that allows viewers to step back in time – both the time of the Sutton Hoo discovery and the Anglo-Saxon past. Two of the more poignant moments of the film were when the viewers were encouraged to reimagine through the key protagonists (Basil and Edith) events from the distant past.

First, in the beginning of the film, Basil sitting by the water and observing the modern ship slowly making its way down the river against a backdrop of a complete silence that dissipated time. The viewer could imagine the recently-discovered Anglo-Saxon ship ceremoniously embarking toward its final burial destination.

Second, in the final moments of the film, Edith, nearing the end of her life, contemplating the night sky and the vastness of the universe from within the belly of the ship, alongside her son. Time collapsed, expanded, eternal.

Our distant past, of which we often know so little, has long intrigued us and incited our imaginations. We strive to connect with our histories, to understand what came before us as we define our purpose in the moment and determine what mark of our own to leave behind. Each of us conceives of their existence differently, but at the core of this is a desire for self-expression, purpose, and remembrance, whether implicit or explicit. Unlike the transience of our lives, what we create lives on.

Although it continues to delight and fascinate, the Sutton Hoo collection offers a distinct window into the past. It allows modern scholars to reconstruct aspects of Anglo-Saxon funerary practices, military history, and craftsmanship, but, perhaps most importantly, it allows all of us to appreciate human creativity.

One of my favorite objects from the Sutton Hoo collection is the pair of hinged clasps (Fig. 3). The main rectangular fields display a continuous pattern of interlocking motifs framing a central section with checkered designs. These visual elements were inlaid with garnet cloisonné and glass using the millefiori (“million flowers”) technique. With roots in antiquity, this method of manipulating glass yields multicolored patterns and rich surface decorations, in this case dominated by reds and blues against the gold background. This was clearly a prized possession, and an object that required great resources, skill, and creativity to execute. Today, it is difficult to determine the precise function of this pair of clasps, but it is possible that they were used to hold together a garment at the shoulders.

Another decorative field marks the curved ends of the clasps (Figs. 4-5). Although easily dismissed as containing curvilinear abstract forms arranged in a symmetrical pattern to either side of a central axis, upon close examination, two abstracted boars interlocking their bodies at the center emerge into view. They appear to be in combat over a middle ground covered with twisted gold wire filigree patterns. This visual scheme carries a narrative content, and possibly even a symbolic meaning. Unfortunately, this is lost to us today. Powerful animals have been used in art as symbols of strength and courage, and perhaps here the boars are included for this purpose. Nevertheless, we can appreciate the care and creativity with which the artist conceived and executed this section of the design. This was meticulously formulated and accomplished, and it is something that can eternally entice the perception and imagination of anyone who views it.

We seldom uncover the full picture of the past. The Sutton Hoo discovery continues to enchant while we seek the multiplicity of meanings and functions of its treasures. But just as we know little about those who created the exquisite objects of the Sutton Hoo, until recently we also knew little about the man whose effort led to the discovery of this important site. In the film, the work of the local excavator Basil Brown (Ralph Fiennes), a wise and modest man, is often overshadowed by the “experts” and members of prominent institutions who wish to claim the treasures. The fact that Basil Brown emerged only in recent years as a key figure of the Sutton Hoo excavations reveals that what we discover about the past remains contingent on the clues we seek and the kinds of questions we ask.

Displayed today in the British Museum, the Sutton Hoo treasure is available for all to see, appreciate, and study. Access to the objects in such a prominent public institution will enable their continued appreciation and future research for generations to come. In a way, this was the point made in the film as well. The tensions between Edith, Basil, the archaeologists, and the representatives of the British and Ipswich museums was evident throughout the narrative. Discovered on her property, the Sutton Hoo treasure belonged to Edith, although its universal value and the prominence it would bring to the institution that took it under its care were undeniable. In the end, Edith ensured the preservation of the Sutton Hoo treasure and wished for acknowledgement of Basil’s key role in its discovery. The latter did not occur until decades later, and that excavation of the past is a singular merit of this film, as it was of Preston’s novel.

History matters, and so does the art. Often, it is the material and visual evidence that lives on and offers glimpses into the past even when so much remains unknown. We can delight in the discoveries, and in the process appreciate creativity. Man has long sought to weave together past, present, and future. To uncover the purpose of life, and, in the process, leave a mark.

The words of the French philosopher and art historian Georges Didi-Huberman capture the value of material evidence, be it images, objects, texts: “Before an image, finally, we have to humbly recognize this fact: that it will probably outlive us … before it we are the fragile element, the transient element, and that before us it is the element of the future, the element of permanence. The image often has more memory and more future than the being who contemplates it.”

The image, the object, the text will live on, even when individuals fall into oblivion. It is up to us and future generations to tread carefully, dig deeper, and bring the works and their rich histories to light. The Dig encourages viewers to discover such pasts.