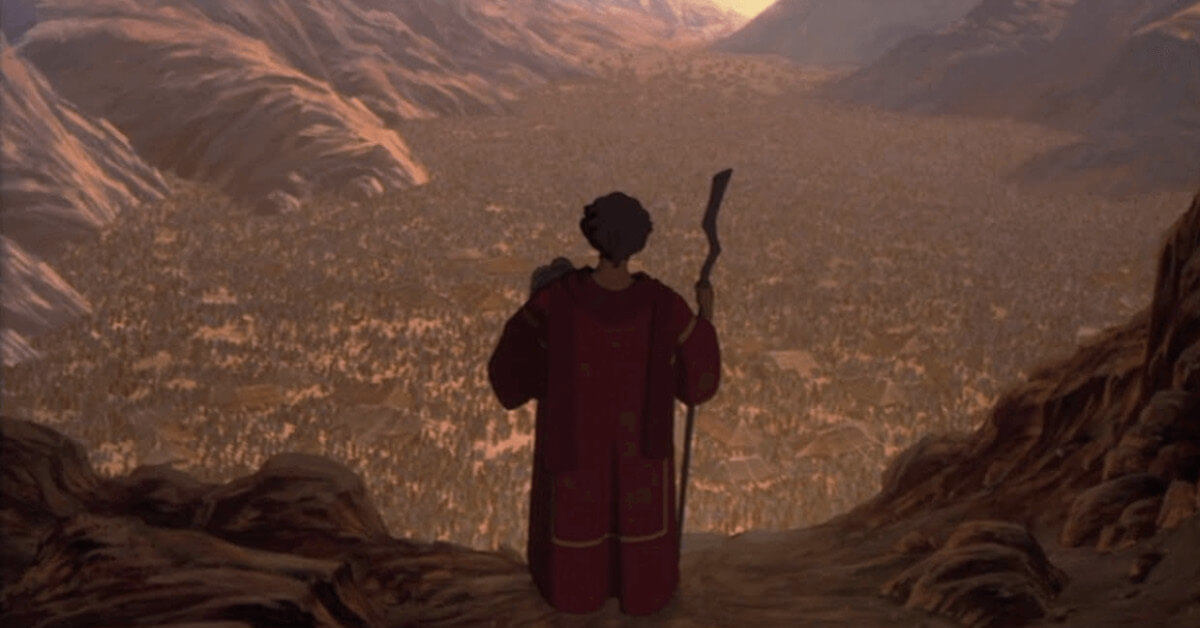 The Prince of Egypt, a classic animated film produced by DreamWorks Pictures, tells the story of the Book of Exodus, depicting the life of Moses, the Ten Plagues, and the eventual freeing of the Israelites from Egypt. Nearly twenty-five years after its 1998 release, it stands as an influential masterpiece, due to its beautiful animation and compelling score composed by Hans Zimmer.

When I was in Catholic elementary school, this film was played annually around Christmas in the classroom. (Yes, that’s odd, as The Prince of Egypt recounts the story undergirding the Jewish feast of Passover, which takes place in the spring, but I guess our teachers were looking for ways to keep us entertained at the end of the year.) Although created for children, the film does not shy away from dark themes regarding death, war, slavery, and suffering. Nor does it downplay spirituality and theology.

It was not until I was older and rewatched this film that I was able to see it in a new light and better grasp its main message. With a deeper understanding of cinematic storytelling, I marveled at the use of color as an essential part of the tale. The conflict between the Israelites  and the Egyptians, Moses (Val Kilmer) and Rameses (Ralph Fiennes), and, more broadly, God and Idols are all contrasted with the colors red and blue. The color palette enhances the story by adding stark visualization to the opposing forces within the work.

In the beginning of The Prince of Egypt, which closely tracks the biblical narrative, Moses’s mother, Yocheved (Ofra Haza), sends baby Moses off on the Nile River in a basket to protect him from the Pharaoh, who had ordered the death of male Israelite infants to prevent one of them from growing up to challenge him.

In this scene, Moses is wearing a red piece of clothing to match his siblings, Miriam (Sandra Bullock) and Aaron (Jeff Goldblum). Moses’s family are Jewish, and their matching attire connects them to their heritage and the ongoing conflict over Israelites being persecuted and enslaved in Egypt. Throughout the film, Israelites are associated with the color red through their clothing. The reason for using the color red could possibly symbolize the Israelite blood spilled by the Pharaoh’s violence and enslavement. Conversely, the color red quite literally makes the Israelites targets for the Pharaoh.

The Egyptian queen finds Moses in his basket and decides to raise him as her own son, believing he was sent to her by the Gods. Years pass, and Moses grows older. He wears the color red — the opposite of his foster-brother Rameses, who wears blue. Moses’s red attire as an adult connects him to his Israelite identity, despite him not knowing about his ancestry. However, the red Moses wears also serves to stick out from the blues surrounding him in Egypt. The blue worn by Rameses matches that of his mother and father and two high priests. Only Moses wears red in the palace, signaling that he does not truly belong to the family of the Pharaoh. Interestingly, Moses visually sticks out from his surroundings in Egypt, emphasizing the point that he does not fit there at all — like his fellow Israelites.

Later, after learning his true identity as an Israelite, Moses sings the song “All I’ve Ever Wanted.” During that scene, the sky turns purple, representing Moses’s clashing of identities. The contrast in colors enhances the theme of a struggle by merging the two lives of Moses — one as an Israelite and the other as the Prince of Egypt.

The color schemes also play a significant role in Moses’s relationship with his brother, Rameses. During the night of a large banquet, Moses is appointed Chief Architect by Rameses and he is given a blue jeweled ring in honor of his new title. This is the only piece of blue Moses wears in the film. The color and symbolism of the ring represent Moses’s role as the Prince of Egypt, the son of the Pharaoh. When Moses flees the palace, realizing he cannot stay after learning he is an Israelite and killing one of the guards for whipping another Israelite. He strips himself of his jewels and wig as if shedding his former identity. Moses considers taking the ring off but ultimately decides to leave it on.

When I was younger, I thought Moses only kept the ring out of affection for his brother. But now I think he did so as a reminder for the injustices he allowed to be carried out on his own people, the enslaved Jews, during his life at the palace. The fact that it is a piece of jewelry is significant: Moses was given a life of privilege and riches while the rest of his people suffered. Moses eventually returns to Egypt to request that Rameses let his people go. After Rameses refuses to free the Israelites, Moses gives the ring back to him.

The colors red and blue also come into play in the theme of God and Idols. Throughout the film, the God of the Israelites is represented by the color red while the Egyptian Gods are the color blue. This further serves to connect the Jewish God with the Israelite people. While Moses is in Egypt trying to convince Rameses to release the Israelites from enslavement, he calls on God to perform wonders on Earth. One of the first of these is turning the Nile river into blood.

The priests in Egypt and Moses face off in a demonstration of divine power, showing the miracles of each side’s respective Gods. The “false” Gods worshiped by the Egyptians are represented by the color blue. Their blue magic is meant to contrast with the the power of the one God of the Israelites who is associated with red.

During the plagues in Egypt, the works of God are once again represented by the color red. Prior to the plagues, Egypt is animated in a light blue color. During the “Plagues Song” sequence, the sky turns red, representing God’s manifestation in Egypt. The clashing between the red and blue represents the struggle between God and the Pharaoh who refuses to let the Israelites go. It also represents the clash between believers and non-believers. In this scene, the red largely represents God’s wrath.

Throughout the film, God is manifested as fire, even appearing to Moses as such. When Pharoah tries attacking the Israelites fleeing through the parted waters of the Red Sea, God literally comes down as a pillar fire in order to prevent the Pharaoh’s assault.

At the end of the film, the Israelites are led out of Egypt. Dawn is on the horizon, and the tone shifts from God’s wrath and fury to hope for a better future.

Rewatching this film feels like stepping back in time to my childhood. What makes it timeless is being able to appreciate new things with each new viewing. As a theology major, it feels so much more interesting to enjoy this work of art with a better knowledge of its religious context and the way in which an animated film, through its artistic use of color, can highlight the central religious theme.

Definitely worth the watch — especially as Jews everywhere prepare for the feast of Passover that commemorates this foundational Bible story!

Samantha Sclafani is double-majoring in Theology and Political Science and she is a 2021-2022 Duffy Fellow.